Will Modi not observe Manusmriti Dahan Divas on December 25?

In order to truly appreciate Ambedkar's legacy, we need to side with Dalits who burn copies of the discriminatory archaic text.

The ruling party at the centre observed November 26 this year as the "Constitution Day" with great fervour and enthusiasm. On that day, before beginning the debate, Prime Minister Narendra Modi defined it as "a ray of hope", with H for harmony, O for opportunity, P for people's participation and E for equality. It was a great message given by a person holding the highest electoral post in the world's largest democracy. He described the day as a "tribute to the architect of Indian Constitution, Dr Bhim Rao Ambedkar".

Tracing back to history, we find that Dr Ambedkar has always been a staunch advocate of equality and social justice.  For him, social justice, based upon equality, liberty and fraternity of all human beings, was the true basis for patriotism and nationalism. He not only supported any move to eradicate all forms of inequalities and discrimination on the basis of caste, race, sex, religion and wealth, but also advocated for unity and equality of all human beings and equal worth of men and women. He criticised the caste system in Hindu society, asserting it to be the root cause of social injustice to the scheduled castes and scheduled tribes. He also stressed that at the root of untouchability is the caste system, which in turn stems from religion. The root of the religion, similarly, is attached to Varnashram, while the root of Varnashram is Brahminism. Finally, the root of Brahminism lies in the source of political power.

Dr Ambedkar was against Manusmriti as it discriminates against fellow human beings. Manusmriti gives all kinds of comforts to the Brahmins, in order for them to commit all sorts of atrocities on the scheduled castes and scheduled tribes, and, in turn justifies their evil designs. Ambedkar alleged that the caste system, founded on Varnashrama Dharma, is the negation of social justice. Being a great supporter of women's liberation, Ambedkar also blamed the Varna system for their subjugation. He also alleged Manusmriti as solely responsible for the downfall of Hindu women.  In wake of the social justice and equality, Dr Ambedkar publicly burned the copies of Manusmriti on December 25, 1927 as a symbol of rejection of the religious basis of untouchability during the Maha Sangharsha of Maha Satyagraha.

Unlike the Constitution of India, Manusmriti restricts women from enjoying many rights such as education, independence, inheritance of wealth, etc. Seeing everything from the patriarchal lens, Manusmriti defines woman merely as a sex object who can never be an independent subject as she is always protected by the male counterpart from childhood to old age. It also supports sexual exploitation of the shudra (Dalit) women by upper caste men. 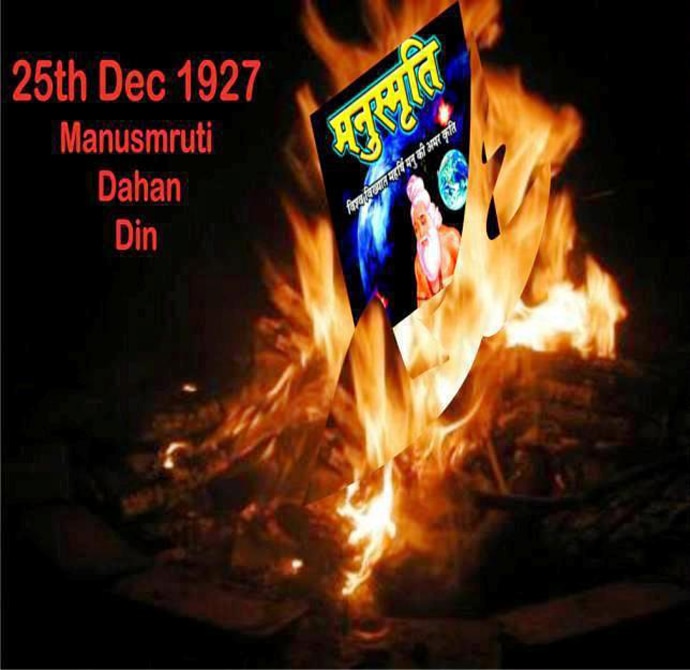 A poster on Manusmriti Dahan Din, observed on December 25 every year.

December 25 is celebrated by the Christians all over the world, including India, as the day to mark the birth of Jesus Christ. But the same date every year comes as the "Manusmriti Dahan Divas/Din" for Dalits, who at some places burn copies of this archaic text because of its discriminatory provisions.

At the time when we are heading towards making India a developed nation, the government needs to take actions and steps which make people feel as equal citizens and celebrate the days of common brotherhood throughout the year. The real tribute to Dr Ambedkar will be paid not merely by observing the Constitution Day but by following his principles of equality and social justice and eradicating all forms of discrimination and injustice. Let us pledge to secure the concept of humanity enshrined in the Indian Constitution structured by our forefathers.

#Dalits, #Narendra Modi, #BR Ambedkar, #Manusmriti
The views and opinions expressed in this article are those of the authors and do not necessarily reflect the official policy or position of DailyO.in or the India Today Group. The writers are solely responsible for any claims arising out of the contents of this article.