What has Swadheen Bharat Subhash Sena got to do with Netaji?

In the wake of Mathura violence, no one has done more damage to the cause of settling the Subhas Chandra Bose mystery as these conspiracy theorists.

From the moment the news of the terrible incident in Mathura broke, I began to have a bad feeling about it.

Two days later, it's getting worse. I am entitled to think that way because this so-called "Netaji cult" group was practically dormant until recently. And just when things were moving towards a resolution - in one or the other - of the mystery surrounding the fate of Subhas Chandra Bose, things have turned ugly.

Names of two godmen have cropped up in this melee. One is Jai Gurudev. The Subhash Sena cult, it has been reported, was a splinter group of his followers. The original followers thought Jai Gurudev himself was Subhas Chandra Bose. The splintered members in turn felt that one Mauni Baba was Netaji and that he was going to make reappearance in next two months.

Also read - Why Netaji 'gold tooth' story has no teeth

Now, there are two ways to analyse this narrative. Ridiculing it all, the entire Netaji mystery issue included, would be a lot easier. Even a class 8 student could tell that these Babas couldn't have been Netajis.

The other way is to try and go behind this veritable "wilderness of mirrors".

The cult aspect could be dismissed lightly but not the Netaji mystery. It is a subject matter serious enough for governments, courts, commissions to regard it as a "matter of public importance".

Both Jai Gurudev and Mauni Baba have one thing in common: Their reported linkage to Gumnami Baba - the name given to an unseen, unpublicised man who lived in different parts of UP from 1956 to 1985, and has come to be regarded by many to be Subhas Bose in hiding.

So we actually have three holy men instead of two.

The reason why many of Jai Gurudev followers carry the misconception that he was Subhas Bose has to do with Gumnami Baba. From what I know, Jai Gurudev probably met him and then made a public announcement that he'd produce Netaji at a public rally.

Jai Gurudev was never a small fry. He had a massive following, even in the 1970s. There are pictures of who's who of Indian politics, including Atal Bihari Vajpayee and LK Advani, sitting cross-legged on the floor next to him. Could a man of his stature and influence made such an announcement just like that?

But the unseen Gumnami Baba was not game. He refused to budge from his position that his coming out was not in national interest. He feared deaths of many innocents, among other complications.

At the same time, he did not approve of Jai Gurudev and regarded him, for whatever reasons, as "Indira's man". The following picture is illustrative because there are pictures of Jai Gurudev with other leaders as well. On January 23, 1975, standing before a swelling crowd of several thousand chanting "Netaji-Netaji" in the sprawling Phool Bagh area of Kanpur, Jai Gurudev did not know what to say.

He mumbled something which sounded to others as if he was claiming that he, (Jai Gurudev) himself, was Subhas Bose. The chants turned to jeers and disorderliness gave way to incidences of stone pelting. Targeted with shoes and fists, Jai Gurudev had to make a hasty retreat to safety.

The case of Mauni Baba, who seems to have surfaced from nowhere in the 1990s in Sitapur district of UP is no less strange. His followers have been claiming that he was in fact Gumnami Baba/Netaji, whose reported death in 1985 was marred by a controversy.

Also read - Who was Gumnami Baba, if not Netaji?

The people who wreaked havoc in Mathura were essentially Mauni Baba's followers. While there is no evidence to link rustic sounding Mauni Baba with a sophisticate Gumnami Baba, there are a number of people who continue to make or support the claim publicly. Chief among those who has been propagating or fanning mindless conspiracy theories about Netaji is Hindu Mahasabha leader Rajyashree Chaudhuri - said to be a distant kin of Bose.

Through her public talks, media briefings and Facebook posts, Rajyashree and people associated with her have circulated fantastic accounts which would make even Dan Brown's jaw drop.

There are posts where she is linking Netaji mystery to the Illuminati. The following screenshot shows her sharing a post containing a collage of Mauni Baba's pictures put out on Netaji's birth anniversary. No one has done more damage to the cause of the settling the Netaji mystery as these conspiracy theorists. None of them would do anything which can be regarded as original and constructive.

But they are quick to join the bandwagon with their preposterous claims once something has taken off. The cult responsible for Mathura violence had no role in declassification movement that has been build up over the years by the members of Mission Netaji, a pressure group this writer is part of, and members of Netaji's family.

But once we had succeeded in drawing national spotlight to it, they filed a PIL in Madras High Court seeking declassification with a most absurd claim that they'd produce Netaji in flesh and blood.

Such tactics cause severe damage to bona fide efforts of others as they hand out ready-made ammo to those not keen on settling the mystery. Remember that incident of an out and out fake letter alleged to have been written by Jawaharlal Nehru to Clement Attlee alleging that Netaji was a war criminal? It was made full use of by those who think nothing of Netaji mystery or even the man himself.

In that respect, these conspiracists have functioned as Trojan horses. They pose themselves as "Netaji lovers" (a silly sounding term used in social media) and whatever they do just end up queering the pitch of sincere efforts mounted by others. Sabotage from within, in the other words.

Also read - Mathura violence: Who are these Netaji-loving 'Satyagrahis'?

Sabotage is what I suspect happened in Mathura. Why?

Mauni Baba, in fact, did not even follow rudimentary English. In 2003, a rumour went around that Justice Mukherjee Commission of Inquiry could summon him. And so he vanished from Sitapur.

Those who brush aside the possibility that Gumnami Baba could have been Netaji as a baseless conspiracy theory overlook certain basic facts.

When the cigar-chomping baba, who never allowed himself to be photographed, was reported dead, his belongings - largely books and correspondence in Bangla and English - were scoured through by the local police.

Some kind of connection to Bose was revealed. The matter was thoroughly investigated and positively linked to Netaji by local journalists with no axe to grind in upholding an unknown entity as a Netaji at a time when Rajiv Gandhi was at his peak of popularity.

At that point, Lalita Bose, Netaji's real niece, arrived in Faizabad. Intrigued and personally convinced that Baba was her uncle, she moved the Allahabad High Court seeking an inquiry after she was rebuffed by the state government.

The Justice Mukherjee Commission of Inquiry (1999-2005) looked into this angle and concluded that the evidence for it was not "clinching". In 2010, some off-the-record comments of justice Mukherjee were inadvertently recorded by a documentary film maker.

The judge said that while he had reached an opinion that Gumnami Baba was indeed Netaji, but he was not able to prove it on account of a resistance from the government and non-cooperation of certain members of the Bose family. Mukherjee, a former Supreme Court judge, has since then repeated his personal opinion in private meetings.

In 2013, the Allahabad High Court gave its order in the case originally filed by Lalita Bose. The court surveyed the entire matter and stated the "materials and belongings of Gumnami Baba are national assets and must be protected for future generations".

The court directed that they be moved to a local museum. The court also suggested that an inquiry headed by a retired judge be carried out to ascertain the identity of Baba, "treated as Netaji by the substantial section of public" - including some of Bose's former associates whose integrity was not questionable.

In March 2013, an adjournment notice was moved in the state Assembly by members cutting across party lines.

In February, recapitulating all this and much more to UP chief minister Akhilesh Yadav, the Bose family and Mission Netaji members pressed for an inquiry as suggested by the Allahabad High Court. 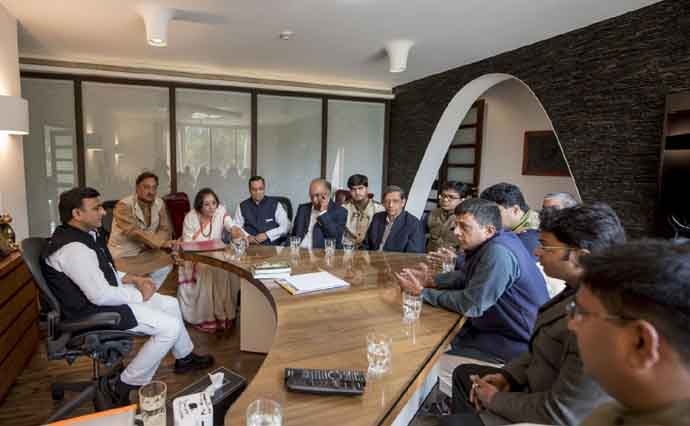 Meeting with UP CM Akhilesh Yadav.

Yadav was all ears. After our meeting, the transfer and preservation of Gumnami Baba's belongings was fast tracked. That's why Gumnami Baba made news some time back.

Last heard from my sources Lucknow, the paperwork regarding the setting up of a commission of inquiry was all but complete.

And just before a formal announcement could be made, hell broke loose in Mathura.

And now inputs, coming my way have it that in view of violence in Netaji's name, the decision to announce a probe into the Gumnami Baba's identity has been put on hold.

#Akhilesh Yadav, #UP, #Netaji, #Mathura Violence
The views and opinions expressed in this article are those of the authors and do not necessarily reflect the official policy or position of DailyO.in or the India Today Group. The writers are solely responsible for any claims arising out of the contents of this article.