Dalits-Muslims will be Mayawati's trump cards in UP polls

The two communities account for 38.5 per cent of the state's population - more than enough to give any party absolute majority.

In the 2007 Uttar Pradesh Assembly polls, Mayawati's Bahujan Samaj Party (BSP) gave tickets to 61 Muslim candidates - 15 per cent of the total BSP candidates in the elections.

In the 2012 Assembly polls, the count rose to 85, which was 21 per cent of the total number of the candidates from the party.

And for next year's Assembly polls, the party has announced to field 100 Muslim candidates - almost 25 per cent of the total number of candidates that the party would field for the 403-seat Uttar Pradesh Assembly - as party supremo Mayawati has made it clear that the BSP would not form any pre-poll alliance.

From 15 per cent to 21, and now to 25 per cent, this gradual increase in the number of Muslim candidates is a clever ploy, and it can win BSP the election if it works as intended, because the timing is opportune and the atmosphere is conducive.

Mayawati's focus is on the Dalit-Muslim combine this time around. Dalits and Muslims account for 38.5 per cent of Uttar Pradesh's population - more than enough to give any party absolute majority in the Assembly. 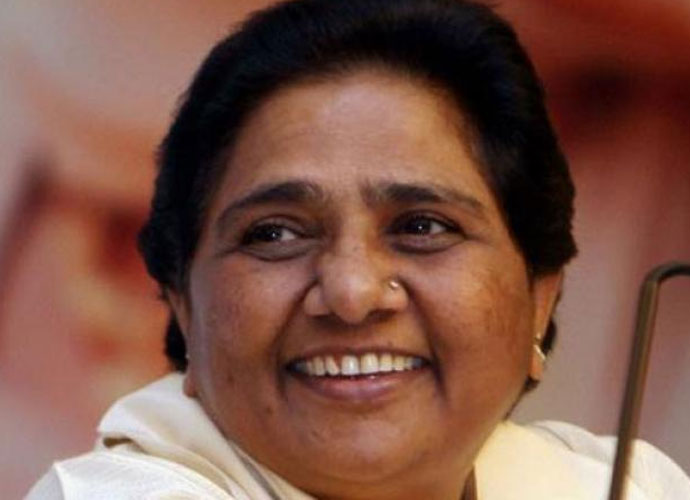 Mayawati may have a potent weapon in her hands.

And in the prevailing circumstances, it is expected to come down further and here Mayawati sees her prospects. The Muzaffarnagar riots and its aftermath with stories of hell in the camps for the riot-affected people and the Dadri lynching incident have eroded the credibility of the SP among the Muslims.

To give her social engineering a Muslim tilt this time around, Mayawati has decided to field over 100 Muslim candidates, mostly in the areas of dense Muslim populations of the western Uttar Pradesh. And we should not be surprised if the count of Muslim BSP candidates goes further up.

It's a natural corollary then that the number of upper caste candidates has to come down.

Doing so will address the chances of Dalit voters slipping away from the BSP fold as happened in the 2012 Assembly polls. According to the CSDS analysis, 86 per cent of the low caste Jatav voters chose the BSP in 2007 which drastically came down to 62 per cent in 2012. Even more telling was the reduction in the Balmiki vote share which came down by more than 40 per cent - from 71 per cent in 2007 to 42 per cent in 2012.

The major reason behind this then was ascribed to Mayawati's increasing tilt towards upper caste voters. Dalit voters, on the other hand, felt alienated and disillusioned.

Also, betting on the upper castes did not go well for Mayawati in the 2012 polls. Even though she had given tickets to 117 upper caste candidates in 2012 - 22 less than that in 2007 - they were still the largest block of the BSP candidates.

But according to the CSDS analysis, there was only a small increase in the upper caste vote share of the party - that of Brahmins from 16 to 19 per cent, Rajputs from 12 to 14 per cent and other upper castes from 15 to 17 per cent.

This wasn't anywhere near to compensating the huge loss of Jatav and Balmiki votes that the BSP suffered. Even the share of the other scheduled castes in the BSP's overall vote share came down by 13 per cent - from 58 per cent in 2007 to 45 per cent in 2012.

Now if Mayawati goes full throttle to win over the Dalits, and works to add more Muslims to her vote base, from the existing 20 per cent, she will have a potent weapon in her hands.

And to support her caste equations, she has the second-most important electoral factor in her favour this time around - anti-incumbency. With her social engineering and anti-incumbency against the Mulayam Singh Yadav government, she excelled in the 2007 Assembly polls.

In 2012, along with the disenchantment of a large section of the Dalit voters, she had to deal with the anti-incumbency sentiment accumulated over five years of her rule. Added to it was the promises of change from a young leader - Akhilesh Yadav - who had a clean slate and professional education to back his credentials.

The 2012 polls saw greater jumps in the SP's Brahmin and Rajput vote shares than that of the BSP. Thus the Brahmin vote share jumped from 10 to 19 per cent and that of Rajputs from 20 to 26 per cent, according to the CSDS analysis. In fact, there was even a decline in the Yadav vote share - from 72 per cent in 2007 to 66 per cent in 2012. But it was compensated well by an increase in Kurmi/Koeri (17 to 35 per cent), Jatav (four to 15 percent) and Balmiki (two to nine per cent) vote shares.

So the upper castes showed a greater tilt towards the SP last time around in the absence of any credible challenges from the BSP and the Congress - the traditional sticking points for the upper caste voters.

Now that the BJP is in the race, after winning 73 out of the 80 seats in Uttar Pradesh (along with ally Apna Dal won two seats), in the 2014 Lok Sabha elections, with a vote share of over 42 per cent, the BSP may feel it is better to utilise its energy in galvanising its traditional vote bank - the Dalits - and add a community to its profile that is traditionally anti-BJP and is feeling disenchanted with the SP - the Muslims - and leave the upper castes and the OBCs, the traditional SP supporters, to it.

The BJP strategists are wary of Mayawati's efforts to create a winning Dalit-Muslim alliance and the party has started a campaign to counter it. The BJP is trying to send out a message that the Dalits and Muslims have been historical adversaries. Only the poll outcome will tell how effective this campaign and counter-campaign is going to be.

This doesn't mean that the BSP would abandon the focus on upper castes in its social engineering, but it would restrict its approach towards them to avoid alienating the core constituency it is trying to win with.

And the other political block, the Congress, is down and out even if there are reports that Priyanka Gandhi would spearhead the poll campaign in Uttar Pradesh. If the party performs well, it will be nothing less than a miracle.

#Dalit, #Muslims, #UP Polls, #Mayawati
The views and opinions expressed in this article are those of the authors and do not necessarily reflect the official policy or position of DailyO.in or the India Today Group. The writers are solely responsible for any claims arising out of the contents of this article.