Sexism is no way to outrage.

There's sexism that ensured Hillary Clinton didn't win the US elections 2016, and there's sexism to, lo behold, protest that she didn't. Not really, it's a sexism to "expose" - quite literally - the future FLOTUS, Melania Trump, the Slovenian-American third wife of US President-elect Donald J Trump. How exactly? No, not how she worked illegally for a while when she first came to America in the 90's, but pretty much sharing her "nude photo shoots" that she did during her modelling days.

Exactly what is the import of this tweet? Just like women across the world were disgusted - and disgusted they were - when Melania's history of employment, some of which required her to pose in the nude for a couple of French and American magazines, to shame her and her husband, they are disgusted once again when those very images are regurgitated as the reason why she is unfit to be the next First Lady.

Consider what noted author and historian William Dalrymple had to say in a tweet, now deleted (with apologies).

Or, for that matter, how the nutcase of a filmmaker - Ram Gopal Varma - "welcomed" Melania's coming stint as the "hottest 1st Lady", oh also by comparing a rather flattering picture of the next FLOTUS with the current one.

For some reason I like the present First Lady much more than the previous..can anyone tell me why????? pic.twitter.com/itxmlyryO5

US got its hottest 1st Lady since all wives of presidents starting from George Washington ..1002 kisses to Trump for making America Greater???? pic.twitter.com/fAgff9Dc1X

Is this tabloidisation of good sense? Is this just how a regular, liberal male behaves when confronted and confounded by the different ways women can be women? Isn't it amazing that exactly the Republican, diehard conservatives discredited Hillary Clinton for being a "pantsuit aficionado", for being the most competent person in the government and outside of it, they are discrediting and shaming Melania Trump for being at the opposite end of the spectrum and for earning a living for herself by modelling in the days before she met Donald Trump? 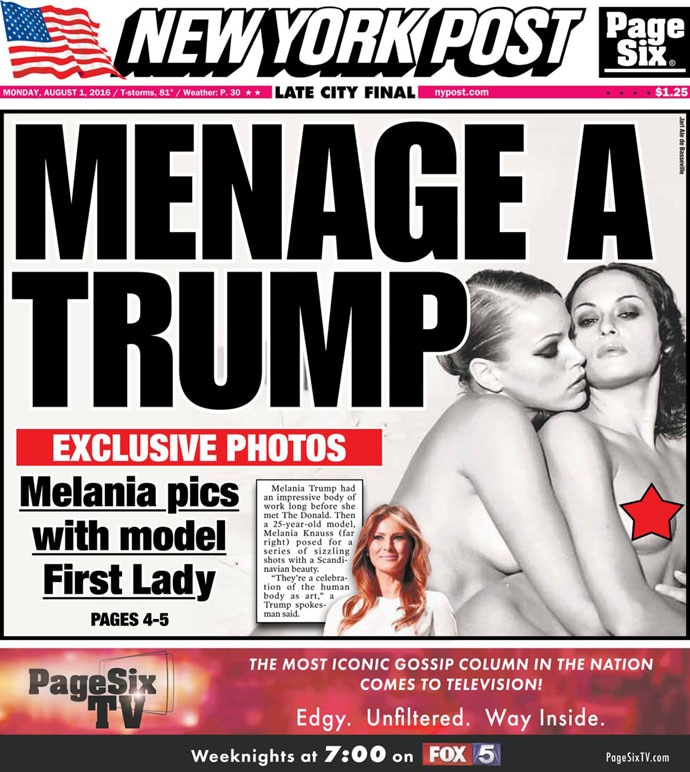 How is this different from the Times of India zooming in to Deepika Padukone's cleavage, and voila, discovering CLEAVAGE!? How would seeing Melania's nude photo shoot change/impact her upcoming stint as the next FLOTUS? And why should it? What exactly are these journalists and authors and filmmakers trying to imply here?

It's appalling that in the wake of such an overwhelming tide of misogyny against Hillary Clinton, couched under various excuses - corruption, in bed with Wall Street, establishment stooge, imperial feminist - as if any of the presidential predecessors were any different, the so-called voice of resistance would also choose to ridicule the woman to hurt the man.

democracy a virtue till your candidate wins, women made easy target when you lose. world better off without those kinds of ideologies

Have all the men become Donald Trump today? Or are all men secretly Donald Trump, have always been, will always be?

It's a depressing day to be a woman today. In America. In India.

Editor's Note: We have changed the photo of Melania Trump originally used in the article

Also read: Why is America so afraid of women?

Watch: Are Americans uncomfortable with women in power?