The BJP government’s response to #MeToo has been inadequate. MJ Akbar stepping down does not make it better

Even as we celebrate the brave women who ensured impunity met accountability, we need to put some tough questions to the government.

After days of bristling and blustering, MoS external affairs MJ Akbar stepped down from his post on October 17.

Akbar had been accused of inappropriate behaviour to sexual assault by several women, who had worked under him in his long career as a journalist.

Undoubtedly, Akbar’s resignation is a big win for the gender justice movement — a concrete proof that women’s voices matter, that powerful men can, and will, face consequences for their actions.

However, it is no credit to the BJP government at the Centre.

Ever since Akbar stepped down, social media has been abuzz about how there was pressure on him “from the very top”, that the RSS “made it clear” it was not happy with the state of affairs, and that women ministers felt the situation had become “untenable”.

No, the government, the BJP and RSS do not get brownie points for this. In fact, their actions have been shockingly inadequate.

MJ Akbar is still a Rajya Sabha MP, he has slapped one of his accusers with a defamation case, and the government has not spoken a word against him.

His resignation is not justice served — it is the first, bare minimum step. It does not mean the battle is over. And it most definitely does not whitewash the conduct of the government, which needs to answer some tough questions. MJ Akbar resigned as MoS, but he remains a member of the Rajya Sabha. (Photo: PTI/file)

Not pulling up a minister for allegations as serious as this is not just moral irresponsibility. It shows a worrying mindset that believes sexual harassment at workplace is not a serious enough issue. And this mindset now seems visible not just in acts of omission, but of commission.

According to reports, the government has rejected a proposal by one of its own ministers — Maneka Gandhi, the only one from the ruling establishment to take a firm stand on #MeToo —to set up a committee of retired judges to probe the allegations that have surfaced on social media. Instead, the government will set up a group of ministers (GoM) under Rajnath Singh to examine anti-sexual harassment laws and guidelines in force in the country.

It is not clear yet if the GoM will also perform the important job the panel proposed by Maneka was supposed to do.

Let’s go over the BJP and the government’s response to the #MeToo movement.

Breaking the BJP’s official silence on the issue, Amit Shah on October 12 seemingly questioned the truthfulness of Akbar’s accusers, saying: "We have to check the veracity of the post and the person who posted it. You can also post something using my name. We will definitely look into the issue."

All the usually fiery Smriti Irani had to offer was: “I appreciate that the media is accosting his (former) female colleagues but I think it is for the gentleman concerned to issue a statement (and) not for me because I was personally not present there.”

Things get worse as you go down the hierarchy — Union Minister of State for Shipping and Finance, Pon Radhakrishnan, had said: “If someone makes an allegation that such a thing happened.....when the incident happened we were playing together while in class 5....Would it be fair? "This (MeToo movement) is the result of the behavior of some people who have perverted minds.”

BJP MP Udit Raj had said #MeToo was “the beginning of a wrong practice”, since women are known to extort money and honey-trap men and cannot always be trusted.

Our otherwise eloquent Prime Minister, who gave us the inspiring 'Beti Bachao, Beti Padhao' slogan, has said nothing at all.

The BJP’s track record on the gender justice issue is none too shiny. Its state ministers organised rallies in favour of the men accused of gang-raping and killing an eight-year-old girl in Kathua. 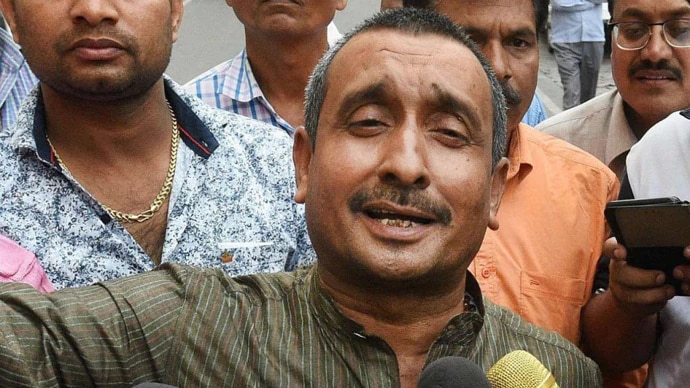 Its Unnao MLA, Kuldeep Singh Sengar — accused of raping a woman whose father died in police custody after she complained — continues to remain in the party.

The BJP also has the dubious distinction of having the most number of MPs and MLAs accused of crimes against women.

The #MeToo movement could have been an opportunity for the party to improve its credentials. #MeToo is more than about one person. It’s about women challenging an exploitative culture ingrained since ages.

Instead of recognising it for the defining moment that it could have been in how genders interact with each other, the BJP government chose to make it about its minister.

Not caring if this approach kicked in the gut a nascent movement that seeks justice for the traditionally disadvantaged, the party decided to brazen out the accusation, and backed down only when it realised it was facing far too much bad press for an electorally inconsequential minister.

The brave women who spoke out in the #MeToo campaign have done their part. It is now up to institutions to redress their grievances, and come up with mechanisms to usher in a culture where it is easier to report crimes and expect justice —something every citizen of this country is entitled to. The BJP government has so far failed terribly in rising to the occasion.

#Rape Culture, #BJP, ##MeToo, #MJ Akbar
The views and opinions expressed in this article are those of the authors and do not necessarily reflect the official policy or position of DailyO.in or the India Today Group. The writers are solely responsible for any claims arising out of the contents of this article.