Fear Factor: The different kinds of dread that are pushing the main Telugu parties to rally with the BJP

There is very little in common between Jagan Mohan Reddy, Chandrababu Naidu and KCR. Except for their sudden warmth to the BJP on key political issues. What explains this camaraderie?

It is a case of political expediency, political correctness and political consolidation for the Telugu parties — the YSR Congress (YSRCP), the Telangana Rashtra Samithi (TRS) and the Telugu Desam Party (TDP) — in their varied stances vis-à-vis the Bharatiya Janata Party (BJP)-led National Democratic Alliance (NDA) at the Centre.

They are all rallying behind the BJP for reasons that are not beyond anybody’s guess. How and why has the BJP suddenly become the magnet attracting these parties, obfuscating the individual political ideologies of these diverse groups?

Simply put, it is the fear factor that drove the three regional parties to toe the BJP line.

For both YSR Congress and TRS, it is the need for the funds allocated by the Centre for their respective states. Further, both the parties apprehend a threat that the BJP would become their primary political rival in their respective states, considering the systematic strengthening of the BJP.

For the TDP, it is the fear of possible legal actions — and also the threat of going extinct as many of its leaders are crossing over to the BJP.

The YSR Congress showed some gall by opposing the Triple Talaq Bill. The party voted against the Bill in Parliament — owing to political expediency back home. The BJP didn’t require any numbers in the Lok Sabha. Even though none of the three parties — TRS, YSRCP and the TDP — from the two states is a partner in the NDA, the TRS and the YSRC announced they would extend issue-based support to the Centre at the very outset of the Modi 2.0 regime.

With terribly strained relations with the BJP, and after walking out of the NDA, the TDP had to maintain a low profile after the elections. This was inevitable considering the party’s fierce posturing against the BJP in general — and Narendra Modi in particular — before the polls. It is still fresh in the memory of not only Modi and Amit Shah (who apparently don’t forget animosity meted out towards them so easily), but even in the minds of people across the country.

There is no background for evolving a policy on issues like the abrogation of Article 370 for the three political parties in question. This is because they are not national parties and they are more concerned with regional development.

Yes, they may have adopted some line of thought concerning the Uniform Civil Code and the construction of the Ram Temple in Ayodhya, but surely not a loud one in that sense. It's also about money: Jagan, who apparently inherited empty coffers from his predecessor, needs BJP for funds. (Photo: Reuters)

As for the TRS and the YSRCP, they pursue a ‘left of centre’ political policy. The TRS went to the polls alone in the 2014 Assembly polls. Even in the 2018 Assembly elections, despite its cordial relations with the All India Majlis-e-Ittehaadul Muslimeen (AIMIM), the party went to the polls by itself.

Thus, the TDP’s proximity to the BJP could not be underrated.

TDP supremo N Chandrababu Naidu reportedly now fears an offensive by Andhra CM YS Jaganmohan Reddy. The slew of announcements and actions by Jagan — like the constitution of a cabinet sub-committee into the Amaravati case, apparent attempts to scrap the power purchase agreements (PPAs) with some private power companies, scrapping the Polavaram project contract — have lobbed bombshells in the TDP camp. Time to rethink: After straining relations with the BJP, Chandrababu Naidu needs a Plan B. (Photo: Reuters)

While Jagan has been reportedly maintaining that the deals were not transparent and they need a probe, the TDP camp has been apprehending a threat of getting entangled in a maze of issues. Apparently to save his skin, Naidu was quick enough in softening his stand against the BJP — and supported the Centre in the abrogation of Article 370.

The TDP strategically abstained from voting in the Rajya Sabha on Triple Talaq to ensure that the Bill sails through. Not that its numbers are of any crucial value here (as four of its MPs migrated to the BJP) — yet it abstained in favour of the Bill to build the proverbial bridges with the BJP that were burnt before the polls.

George Orwell’s ‘Big brother is watching you’ at every stage must be haunting the TDP — which even supported the Amendment to the Right To Information (RTI) Act.

KCR’s move to abstain from voting on the Triple Talaq Bill politically makes a lot of sense for him. His decision to ensure a smooth passage of the Bill would please the BJP, which is slowly amplifying its offensive against him back home in Telangana, buoyed by its victory in four Lok Sabha seats in the recent election. KCR apparently feels he could fritter away the rhetoric of the state BJP — which is systematically upping the ante — through his “benign” support to the Centre.

This top-down approach may help KCR in dealing with local leaders — also, the TRS needs funds from the Centre for its lofty programs. 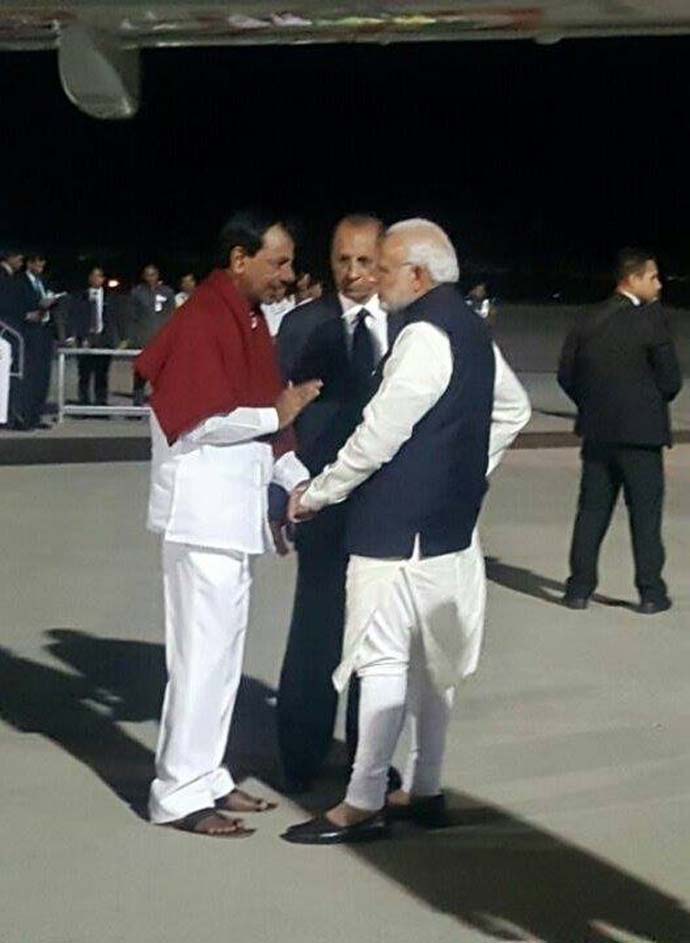 Keeping it cordial: KCR also needs funds from the Centre for the lofty programs he's promised his state. (Photo: Facebook/@TelanganaCMO)

A phone call from Amit Shah is said to have resolved TRS’ knotty policy decision and acted as an ice-breaker. Another call to the CM, in the form of consultations and solicitation of support for the abrogation of Article 370, apparently also did the trick in favour of the NDA.

As far as the J&K issue is concerned, the ruling YSRCP and TDP voted in favour of the abrogation and creation of two Union Territories.

YSRCP Parliamentary Party chief V Vijaya Sai Reddy also dared to hold the late Jawaharlal Nehru in poor light while singing paeans to Narendra Modi for deciding to emancipate the trouble-torn state from the clutches of terrorism and poverty.

The TDP had hardly any choice but to support the Bill. 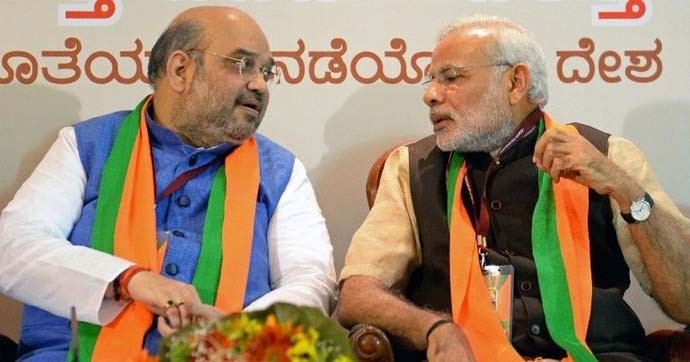 Why did Jagan sail with the Centre in RTI and Article 370 when he had no qualms about opposing Triple Talaq?

Jagan would not want to lose the trust reposed by the Muslim minority vote bank whose contribution to the YSRCP’s victory cannot be undermined. The RTI that gave him (and KCR) the proverbial whips to crack on the ruling parties in their respective states should not be used by the current Opposition to pay them back in the same coin — it is for this reason that these two leaders have thrown their weight behind the Centre in altering the service conditions of the Information Commissioners.

Jagan called on the Prime Minister amid the debate over Article 370 in the Lok Sabha and presented his long wishlist to Modi. In response, Modi nodded and smiled in his inimitable style.

Is it not a crowning glory in the hats of Modi and Amit Shah that their detractors are now toeing their line in a blatant appeasement bid?

Post your comment
#Telangana Rashtra Samithi, #Telugu Desam Party, #YSR Congress, #Modi 2.0
The views and opinions expressed in this article are those of the authors and do not necessarily reflect the official policy or position of DailyO.in or the India Today Group. The writers are solely responsible for any claims arising out of the contents of this article.