Cabinet reshuffle: 10 things you should know

By elevating Nirmala Sitharaman as defence minister, Modi has killed three birds with one stone.

Every Cabinet reshuffle gives us a sense of the state of play in a government and the mindset of its chief executive. So what did we learn from the Narendra Modi government's reshuffle 2017?

A) This is a government of Mr Modi, for Mr Modi, by Mr Modi. The stamp of the "supremo" is written all over the reshuffle.

Yes, there were strong inputs from Amit Shah, yes the RSS made a few suggestions, but in the end, Mr Modi has chosen HIS team: no outsourcing of the process to any external authority, be it the RSS sarsanghchalak or any senior group of ministers.

The Cabinet, as it stands today, is an extension of the PMO secretariat where South Block closely monitors ministers. If UPA had its GOM (Group of ministers) system to resolve critical issues, this is a PMO-driven system.

B) By elevating Nirmala Sitharaman to the high-profile role as defence minister, Mr Modi has killed three birds with one stone. He has grabbed the headlines as a strong votary of women power in governance (Smriti Irani too is now in a double role and the CCS has two women for the first time); he has also ensured the PMO (read Ajit Doval) will continue to have a major say in defence and strategic affairs and he has sent out a firm message to senior male colleagues eyeing the post: I don't trust you enough just yet. 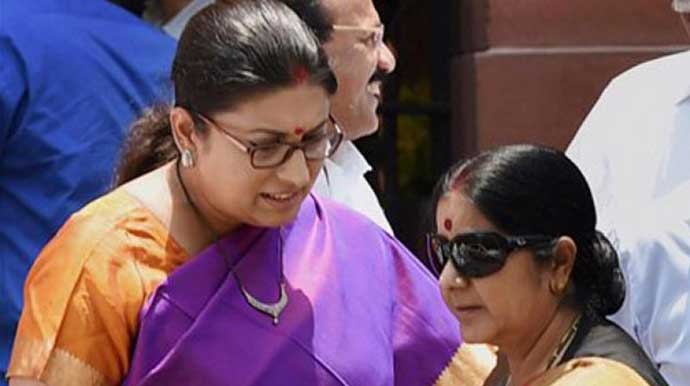 Two women in the CCS for the first time, with Sushma Swaraj. Photo: PTI

C) Mr Modi implicitly trusts bureaucrats more than politicians. We've seen this in Gujarat too when Mr Modi was chief minister: being an electable leader with a mass appeal doesn't make you a good minister in the Modi universe. By drafting in two bureaucrats from "outside" and by giving ministerships to two first-time bureaucrat-MPs, Mr Modi has reaffirmed his faith in those with administrative experience rather than experiment with professional netas.

In 2014, Mr Modi in the euphoria of his election victory had chosen to give the political class the benefit, but this time, he's gone the other way by giving bureaucrats key ministerships in the hope that they will deliver in the limited period left.

It also suits Mr Modi's style: bureaucrats, after all, are known to follow orders, mass politicians like to carve their independent fiefdoms.

D) Modi's government has little space for old style caste/regional loyalties. Gujarat and Himachal go to the polls in November December, but both states haven't been given fresh representation while Karnataka which goes to the polls in May next year has only one new face to offer.

While there is a Dalit face in Virender Kumar and two minority members (Hardeep Puri and KJ Alphons), the traditional caste/community calculations aren't a major factor. In fact, if anything, there is a return to a strong forward caste messaging, especially in north India.

E) Merit has been rewarded even as mediocrity has been tolerated. The elevation of Piyush Goyal and Dharmendra Pradhan is evidence of the former, the continuance of a Radha Mohan Singh in the crucial agriculture ministry and a Ram Vilas Paswan in consumer affairs is proof of the latter.

There has been a performance evaluation but it hasn't been as ruthless as some might have expected (or feared).

F) Many of Mr Modi's flagship programme ministries are floundering so many of them will now have new occupants.

Then, be it skill development, Namami Gange, Smart city projects, Make in India, the prime minister has chosen to push for change with ministers he hopes will fulfil the promise of "achhe din" before it's too late.

G) Mr Modi doesn't like the Shiv Sena and isn't obliged to Nitish Kumar. It is yet possible that Mr Kumar's JD (U) will be accommodated at some stage in the near future but for now, the prime minister has chosen to keep his new found ally in Bihar waiting.

As for the Sena, the prime minister would one senses like to get rid of a long standing ally who keeps targeting him. This is a purely BJP-driven reshuffle where allies will have to accept the crumbs thrown at them. Unlike with the UPA, there are no DMKs to arm twist the government this time.

H) The idea of "maximum governance and minimum government" is a nice catchy slogan but tough to implement. With 76 ministers including the prime minister, this is not a small government. The lal battis may have gone but no one wants to lose the perks of power. A few ministries have been reshaped but the idea of fewer ministers hasn't yet taken off.

J) There is a talent deficit in government and electoral politics in general. In 2014, the BJP won a massive 282 seats in the Lok Sabha, with around 60 per cent first time MPs. And yet, a majority of the performing ministers come from the Upper House, often elected from states outside their home base.

The demands of electoral politics are very different from those of governance: with every successive cabinet, this is becoming increasingly apparent (even the UPA took the Rajya Sabha route to draft in potential ministerial aspirants).

Specialisation and domain expertise is still not given enough emphasis - why is a seasoned diplomat like Hardeep Puri in urban development while urban affairs expert KJ Alphons Kannanthanam, is in tourism and IT?

It is good though to see Rajyavardhan Rathore in sports and youth affairs. K) The media is completely in the dark when it comes to the Modi government's decision-making. The speculation within the media on ministerial appointments was largely proven wrong: we even didn't know who the next defence minister would be till the announcement was finally made. In sync with their "supremo" style, the Modi-Shah duo like to keep everyone guessing till the end. Maybe, the media should stop all speculative pre-reshuffle programming in the future. Less hazardous and injurious to professional health.

Post-script: Now that the reshuffle is over and we got almost all our predictions wrong, can the media return to its core task of telling truth to power and focussing on "real" issues. Come tomorrow the media narrative should return to the issues that matter: growth, agrarian distress, jobs, health, education and much more. Somehow, I rather doubt it!

Watch: India at 70: Are we becoming a Hindu Rashtra?

#Modi government, #Cabinet reshuffle
The views and opinions expressed in this article are those of the authors and do not necessarily reflect the official policy or position of DailyO.in or the India Today Group. The writers are solely responsible for any claims arising out of the contents of this article.