The bold move will lay the foundation for a more united and inclusive nation.

The Centre has decided to promote the use of Hindi in routine conversation in government offices and plans to make the language more popular in the Northeast and South India.

No sooner did the news make headlines, than the army of Macalayputras was up in arms, spinning out old and tested fears of diversity in danger, majoritarian tyranny, et al.

The controversy is an opportune moment to delve into the language debate and examine the conventional wisdom of not going the whole hog in promoting Hindi.

There is a strong case to be made out for prioritising Hindi (and regional languages) over English. Let's look at why India will be better off prioritising its native language rather than the colonial import:

Hindi is easier to learn

The most frequent argument made against the use of Hindi is - it will disadvantage other regional languages.

This is a classic case of divide and rule that was first mastered by the British and is now adroitly used by the English-speaking elite, who inherited the privileges that come with exclusive command over an imposed language. 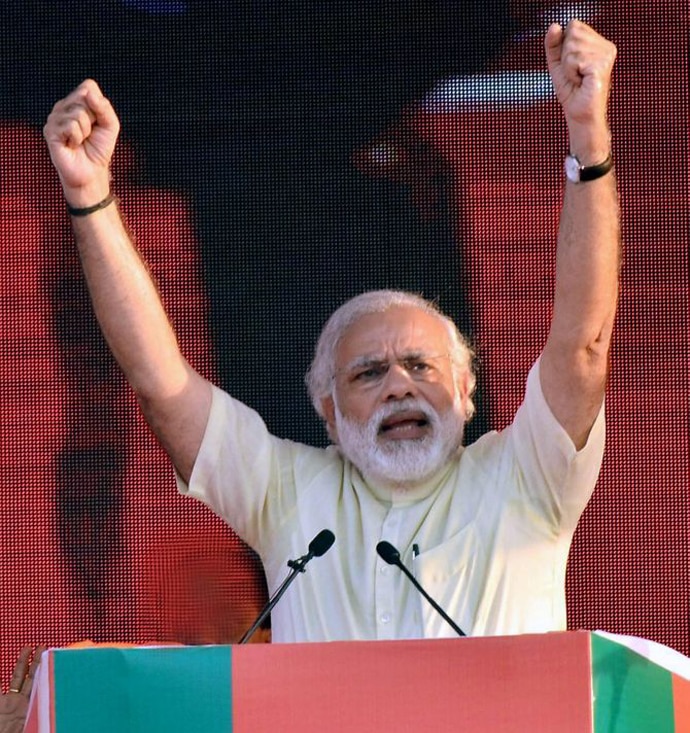 India has got a PM who is not ashamed of identifying with, or speaking, a native Indian tongue.

The argument is logically fallacious, because if non-Hindi speakers can learn to speak and write in English, why can't they learn to use Hindi?

Why is promoting English, unlike Hindi, not discrimination? For speakers of the native language who are alien to both Hindi and English, learning the former is far easier.

Due to centuries of exchange among different native languages, there is much that is common or shared.

Many follow the Devnagri script, and native languages have many words in common - their structure and rules also bear similarities.

Also, since Hindi is - by far - the most widely spoken language in India, even non-Hindi speakers often have to interact with their Hindi counterparts and that leads to still more familiarity.

So if non-Hindi speakers are learning another language, why should it not be the one they are more familiar with?

The choice, therefore, is not between Hindi and other native languages, but between the latter and the imposed English.

It serves to keep the English hegemony intact and different native languages are pitted against one another and, as a compromise, a foreign language is given preference.

By boldly promoting Hindi, the government is refusing to make the false choice and laying the foundation for a more united nation.

Innumerable studies have documented how tutoring people in their native language leads to better learning outcomes.

As our thoughts originate in our mother tongue, we are better able to grasp ideas if they are imparted in our native language.

Thus it is wiser for education to be promoted in native languages.

But sadly, in India, the craze for English and the success of the English-speaking elite to pit native speakers against one another leads to hegemony of English even in the education system.

But by embracing Hindi, we can end this discrimination against native languages. If Indians are instructed in the native language, the learning outcome will be better (as the less will be lost in translation, especially in less-privileged segments).

It will thus lead to higher productivity with a workforce that is more learned.

It will also spur innovation as many, who get distanced from educational pursuits due to the difficulties involved in understanding a foreign language like English - which is not spoken in their homes and one they have not learnt since childhood - will no longer be deterred.

A more inclusive and prosperous economy

Hindi is the native language of more than 41.03 per cent (2001 census) Indians and, by far, outstrips Bengali which comes next at 8.33 per cent.

The number of Indians who consider Hindi their native language has also been growing rapidly.

And if one where to go by how many people know the language - for whom it is not a native tongue - more than half the Indians are comfortable with using Hindi, as opposed to the less than 10 per cent who use English.

So when today, English proficiency has become a filter for doing well, we have excluded the majority of Indians from the opportunities that should be made available to every citizen.

Whether it is for pursuing an MBA or in the field of finance, our economy is seriously shaped up against those who are do not have a sound command over the English language.

This means the Indian economy is unable to benefit from its vast demography because of the language barrier we have erected.

If we adopt Hindi as the universal medium of instruction and communication, this language barrier will be dismantled and our economy can become a lot more inclusive and prosperous by providing equal opportunities of advancement to those who have, so far, been unable to contribute their best to the nation's welfare and growth.

What about the fabled benefit of knowing English as an international language? Well, it is an overrated skill: among the world's top 10 economies, none except India have traded their language for growth and have still fared well.

In fact, both Japan and China whose rise from poverty to prosperity is stuff of legends, dominantly conduct business in Japanese and Mandarin. If they could be successful, surely India too can.

An elite more connected to the masses

A more subtle benefit of prioritising Hindi will be that it will end the disconnect between our elite and masses. Today, English has become a language that we use to differentiate between the elite and the subaltern.

Speaking English is seen as a status symbol. For instance, at any high society party, it's a matter of shame to acknowledge that one is not fluent in English, while not knowing Hindi or any other native language is par for the course.

This language divide creates an elite that is more distanced from the masses and insensitive to their concerns.

A large number of people feel humiliated in their own country, suffer a crisis of confidence and experience a feeling of inferiority due to this system of domination.

Such a state of affairs can never create a nation that is confident of its values, and unafraid of being the first-rate version of what it truly is, rather than being a second-rate copy of another state.

Thus, for more than one reason, India needs to ensure the primacy of Hindi and native languages, not English.

But the fears of a vocal minority and slavish mentality have held such a change to ransom. However, in Prime Minister Narendra Modi, after a very long while, India has got a PM who is not ashamed of identifying with, or speaking, a native Indian tongue.

Here is a PM who gives almost all his speeches in Hindi, one who is not afraid to be Indian.One hopes the statement of the minister is the beginning of institutionalising the revival of Indian languages and restoring them to their primacy.

#Education, #Hindi, #Modi government
The views and opinions expressed in this article are those of the authors and do not necessarily reflect the official policy or position of DailyO.in or the India Today Group. The writers are solely responsible for any claims arising out of the contents of this article.