Global trends are evolving rapidly and major powers must redefine ties with each other to match contemporary requirements.

Prime Minister Narendra Modi is in Vladivostok, Russia on a two-day visit to participate in the 20th India-Russia annual summit and the fifth meeting of the Eastern Economic Forum (EEF). The first Indian Prime Minister to visit the Russian Far East Region, Modi’s visit is intended to give “a new direction, new energy and new speed” to relations between the two countries. 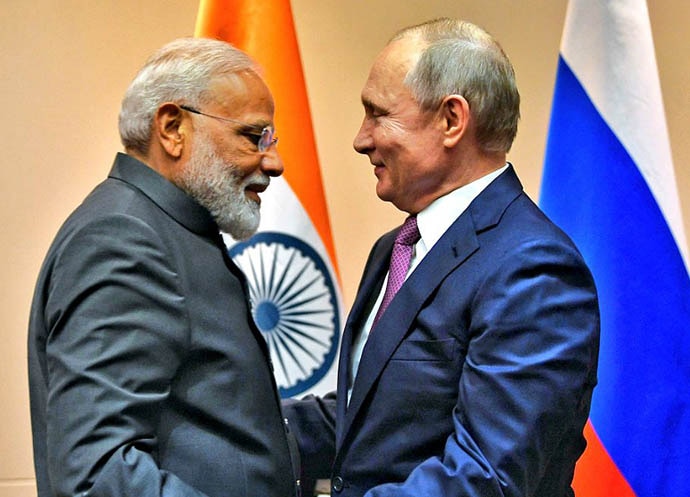 Narendra Modi’s visit is expected to provide a fresh impetus to relations between Russia and India. (Photo: Twitter/@MEAIndia)

Since 2015, EEF has been trying to push for the development of business and investment opportunities in the Russian Far East Region and Modi’s presence there as chief guest underscores the role this region can play in enhancing cooperation between India and Russia in the region and beyond. The summit-level meeting between Modi and Russian President Vladimir Putin saw the two nations signing 25 pacts in areas ranging from connectivity, oil and gas, deep-sea exploration, to space and energy.

Modi’s presence at the EEF is important at various levels. Russia’s Far East is a huge land mass which is rich in resources but is sparsely populated and underdeveloped. With the centre of gravity of global economics shifting to Asia, Putin is keen on focusing on the Far East and develop it with the help of Asian powers. So far, Chinese dominance in the Russian Far East has been palpable, much to the discomfort of Moscow. In this context, Putin’s attempt to diversify assumes importance, so as to lessen Russia’s growing dependence on China. Indian investors will also find much of value as they look at Russian Far East and explore investment opportunities there.

In August, Commerce and Industry minister Piyush Goyal led a delegation to Vladivostok that included the chief ministers of Goa, Gujarat, Haryana, Maharashtra and Uttar Pradesh, and an official from the state of Assam. Representatives from about 140 companies accompanied them.

India’s economic ties with Russia have been struggling with bilateral trade hovering around the $10 billion mark. Energy is one area which has the potential to provide ballast to their ties. After having invested around $10 billion in acquiring stakes in hydrocarbon assets in Russia, Indian energy companies are keen to invest in Russia’s upstream sector. A consortium of Indian oil companies is reportedly making a play for a significant stake in the eastern cluster oil fields in Russia.

Russia’s Rosneft in 2017 completed a $12.9-billion acquisition of Essar Oil to enter India, the world’s fastest-growing energy market. Russia and India are also becoming more ambitious by pursuing projects in other countries such as the Rooppur nuclear power project in Bangladesh.

Defence ties, of course, remain the cornerstone of the India-Russia bilateral engagement. New Delhi’s decision to go ahead with the purchase of S-400 missile defence system, worth over $5 billion, despite the threat of US sanctions, underscores the importance India continues to attach to its defence engagement with Russia. PM Modi wants India and Russia to take advantage of the low production cost in India to produce military equipment under joint venture framework at cheaper rates for third-world nations. This will have to be the future of India-Russia defence engagement for them to become sustainable. There are also reports of a possible military logistics support agreement, the Agreement on Reciprocal Logistics Support (ARLS), aimed at facilitating access to each others’ military facilities.

Despite concerns in India about growing closeness between Russia and Pakistan, Moscow stood by India on the issue of Jammu and Kashmir, arguing that “India’s decision [on Jammu and Kashmir] is a sovereign decision which is as per its Constitution” and that “Moscow follows a policy of non-interference in domestic affairs of countries.” After initially ignoring India, Russia also made a course correction on Afghanistan, recognising that India’s involvement in Afghanistan remains necessary if the war-torn nation is to see long-term stability. 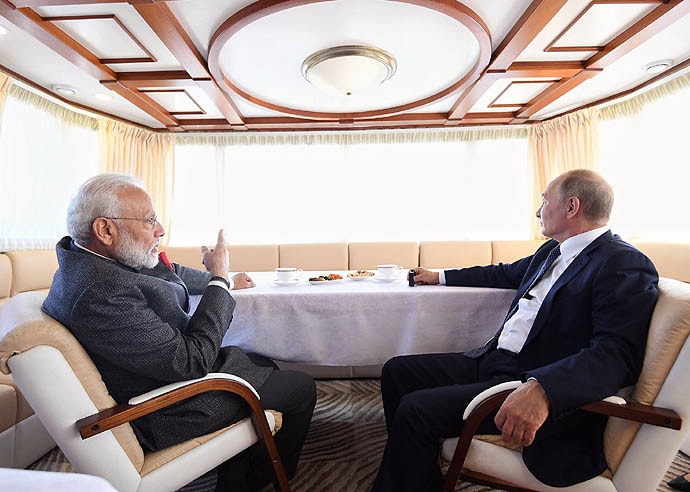 Moscow has supported India on both Jammu and Kashmir and involvement in rebuilding Afghanistan. (Photo: Twitter/@MEAIndia)

The challenge in front of India and Russia is that they need to transform a 20th-century partnership and make it fit for the 21st century. Global trends are evolving rapidly and major powers are redefining their ties with each other to match their contemporary requirements.

New Delhi and Moscow cannot be fixated on the past and can’t expect exclusionary bilateral ties from each other. The good news is that the top leadership has recognised the challenge and is ready to take corrective measures. The challenge is that this can’t be a one-off measure.

It will have to be a continuous engagement to sustain the momentum created by regular outreach between the top leaders. Modi is right when he argues that the greatest achievement of the last 20 years in India-Russia ties is “trust”. Both nations should build on this trust to carve out a modern, broad-based partnership more in sync with contemporary realities.

#India-Russia relations, #Vladimir Putin, #Eastern economic forum, #Modi in Russia
The views and opinions expressed in this article are those of the authors and do not necessarily reflect the official policy or position of DailyO.in or the India Today Group. The writers are solely responsible for any claims arising out of the contents of this article.