Modi in the US: A performer without pants

There is a huge amount of churning on the surface, but nothing much has changed underneath.

For both Modi's ardent supporters and his equally ardent critics, his recent US visit will support their theories. For the supporters, the packed house at the joint sitting of the US Congress will be symbolic of his success.

For the critics, the fact that the US media has largely ignored the visit, and that he receives nothing like the deferential treatment given to Nehru - or even the star-like treatment given to Rajiv Gandhi - is evidence of his failure.

Also read - Why the Western media will never like Narendra Modi

In point of fact, both of these are relevant, but not hugely important. The key measures of success and failure have to do with security policy and economics.

These are the areas that matter to both US and Indian publics. Little has happened here, and Modi's visit illustrated exactly why we should have low expectations that there will be any fundamental change.

It is said about the swan that while it seems to glide gracefully on the surface of the water, a huge amount of churning is happening underneath. This is often the same description used for diplomacy.

Modi's diplomacy vis-à-vis the US seems to turn this axiom on its head. There is a huge amount of churning on the surface, but nothing much has changed underneath.

Maybe the best illustration of this is the packed audience at the Congress. This is an actual achievement. A senior analyst at one of the most important institutions that covers South Asia for the government told me that he was not even offered a place due to the demand from politicians.

Modi and his machine in the US have learned how to use the political system to influence local politicians. This practise began under Vajpayee's government and has been turbocharged by this one. 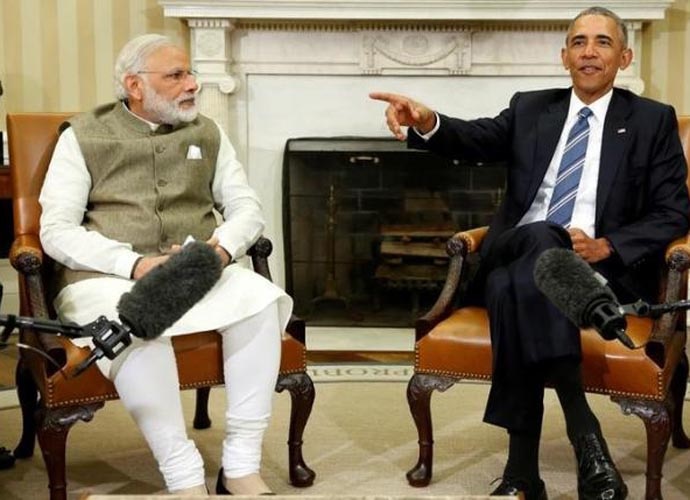 Modi demonstrated that he was begging for US help in our own neighbourhood. (Reuters)

Under pressure by local Indian American lobbies, US politicians are happy to parade in large numbers under Modi's banner.

The key question is what is this worth? The US is going through a major election cycle - one of the most contentious in recent history.

Hillary Clinton has now been confirmed as the nominee of the Democratic Party, as Donald Trump had been earlier. Both candidates ignored Modi's visit.

Also read - Modi's US visit was a personal victory, but India's loss

Unlike the UK, where the Conservative Party tried to use their closeness to Modi to influence London's elections - a move that failed spectacularly - to the major US political parties, Modi - and India - remain insignificant in their calculations for electoral victory.

US lawmakers remain unimpressed by the Indian government on issues ranging from trade to human rights. Neither a serious power - such as China - or a close ally embedded in local culture - such as Israel - would be treated in this manner. This is basically because India does not matter on key issues of security and economics.

Begging for security in Afghanistan and Pakistan

This was most clearly brought out by Modi's pathetic complaints about Pakistan, and his obsequious thanks extended to the US for their efforts in Afghanistan. Modi visited Arlington cemetery to lay a wreath on the graves of US soldiers killed in action in Afghanistan, but his US hosts know that India has not, and will not, deploy troops to do anything in the same country.

As one senior European diplomat said to me, "Indians love to complain to us about how we have not been able to manage Afghanistan, but tell me, what is your success rate?"

The only aspects of Indian diplomacy that have worked, are those conducted under the security umbrella of the US and its allies, and that impresses nobody.

As one US commentator put it, there are still far more Pakistanis helping the US fight its wars (even if they may also be helping its enemies) than there have ever been Indians after World War II. We speak well, though, but big talk never won any wars.

Also read - Why Modi is pushing India closer to US

This was highlighted by Modi's complaints against Pakistan - about how terror is incubated in our neighbourhood. As true as this may be, it shows India's lack of leadership capability in our own region.

Instead of showing the way ahead, of being able to tackle the problem that Pakistan's militancy problem has created for everyone, India is begging for help against a country one-eighth our size, and with which we should be able to deal with.

When Modi said, "A strong India-US partnership can anchor peace, prosperity and stability from Asia to Africa and from the Indian Ocean to the Pacific," his hosts must have laughed - as it seems they are doing in the picture accompanying this article on the subject.

The track record of this government in promoting any stability in its neighbourhood, from Nepal to Pakistan, is abysmal. Modi demonstrated that he was begging for US help in our own neighbourhood, one that we cannot manage on our own.

An economy in crisis

Much of this can be glossed over. American businesses will forgive much - maybe everything - for a profit. But where is the profit to be had in India?

In a recent press release the Reserve Bank of India observed that, "Exports declined for the seventeenth consecutive month in April in US dollar terms in spite of a modest increase in volume… Exports of engineering goods declined for the ninth straight month while readymade garments recorded a fall for the fourth successive month. Imports fell sharply and across constituents - 25 items accounting for a share of 87 per cent in total imports recorded a decline".

How do you think that business is doing when exports and imports continue to fall - not to mention drought conditions affecting 330 million Indians? When plutocrats that benefit from being close to the government such as Gautam Adani and Mukesh Ambani have suffered losses during the term of this government, which US business - who have nothing like that access - is going to be gung-ho about the Indian market?

A very telling indication of this was a conversation I had with Richard Russow, at the Center for Strategic and International Studies, one of the most powerful think tanks in the US.

As part of his work, Rick closely monitors the state of Indian reforms, including comparing reforms in individual states. When I asked him which sectors of US business were his main clients, he told me that the main traffic for this kind of information came from Indian business!

Basically Indian businesses wanted to know where to invest, and could find no better source to figure out how various states were working. For most US businesses India is still not doing enough to be interesting. Modi's government came in talking about "Big Bang" reforms, and now he says he does not even know what those are.

The reality of Indian power

The hard truth is that India is still a relatively small military power, and although its economy is large by sheer size, it will take a long time before it becomes a country where the ease of doing business is possible.

Those disappointed by the careful small steps of the last government expected Modi, who made tall claims, to miraculously change these things around. Since the ground realities have not changed, he has inevitably failed.

At least he is a good salesman, though, and can garner a few good photographs and a little applause. It remains to be seen if the Indian public will be satisfied with that.

Post your comment
#Indian Economy, #Narendra Modi, #Modi in US
The views and opinions expressed in this article are those of the authors and do not necessarily reflect the official policy or position of DailyO.in or the India Today Group. The writers are solely responsible for any claims arising out of the contents of this article.