Why Modi sarkar is not serious about Paris Climate Change goals

The years of negotiation leading up to the Paris agreement on climate change have spawned a whole new jargon of its own. In the days during and following the consensus reached on December 12, some of the catchphrases are spilling over into the public domain. Thus we had Prime Minister Modi tweeting that "climate justice" has won. Minister for environment, forests and climate change (MoEF&CC), Prakash Javadekar complained that actions of developed countries are far below their "historical responsibilities". 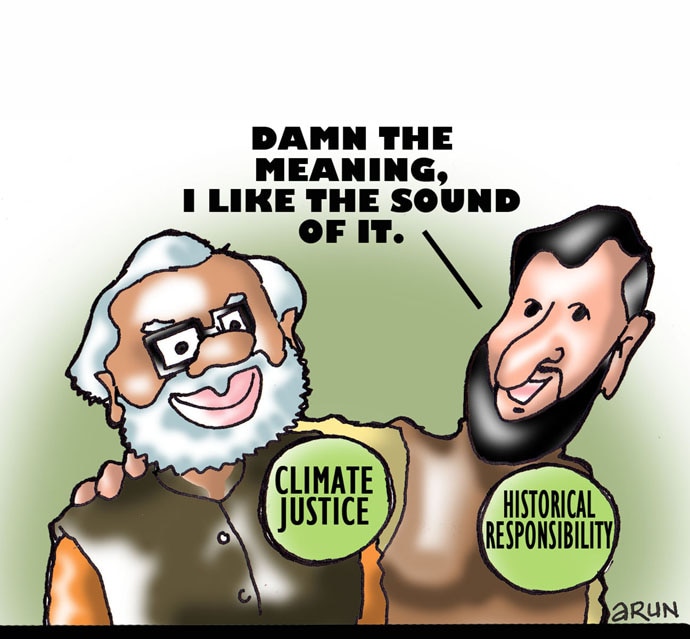 It is interesting to see Modi and Javadekar talk of justice and responsibility with respect to the environment. Thus far they have shown scant concern for either. Soon after coming to power they have done all they can to clear the tracks for rampant exploitation of the environment by corporate India.

Dilution of pollution norms, removal of restrictions on projects near national parks, clearance for mining projects without public hearings, disempowerment of gram sabhas by removing provisions for their consent for industrial projects in forest areas were some among a slew of measures that amount to a veritable war on the environment. A simultaneous intensification of the war on the Maoist movement was announced by the home ministry. Apart from the political imperative, the declaration was to demonstrate a resolve to rid the forests of central and eastern India of the Naxalites, who are seen by India Inc as the prime obstacle to their plans to evict the local tribal population, clear the forests and exploit the vast mineral resources lying there.

Thus duplicity has long dominated the government's climate change discourse. Javadekar talked tough and sanctimonious on the moral principle of equity and of the historic responsibility of those countries which have historically emitted the most, at the UN Climate Change Summit at New York in September 2014. This was the same month when he was plotting the amendment to the Forest Rights Act to deny the same equity to his country's forest-dwellers by removing their right of consent to projects entering their areas. He also declared then at the UN that India was serious about acting on climate change and would act on its own volition. But, given the government's policy measures, the hollowness of this claim seemed as apparent as the hypocrisy in the rhetoric.

Climate change control/reversal is not only about limiting carbon emissions through so-called clean technologies, but also about preserving and expanding the forests which are the lungs of the earth. It has been estimated that around 90 per cent of CO2 emissions are caused by land-use change or deforestation. Forests are recognised as "carbon sinks" that absorb CO2 from the atmosphere and store carbon in wood, leaves, litter, roots, and soil and thus act to moderate the climate. Thus the extension and deepening of forests is essential to any programme of controlling climate change.

The government, however, has shown no real inclination of moving in that direction. An earlier environment ministry document, which dealt with the subject of forests as carbon sinks, seemed more interested in their valuation in monetary terms equivalent to "carbon credits". The trouble with such an approach of linking India's forests with the global carbon trade is that it leads to government reports being more interested in presenting a rosy and wrong picture of expanding area under tree cover, without bothering about its real impact on absorption of carbon dioxide from the atmosphere.

Javadekar is leading from the front in this window-dressing. He, in July 2015, issued an intra-ministry circular, directing ministry officials to replace the word "diversion" of forest land with "reforestation" in all communications. An earlier CAG audit found compensatory afforestation on non-forest land to be only about seven per cent of the forest land taken over by projects. Further, as has been pointed out, even where "compensatory afforestation" actually takes place, it is normally in the form of plantations, which do not really compensate for natural forests that are "diverted".

But the environment minister insists on covering up this reality. The same is with the Forest Survey of India's 2015 figures for forest cover, which show an increase which is essentially a statistical creation due to changed definitions and satellite imagery techniques that bring even small one hectare patches with ten per cent canopy being counted as forests. The figures are so absurd as to show Delhi having increased its forest cover almost 13-fold from 15sqkm to 189sqkm over the last 30 years. But Javdekar could not care less. He was quick to assert that increased tree cover has deepened India's carbon sink and that the figures would prove useful to negotiators at Paris to showcase India's "commitment" to arresting climate change.

Since Javadekar was quite likely not the only figure-fudger at Paris, it would perhaps be unfair to single him out. It would be only an indicator that the actual implementation of the Paris Agreement would fall far short of the targets set.

Meanwhile business continues as usual post-Paris. It has recently been reported that the MoEF&CC has recommended forest clearance for the expansion of the country's largest open cast mine in Singrauli, in an area of "very dense forest" that had earlier been classified as inviolate or out of bound for mining. The Centre is also considering a home ministry proposal seeking an eight-fold rise in forest clearance cap for projects in 117 Left-wing extremism hit districts, which also happen to be densely forested. This is in continuation of earlier decisions since 2011 to relax norms first in 60 districts and then in 57 more districts. Though environment ministry officials have raised initial objections, the trend so far indicates that the likelihood of the proposal being cleared is pretty high.

Such clearances and policy changes have, however, not always resulted in the clearing of forests to make way for projects. In many cases the struggles of the local tribal communities under the leadership of the Maoists has ensured that deforestation does not take place. One such struggle is building up in the Eastern Ghats, where the tribals have vowed to oppose the Andhra Pradesh government's plan to deforest the hills for bauxite mining. The zonal committee of the CPI(Maoist) in the area has extended its support to the locals. In the face of such opposition, the AP government will possibly be forced to retreat and the bauxite may yet stay in the mountains. It is popular resistance such as this that will probably provide greater promise for the protection of the environment and forests.

#Narendra Modi, #Prakash Javadekar, #Climate change, #Environment
The views and opinions expressed in this article are those of the authors and do not necessarily reflect the official policy or position of DailyO.in or the India Today Group. The writers are solely responsible for any claims arising out of the contents of this article.