But the deafening silence in mainstream media over the BJYM IT coordinator’s involvement in recently busted MP espionage ring is simply unbelievable.

Five days have passed since an alarmingly disturbing story broke in the Indian mediasphere. Dainik Bhaskar Post (DB Post), published from Bhopal, front-paged on Friday, February 10, the busting by the Madhya Pradesh Anti-Terrorist Squad (ATS) of an alleged spy ring selling state secrets and sensitive details about Indian Army deployments to the dreaded Pakistani Inter-Services Intelligence agency, or the ISI.

According to DB Post, and other follow-ups that were posted in online portals of some of the media outlets, 11 persons, “all Hindus”, including a Bharatiya Janata Yuva Morcha (BJYM) – the BJP youth wing – member and its district IT cell coordinator based in Bhopal, Dhruv Saxena, were arrested by MP ATS in this connection.

“This may be the tip of the iceberg, but as of now, ATS has nabbed 11 people, all Hindus, from four districts of the state, namely Bhopal, Gwalior, Jabalpur and Satna. All these men had been clandestinely operating various mediums to send classified information out to their Pakistani handlers. The ATS conducted the operations on a tip-off received from the central intelligence agencies and the Jammu and Kashmir Police.

While three of the detainees were working as handlers for ISI agents working in India, eight were running parallel telecom exchanges, facilitating the ISI spies to call up military personnel posted in J&K, impersonating senior Army officers. They fished out details about possible operations, deployment of force and relayed photographic records of Army bridges in the region. The parallel telecom exchanges were being run in Bhopal and Gwalior.”

Naturally, the charges are extremely grave and under usual circumstances (read with names of suspects that sounded generic Muslim) one would expect Indian media, particularly the boisterous TV channels that practically live-telecast the JNU agitation, to justifiably outrage, question, send reporters to Bhopal en masse, try and dig deeper, unearth the nasty espionage ring that compromised India’s national security and sold its soul to Pakistan, for a few extra bucks.

One of the 11 arrested in Madhya Pradesh for spying on Indian army was rather close to top state BJP leaders. @dbpostnews pic.twitter.com/5e2loMdTvq

Instead, we have pin-drop silence.

The reasons are obvious as to why there are no shrill TV debates on this and why Major Gen Bakshi isn't sobbing copiously over it! https://t.co/92aSxHIqRV

This is "Nationalist" Spying against Indian Army on behalf of ISI. Includes connection to BJP. pic.twitter.com/LFqfPv6GZm

We have pin-drop silence from the TV channels that decided to brand JNU “anti-national” merely on the account of its students holding a talk on Afzal Guru on his death anniversary. We have pin-drop silence from the channels that ensured 24X7 coverage of the JNU agitation exactly a year back, that saw the arrest of the JNUSU president Kanhaiya Kumar.

We have pin-drop silence from media outlets and Twitter superstars who claimed that the staunchly Marxist and atheist JNU PhD student Umar Khalid had made over “850 calls to the Gulf countries”, and had to be an aspiring jihadi. We have pin-drop silence from newsanchors who claimed Hafiz Saeed was sponsoring the JNU agitation. The month-long obsession with JNU and turning it into a media epicentre continued despite the whole thing being triggered by a “doctored video” of “anti-nationals” chanting “anti-India slogans”, as it was soon discovered.

Absolutely amazing and eye-opening this silence is, when the keywords that usually make those in the BJP/RSS quarters, and in the nationalist media in the country, sit up and scream their patriotic lungs out – ISI, Pakistan, espionage, national security, state secrets – are ALL not just present, but ominously informing each and every aspect of this case. 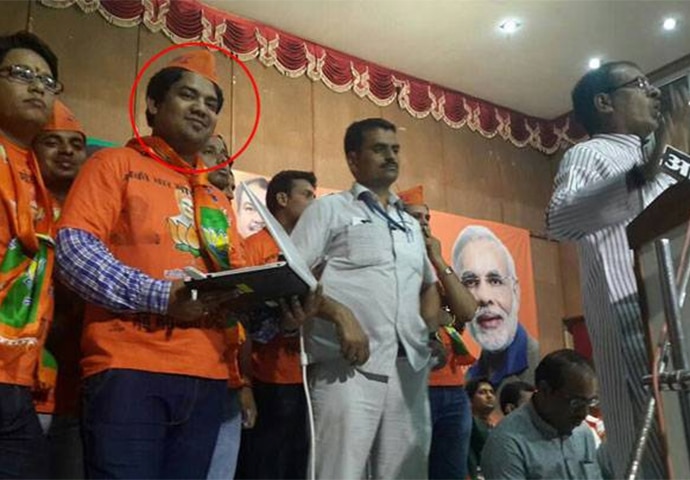 Why has been Dhruv’s name being struck off from the BJYM’s Bhopal website, when its Google cache clearly shows him as the district IT cell coordinator? [Photo: Indiatoday.in]

So, why this deathly silence now over something that needs immediate national and international attention? Why a cyber-espionage cell operating in a BJP-ruled state, involving personnel who have their social media sites flooded with photos featuring BJP leaders, including the Madhya Pradesh chief minister Shivraj Singh Chouhan, and the party general secretary Kailash Vijayvargiya, evokes no interest at all from politicians and journalists who fall back on national security to silence critics at every step, who brand human rights activists as anti-nationals who must be sent to Pakistan, who hide behind the Indian soldier every time there is an election around the corner?

Never mind if Dhruv had pics with the CM or BJP National Gen Secy. Anyone can have pictures with anyone, they said 5/n pic.twitter.com/pcGoPMwI4u

Pic from his FB account showed him as a BJYM District IT coordinator, wishing the BJYM president on his B'day. 6/n pic.twitter.com/jTy8lTWVWN

Why indeed, we must ask.

Tiny portals are unearthing details and asking questions that should have been ideally asked in glitzy newsrooms of the national capital that set the national agenda.

A) Why is it that Dhruv Saxena, who belonged to BJYM, the BJP’s youth wing, and was the district coordinator of the BJYM’s Bhopal IT cell, is now being disowned by the state BJP president Nandkumar Singh Chauhan and the BJYM chief Anshul Tiwari?

B) Why has been Dhruv’s name struck off from the BJYM’s Bhopal website, when its Google cache clearly shows him as the district IT cell coordinator?

.@altnews_in did a brilliant job of retrieving the page frm Google cache & lo and behold, it showed Dhruv as the District IT Coordinator 9/n pic.twitter.com/LjyXz0Fbta

C) Why, in the age of PM Narendra Modi-driven demonetisation and a cashless push from the topmost elected leader of the country, is a cyber spy ring – that has committed alleged cyber fraud involving “parallel telecom exchanges”, “activated SIM cards with no legal paperwork”, “impersonations of Indian Army officers” on mobile calls to extract Army deployment in sensitive states like Jammu and Kashmir and passing them on to their “ISI handlers”, three among those detained, as well as other crimes that directly threaten national security – of no interest to the TV and print media published/broadcast from Delhi and NCR?

MP district coordinator for BJP IT cell Dhruv Saxena nabbed by the ATS for being an ISI agent. Why are the patriotic journalists silent ?

D) Why, when the Madhya Pradesh ATS chief, Sanjeev Shami, has said that a case under various sections of the Indian Telegraph Act, and also Sections 122 and 123 of the Indian Penal Code, which deal with collecting arms, information for waging war against the country, has been lodged against the 11 accused, is there practically zero interest in the national media about this extremely unsettling case of national insecurity?

It is imperative that we ask why at this juncture are these questions not being asked by the usual suspects whose bread and butter is harping on national security and instilling the climate of fear among ordinary citizens of the country.

BJP has a history of disowning its members/volunteers when embarrassed, so here is another one. 1/n pic.twitter.com/cPYLHAyodA

Is it because the BJP/RSS and the Sangh Parivar-facilitated, Hindutva-milking commentariat have a long and illustrious history of dubious disavowals and disowning of persons, events, instances that do not fit the hypernationalist script?

2 yrs ago, they disowned AmiteshSingh of their Pune unit after he was arrested for his hate tweet. 2/n pic.twitter.com/lm7WcM6sNI

Is it because the BJP/RSS habitually disown any person or affiliated organisation that has gone awry, or deviated slightly from the narrative of Hindu piety, or has exposed the BJP IT cell as a conglomerate of rabid trolls threatening journalists, women, Bollywood stars, opposition leaders, seculars and liberals and operating on orders from the very top?

So it came as no surprise that BJP also disowned Dhruv Saxena, arrested in MP for providing crucial info abt army deployments to ISI 4/n pic.twitter.com/cHETBWwd1b

Is it because the idea of a Hindu, BJP-affiliated, nationalist being caught with his patriotic pants down, ferrying out state secrets to the common enemy-in-chief Pakistan – the nationalist bogeyman and one-stop answer to every problem in the country, the raison d'être of the staggering national security apparatus that looks increasingly rudderless and exploited by the mercenaries – is exactly what destroys the Sangh Parivar’s claim to a prioi patriotism?

Patriotism by default of those born Hindu and espousing Hindutva was in fact blown to smithereens a long time ago when the RSS decided to side with the British Empire and not the freedom fighters who were demanding complete independence. It was once again proven to be a hoax when the RSS disowned Nathuram Godse, who killed Gandhi blaming him for Partition and dividing a “civilisationally Hindu” India.

70 years on, as Godse is being revived as a Hindutva icon – let’s admit it, he was never really deserted – and as nationalism becomes a shouting match for those in TV studios and party headquarters taking orders from Nagpur, we have one more scathing exposé, as it were, of the hypocrisies around these grand narratives.

As “murmurs of feared infiltration” within the BJP camp get a passing mention in a news portal, exactly as the 11 detainees, particularly the BJYM member now disowned by the party, are seen more as aberrations than the norm, (the norm being that those conspiring to sell state secrets to Pakistan must have a Muslim, or at least a non-Hindu name), we realise the gravity of the case which we simply want to unsee, wish it disappeared.

Just three months from the dreaded Bhopal “fake encounter”, in which eight SIMI activists were gunned down in broad daylight after a controversial jailbreak on Diwali night last year, we have the Shivraj Singh Chouhan-ruled Madhya Pradesh in a soup almost as big as the last one. The Bhopal “smartphone encounter” is still shrouded in mystery, pointing to the likelihood of the Chouhan government not allowing a proper investigation into the cold-blooded shooting to death of the eight inmates.

Now, the emergence of a massive spy ring within just three months, which reports quoting sources in the MP ATS say is only the “tip of the iceberg”, is reason enough for the BJP government in Madhya Pradesh to do some soul-searching, and take the right steps, instead of brushing this under the thick carpet of politically convenient amnesia, as it did in the case of the murderous Vyapam scam.

As for those in the media who have opted for selective silence over this issue, not even giving it a ticker on their 24X7 television channels, how exactly have you served journalism with your extreme cowardice?

#Spy, #ISI, #Dhruv Saxena, #ISI spy ring
The views and opinions expressed in this article are those of the authors and do not necessarily reflect the official policy or position of DailyO.in or the India Today Group. The writers are solely responsible for any claims arising out of the contents of this article.