Netaji miffed with Betaji again: Why Mulayam is so hard on Akhilesh Yadav

The 2017 Assembly polls amply demonstrated that the SP family feud is hurting the party. Mulayam needs to learn a trick from the Shiv Sena.

The Samajwadi Party patriarch, despite his downy name, has been remarkably tough with his son and party chief, poor Akhilesh Yadav.

On the day the SP and BSP announced their seat-sharing pact for the Lok Sabha elections 2019, Mulayam came down hard on Akhilesh, saying the party was being ‘ruined’.

“Who is destroying the party? Its very own people. It was such a strong party. We had formed the government thrice and I was the chief minister for three terms. I was even the defence minister once. I don’t want to bring politics into this but I am saying the right thing,” Mulayam Singh Yadav told party workers in Uttar Pradesh on February 21.

The SP family drama is one which Ekta Kapoor would be proud of. But every good story ought to end. This one’s moral has already been learnt — the SP’s decisive defeat in the 2017 UP Assembly polls should have been lesson enough — but the story is still going on.

Surely Mulayam Singh Yadav — an experienced, successful politician — knows the family feud is hurting the party? Why is he then refusing to resolve his differences with his son, or at least not airing them in public?

There can be several reasons for this, but the simplest one is: Discordant notes sound louder.

Mulayam, almost 80 years old, has two choices before him: To go gently into that good light, or rage against the dying of the light.

Mulayam has chosen to rage — at his son.

A Mulayam saying sweet things about his heir would get a few indulgent side news columns at best. A Mulayam berating his son instantly grabs headlines — and establishes him not as a has-been from twilight past, but as one refusing-to-just-be in the heat and dust of today. Mulayam magnanimously passed the baton to his son in 2012 — but has been missing it ever since. (Photo: PTI/file)

In fact, this is the staying-relevant formula that the Shiv Sena has made a career out of. Had the Sena not constantly criticised the BJP, people would have forgotten it exists. Now, as the two predictably join hands again before the polls, voters at least remember there are two shades of saffron in that alliance.

However, friendly fire is different from family fights.

What the Sena does — kabhi friend, kabhi foe — helps it stay electorally relevant. But Mulayam’s quest for maintaining his individual relevance can cost his party dearly.

In 2017, Netaji had gone beyond just criticising — he had actually stopped campaigning for the SP.

The party suffered a crushing defeat in the Assembly polls. This, ironically, pushed Akhilesh to the point where he has been forced to tie up with Mayawati’s BSP on her terms — something Mulayam is now so incensed with.

Has the SP patriarch forgotten that he had forged a similar alliance with the same party in 1993, which helped him become chief minister for the second time? Or that he became CM the first time with outside support from the BJP? 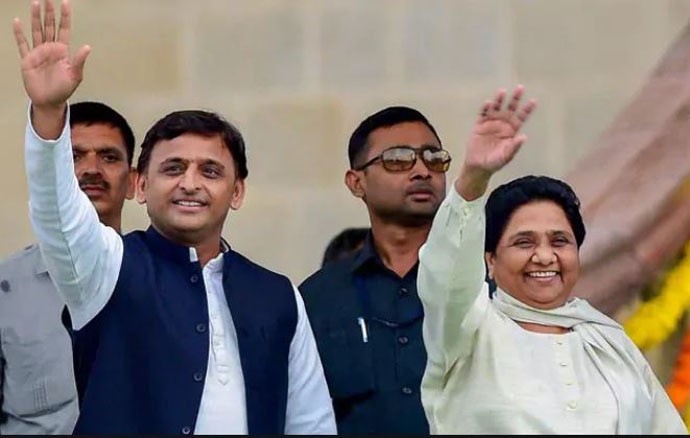 One of the reasons Akhilesh has had to lean so heavily on Bua Mayawati is the lack of support from his dad. (Photo: PTI/file)

Surely, joining hands with another party will not hurt the SP as much as a falling out within the party?

Netaji needs to remember that the future is now Betaji.

And till their relations are so rocky, even his political future can’t rest on solid grounds.