Do we the need high-speed railway, or should we first modernise the existing network?

In his first speech to mark the inauguration of the construction of the Ahmedabad-Mumbai bullet train, Union railway minister Piyush Goyal raised a valid point: in the late '60s, many had criticised the introduction of the high-speed Rajdhani trains, but today ordinary citizens prefer to travel by them.

Prime Minister Narendra Modi and his Japanese counterpart Shinzo Abe have managed a groundbreaking feat with the ambitious bullet train project. Today, to cover the roughly 500km-travel between these two cities, commuters spend more than 7 hours 30 minutes, but the Ahmedabad-Mumbai high-speed railway (HSR) train is expected to bring down the travel time to less than two hours.

The HSR design speed for the inter-state track is 350kmph - with the maximum operational speed of 320kmph and average speed of 260kmph. Along with this track, India is working out the feasibility of taking the HSR network to arterial cities - connecting Delhi to Amritsar via Chandigarh; Delhi to Kolkata via Agra, Kanpur, Lucknow, Varanasi and Patna; Hyderabad-Chennai via Vijayawada, and Chennai to Trivandrum via Cochin and Bangalore.

These projects have been approved by the PMO.

The original idea that the PMO had asked the Suresh Prabhu-led railway ministry to work on was to develop a diamond quadrilateral connecting Delhi-Kolkata-Chennai and Mumbai, which would on the way connect all the other big cities in the country.

Goyal's remark might have been aimed at silencing the critics of the HSR network and those who are questioning the viability and utility of HSR trains, trying to highlight the conventionally poor infrastructure of the Indian Railways.

But the railway minister also intended to convey that not only is he serious about the execution, but also keen on speeding things up. Goyal, in an internal meeting with railway officers, advanced the deadline for the completion of the HSR projects by a year - he wants to see the trains running by 2022 instead of 2023.

While Japan started the HSR network five decades ago in 1964, in the past 15 years alone China has become the country with the largest HSR network spanning 22,000km, connecting 29 of its 33 provincial-level divisions. India has been discussing the viability of the network since 1973.

Serious thought was given to the project during the regime of former prime minister Rajiv Gandhi when then railway minister Madhavrao Scindia pushed the HSR. But an internal study found out that the Indians might not be able to afford the high fares; consequently, instead of HSR, semi-high speed Shatabdi trains that run at around 110-120kmph were introduced.

25 years since liberalisation, today, the Indian middle class is strong enough to make this network viable. 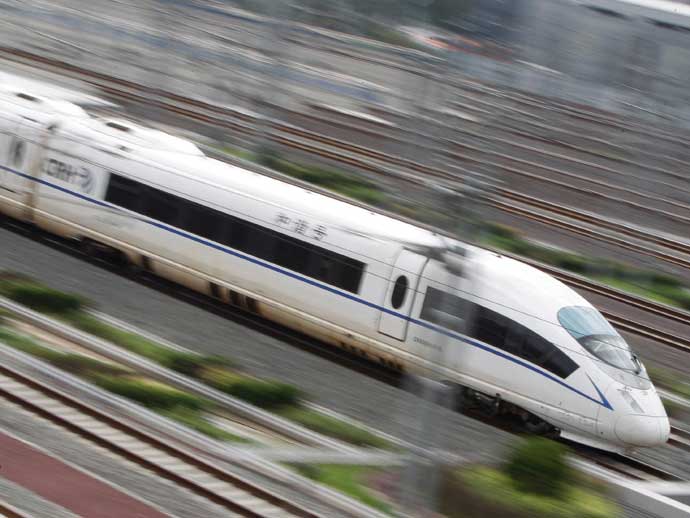 The ambitious HSR has been kept out of most of the challenges that Indian railways grapples with. Photo: Reuters

Now that India has decided to progress to the HSR network, learning from the likes of China and Japan as well as their counterparts in Europe is vital. But what would worry Goyal is, India will now be moving in two types of gauges - the HSR tracks using the standard gauge whereas the conventional tracks using the India gauge.

This means there will be no interoperability between the upgraded tracks for semi-high speed tracks (and freight) and the new HSR. But India can live with this; the entire Europe has similar dual networks. But this means India must improve the infrastructure for the conventional train network to strike a balance.

But should we choose between the HSR and the conventional network? Do we the need HSR, or should we first modernise the existing network?

Should the focus be to make travel safer? The answer is very complex, but what is clear is India needs the HSR network as much as it needs to make the conventional rail network safer for travel.

He also focused massively on decongestion of rail networks and the implementation of dedicated freight corridors, modernising railway infrastructure and gaining from private investments. Above all, he was attempting to restructure the railway board.

In such a milieu, the ambitious HSR has been kept out of most of the challenges that Indian railways grapples with.

It is largely financed by the JBIC, with cheaper debt in the long term.

Putting the railways back on track

Post the foundation of the HSR project, the task at hand for railway minister Piyush Goyal is to ramp things up.

This includes cracking the deal on EMU manufacturing unit at Kanchrapara in West Bengal, scaling up the manufacturing of modern coaches and intensifying the restructuring of the board, eventually leading to a robust railways network.

The number of accidents and derailments might have triggered Prabhu's exit from the railways, but they are just symptoms of the epidemic the mammoth network is reeling under.

In his 34-month tenure, Prabhu attempted to address problems such as inefficient decision-making and execution, financial constraints, poor infrastructure, and the inability of railways to move from the status quo.

But for his successor, the time to deliver results is short, with the general elections due in the summer of 2019.

To achieve this, Goyal needs to pick up speed - and the skills to scale up reforms. As Union minister for power, renewable resources and coal, he used this mantra of speed, skill and scale to revive the key sectors - power and coal were marred by scams and allegations of crony capitalism, while renewable resources was facing issues of indecision.

But the railways challenge is the biggest test of his mantle, skills and ability. One hopes Goyal will succeed.

Also read: Apple selling iPhone X at more than Rs 1 lakh does not seem worth it

#Indian Railways, #HSR, #Ahmedabad-Mumbai Bullet Train, #Lok Sabha elections 2019
The views and opinions expressed in this article are those of the authors and do not necessarily reflect the official policy or position of DailyO.in or the India Today Group. The writers are solely responsible for any claims arising out of the contents of this article.