Why Mumbai rains make me nostalgic

If you can endure the city, you may locate within its confines something akin to a drug-addled haze, where everything floats and you simply go with the flow.

Mumbai gets a bad rap every year during this season for the inability of the administration to both forecast the torrential rains that strike the city and take due preventive measures. Local train lines get flooded, flights get cancelled, and everywhere is uninterrupted ruckus in the middle of which we are asked to look at pictures of water-lashed beauty and salute that perennial favourite: the city's "spirit".

When I lived in Mumbai a few years ago, I worked weekends and my offs fell on Mondays, which is when I did my weekly grocery shopping. Monday was also when I imagined myself as a flâneur raring to explore the sights and sounds of a city that, I had been told, is the only authentic Indian cosmopolis. During my jaunts, South Mumbai offered the most stunning sights. Still largely colonial in architecture, the area abutting Fort is a visual feast that houses tall buildings, beautiful arcades and charming restaurants. There is so much to see that one can spend blissful hours and come away with something new every time. 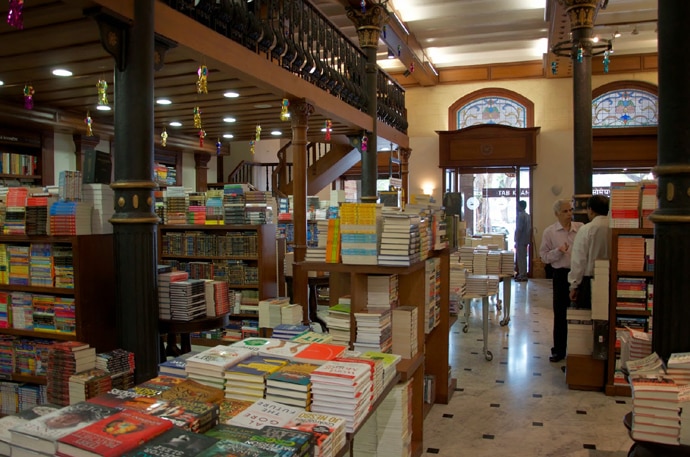 Why were these Monday jaunts so important to me? It was an almost religious need, if I can say so, to visit places in Mumbai where I could, even if momentarily, get away from the thunderous roar of the city outside. I would get off at Churchgate and saunter into, say, Kitab Khana, a double-storey bookshop just off Flora Fountain. For me, the bookshop represented both tragedy and sublimity. On the one hand, wreathed in old-world charm, it welcomed patrons with an absence of huffing and jostling that I had not experienced anywhere else in Mumbai.

On the other hand, in so doing, its very presence attested to a diminishing trade. Even as I sought it out, I knew that like other brick-and-mortar bookstores, it too faced an uncertain future. In a world of Flipkarts and Amazons, what hope for a Kitab Khana? But the analogy represented for me something deeper. Where else could I spend hours away from the living, breathing memory of the just departed local train? Where else could I briefly avoid the unmitigated cramped-ness of my quarters in the city's north? Browsing hundreds of titles, picking them up, reading them and deciding what to do with them was a joy in itself, but Kitab Khana also stood for something that my soul hungered for in Mumbai.

Any peaceful spot for reflection was the ultimate prize in a city that not merely rushed forward, but was ill at ease with those who did not want to, who could not bring themselves to join the milling crowds running for the next bus or the next train, water to the knees be damned. When people say they miss Mumbai's buzz, what they are really saying is that they miss this lack of choice that the city forces upon you. There is another kind of peace to be had in Mumbai, I learnt subsequently. If you can endure the city and become one with its giant humanity, you may locate within its confines something akin to a drug-addled haze, where everything floats and you simply go with the flow. That can be a thrill in its own right, if something I could not take to.

When friends indicated that Mumbai would be the springboard for my writing career, I was chary, even dismissive, for the longest time. How could a city where living one day to the next is a struggle provide fodder for an activity that requires contemplation and silence, I reasoned. Curiously my friends were right, but not in the way they intended. Mumbai can and does provide fodder for writing. But that was not the reason I wrote more and, I hoped, better when I was there. The reason is that writing itself, like Kitab Khana, became a sort of refuge, a much-needed distraction into the private and the personal from the public way of living in the city. Painful, distressing writing offered a more rarefied relief than the tiny, workaday constraints of surviving in Mumbai.

My harried relationship with the city did not emerge for want of trying though. In the beginning, I was happy to explore the city’s inherent dichotomy. After a long day in office, I would sometimes treat myself to a cab home. As I reached the traffic signal that leads into Elphinston Road, I would consider ordering dinner, picking up the ironed clothes from the presswala, asking for a five-litre Bisleri to be delivered, and other odds and ends. All of this was new and exciting. I was living by myself for the first time. I was earning and making a life. The city to me was new but, in its willingness to subsume everything, it was also very old. To me, it was a city with a purpose. I was always looking ahead, in my mind, from whatever I was engaged with. It had unleashed a certain restlessness of the soul.

But it was too much. The city did offer me lessons, and perhaps someone other than me would have learnt the right ones. It opened new vistas for me, and allowed me visions that were fresh and fantastic. But it also overwhelmed me, ultimately. I felt I was going to lose myself in the absence of an anchor, and the city around me would just shrug and move on, as it does every time one of its many abiding tragedies comes visiting.

#Cities, #Kitab Khana, #Monsoon, #Mumbai Rains
The views and opinions expressed in this article are those of the authors and do not necessarily reflect the official policy or position of DailyO.in or the India Today Group. The writers are solely responsible for any claims arising out of the contents of this article.