Not long before Silicon Valley acquiesces en bloc and its techno-utopia becomes a handy tool for the fascists.

Surge pricing has been turned off at #JFK Airport. This may result in longer wait times. Please be patient.

In a move that has been seen as Uber’s typical anti-worker stance – the app-base ride taxi aggregator is mired in several cases alleging labour exploitation, corporate surveillance and sexual assault on passengers – this decision by Uber to continue business as usual during unnaturally trying times, despite employing a workforce that’s expectedly and predominantly immigrant-heavy, has been widely condemned. To the extent that Twitter saw #DeleteUber trend for two whole days, when users and protesters posted screenshots of them deleting the app form their smartphones, embellished with reasons that are dipped in politicised profanities.

Scores of people are deleting Uber after the company serviced rides at JFK airport while taxis were striking against muslim ban #deleteuber pic.twitter.com/D8cJMlxOxQ

In response, Uber’s CEO, the glib Travis Kalanick, first fronted an “internal email” (now posted on Uber’s website) that he had sent across to everyone working at Uber, expressing concern for the drivers stuck abroad who wouldn’t be able to return to the US for at least 90 days, until when the present travel ban is valid. However, unlike the NYC Taxi Workers Alliance’s sharp and strong criticism of the Trump administration, calling the ban “inhumane and unconstitutional”, Kalanick’s email reeked of lip-service and trying to please all. Hearteningly, in his email Kalanick talked of ensuring the wages of the compromised taxi drivers for the period they are affected – 90 days – on a pro bono basis, as well as arranging for their legal representation, among other aids. However, what stood out was Kalanick’s eventual insistence that he has been asked and has indeed joined President Trump’s business advisory council, which include a host of other tech barons and old corporate heads such as Tesla chief Elon Musk, General Motors CEO Marry Barra, Pepsi CEO Indra Nooyi, Disney CEO Bob Iger, among others.

Notably, Elon Musk has already come under heavy criticism for trying to mollycoddle the Trump administration, by not only participating and cooperating with the new regime in the White House, but somehow insinuating (in his cryptic tweets) that Trump is mis-portrayed by the media (better to read source material).

That Musk – unlike say Starbucks head Howard Schultz, who has promised to hire 10,000 refugees over the next few years, or Facebook chief Mark Zuckerberg, who criticised the rabid anti-immigrant order saying his Chinese American wife Priscilla wouldn’t be in the US if immigrants weren’t welcome thirty years back – is already acquiescing to Trump’s overtly racist administration, while Uber’s Travis Kalanick is trying to pass off his war-profiteering as judicious reasoning with the devil (“principled confrontation”, to use his own words) are telling signs of the times to come.

How similar are the responses of Uber to what Paytm did in the wake of Prime Minister Narendra Modi’s demonetisation order on November 8, 2016. Not only did Paytm bring out a full cover page advertisements congratulating Modi using the prime minister’s picture (an illegal move if minus the PMO’s approval) in a number of national dailies, it went on and on praising the move that had cut off millions of Indians from their own money, rendering the saved hard cash useless, even as they did not have bank accounts to deposit the demonetised currency into. 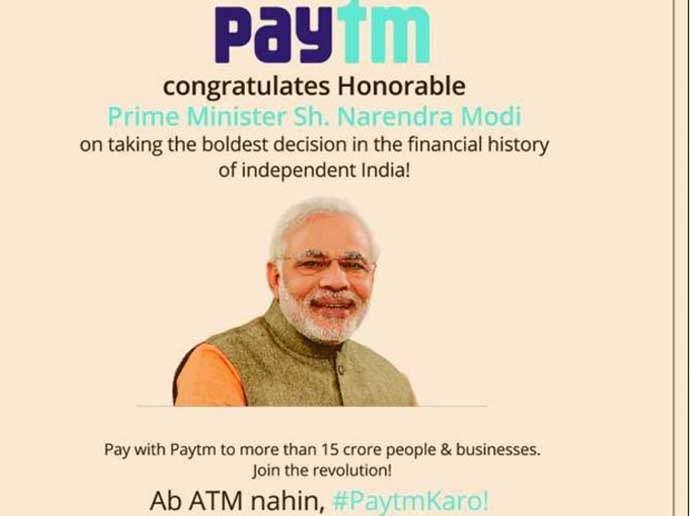 Paytm, along with the latterly launched Jio Money from Reliance, not only remained condescendingly oblivious to millions of Indians suffering, going hungry and some even driven to their deaths out of stress and panic induced by the resultant cash crunch, they brought out advertisements, on print and television, that mocked the protests and media resistance (from a few sections) that questioned, resisted and exposed the demonetisation drive for what it was.

While those criticising it saw demonetisation as a method to recapitalise the bad loan and debt-ridden banks, particularly the PSU banks and an overnight plot to legitimise online financial technologies – such as the digital wallets, mobile and app-based banking – at the expense of tarnishing cash as a symbol of corruption, PayTm and its clones, as well as the biggest shark in the ocean of smartphone banking – Jio Money, saw this coercion as shining example of Modi’s statesmanship.

Needless to say that painting the cash economy as black economy backfired to the extent that even the Indian GDP, 58 per cent of which is held by its richest one per cent, shrunk is the fourth quarter of 2016, with the growth rate hurtling down to 6 per cent from a reasonably healthy 7.1 per cent in the end of September 2016. Uber’s response has been marginally better, insofar as the company has at least put out a pusillanimous reaction, pointing out the grave difficulties its employees (or “independent workers”/”contractors”, as it likes to see them as) would be facing because of President Trump’s travel ban.

Nevertheless, Uber’s longstanding history of systematically breaching labour laws, paying less than minimum wage to its employees, dodging rules to brand them as not wage-earners but external contractors, etc, has meant that its app-based solutionist approach to the world’s crumbling public transport system – a primary infrastructure – is basically exploitative, with deep-seated fascist tendencies. Uber has been embroiled in law suits and cases that allege labour exploitation, corporate surveillance and sexual assault on passengers. [Photo: Agencies]

The hallmark of Silicon Valley has been to talk big and design the future in such a way that technology becomes the substitute for the State altogether, particularly the State in its abstract idea and tangible reality. Hence, the rise of social media and GPS-based cab aggregator apps – a peculiarly Silicon Valley invention ostensibly to connect people and make communication and travel cheaper and instantaneous – became a ready mine for surveillance to fester.

Despite Mark Zuckerberg’s altruistic intentions to bring free internet to all, particularly to developing countries like India that despite its substantial GDP wrestles with staggering poverty, the fact of the matter is that the Trump administration is partly the result of Facebook’s reliance on algorithm to pick, trend and share news. That social media split vertically along the Red and Blue zones, which sealed off the Democrat and Republican supporters in their respective ideological bubbles, becoming increasingly clueless to the messiness of the lived reality, meant that Trump’s victory was a “black swan” event. A black swan event in the same way that Adolf Hitler rise to lead the post Weimar Republic Nazi Germany – the Third Reich – was one. 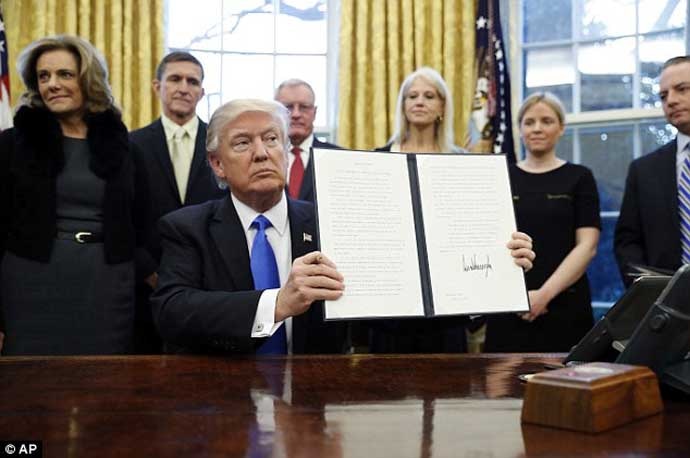 Donald Trump's executive order has been mostly criticised by Silicon Valley, but tech moguls like Elon Musk of Tesla and Travis Kalanick of Uber have failed to condemn it unequivocally. [Photo: Agencies]

Silicon Valley – a 40 per cent immigrant industry, founded, run and sustained by czars of immigrant origin – despite vehemently resisting the new possible restrictions on the H-1B visa that could cripple its hold on the American economy, has nevertheless remained cunningly removed from the decidedly devastating foreign and domestic policies of respective US administrations. Other than a few instances, it has shown remarkable cooperation with US government’s state surveillance projects, particularly Prism programme of the NSA (National Security Agency) that was exposed by whistleblower-in-chief Edward Snowden.

In addition, despite being platforms for change, Silicon Valley, while supplanting Wall Street’s hold on the American and indeed the world’s cultural imaginary – a futurist utopia of tech-savvy solutions to problems of highly political nature – has remained aloof and opportunist, espousing a completely misleading notion that science and indeed technology are apolitical entities.

Although, resistance from scientists (evident in the now spectacularly famous Twitter handle @RogueNASA), academicians and civil society activists is coalescing now to unite against Trump, expecting Silicon Valley to fund or lead the protest is both futile and ignorant.

Just like during the Third Reich, a “supermanagerial” executive class ensured the smooth and efficient functioning of a regime that drew its political capital from ethno-nationalism/fascism, Silicon Valley’s “post-ideological” stance and self-proclaimed aversion to day-to-day politics, say for human rights, freedom, liberty, etc, make it particularly susceptible to falling in line en bloc and go from rhetorical resistance to active cooperation with the Trump administration.

Uber in America and Paytm in India are really the first movers in a terribly depressing new world order. It would be naïve to expect that Silicon Valley cannot not hold the fort for the beleaguered exploited masses of the world.

#Donald Trump, #Paytm, #Uber, #Muslim Ban
The views and opinions expressed in this article are those of the authors and do not necessarily reflect the official policy or position of DailyO.in or the India Today Group. The writers are solely responsible for any claims arising out of the contents of this article.