If the BJP loses in UP, Gujarat and Punjab, the next general election will be wide open.

When BSP supremo Mayawati heads to Ahmedabad on Thursday (August 4) to meet the victims of Una Dalit atrocities, she might bump into BJP president Amit Shah at the airport. Shah is also in Gujarat to select a replacement for Anandiben Patel, who resigned from the post of chief minister on August 1.

Mayawati's visit to Gujarat, after the Dalit uprising and Patel quota agitation consumed Prime Minister Narendra Modi's handpicked nominee Anandiben Patel, is proof of the coming of age of the Dalits.

Dalit anger has been brewing for a while. It burnt bright when Dalit scholar Rohith Vemula was driven to suicide, his suicide note a poignant testimony where he said "my birth is my fatal accident".

Anandiben is the second politician to lose her job after former HRD minister, Smriti Irani, who mishandled the Vemula episode and incredibly enough, wagged her finger at Mayawati, a four-time Uttar Pradesh chief minister, in Parliament during the Vemula debate.

Dalit anger threatens to consume the BJP's ambitious electoral bid in Punjab which has the country's highest Dalit population, Uttar Pradesh and even Gujarat, home to both Shah and Modi. The flogging of Dalits in Una has put the BJP in a spot of bother.

This is a tipping point for the Dalits. They have refused to pick up dead animals, whose rotten carcasses have been piling up, until they are given assurances that the self-proclaimed gau rakshaks, who seem to have state support in BJP-ruled states, are controlled. Thousands came out in a protest march last week which ended Anandiben Patel's run in Gujarat.

A senior BSP leader who is accompanying Mayawati told me, "Two things are striking. The first is that unlike UP, where we have Behenji, it's almost a leaderless protest in Gujarat and yet there they (Dalits) are fighting for their dignity and livelihood. The second thing in the marvellously inventive mode of protest - it's without violence, very Gandhian, and yet so brutally effective."

Even Mayawati marvelled at the nature of the protest and, after sending her representatives last week, has decided to go to Una herself.

The BJP which has long used the holy cow as a lightning rod for electoral gains is stuck now on the horns of a dilemma.

Modi had spoken ominously about the "pink revolution" at rallies leading up to the general election in 2014, and the BJP governments in Haryana and Maharashtra, led by individuals with strong RSS links, have brought in draconian cow protection laws. Jobs in the leather industry, done mainly by Muslims and Dalits, have fallen to record lows.

But with their inventive protest, the Dalits have reclaimed the narrative.

Also read: Can BJP find its next Narendra Modi in Gujarat?

My sources tell me, recently the BJP got three internal surveys done in Uttar Pradesh which showed that the party had registered a sharp erosion in support. These surveys were done after BJP vice-president, the now-expelled Dayashankar Singh, called "Mayawati worse than a prostitute".

These surveys have Shah and Modi worried because the "controlled mobilisation" they had planned which was supposed to target Muslims, and also Dalits, has now spiralled out of control. 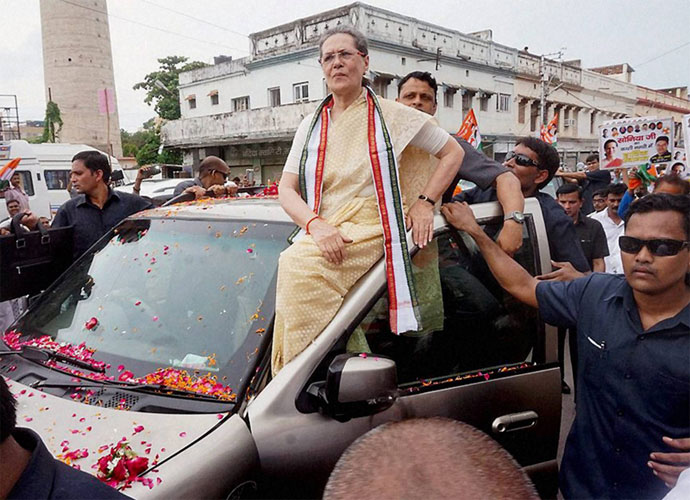 Politics around the cow is just a dog whistle for the hate-mongering by sections of the Sangh Parivar towards Muslims and Dalits.

Even after Una, a defiant BJP MLA Raja Singh on Sunday (July 31) gave an interview where he declared, "I extend my full support to all those who take it upon themselves to teach those few Dalits a valuable lesson." It is incredible that a lawmaker is extending open support to vigilantes. An irate Shah called and ticked him off and imposed a gag order.

But the damage to Shah's electoral projects is incalculable.

Coupled with that is an epic family drama between Akhilesh's father Mulayam Singh Yadav and his uncles playing Durbar politics. Akhilesh, who was mocked as a half-chief minister, has recently seen even that authority erode with Mulayam taking back the reins of the Samajwadi Party as he senses an electoral debacle.

Shah was counting on a tacit alliance with the Samajwadi Party, but with the entry of Amar Singh, and with Azam Khan, the party's Muslim face on the war path, an understanding seems unlikely.

For the first time in about 20 years the Congress seems to have decided to actually put up a fight and the huge crowd at Sonia Gandhi's rally in Modi's constituency Varanasi on August 2 indicated this.

Sonia got dehydrated and suffered a bad bout of asthma as the three-hour roadshow got extended to five hours.

Describing the event, Raj Babbar, UPCC in-charge who accompanied Sonia, said: "It was a sea of people that turned out for the Congress. When did you last see such a large crowd? They were sending a message to Modi in his seat."

While the Congress may not be able to convert the numbers at the roadshow into actual winning margins, it will certainly hurt the BJP, says a party leader who was till recently in the race to be the party's face in Uttar Pradesh.

The worst affected by even a slight Congress revival will be the BJP according to the party's own surveys.

For the BJP, replicating its grand success in Uttar Pradesh in the 2014 Lok Sabha elections, in which it got 71 seats (73 along with ally Apna Dal) out of a possible 80, in the upcoming Assembly polls looks like a mirage now. The party is unlikely to announce a chief ministerial candidate for the Uttar Pradesh elections, according to sources.

As a result, the BJP will be the only party entering the elections without a chief ministerial face.

Mayawati has got an unexpected bounce and the Dalits are consolidating totally behind her. Add the Muslims and Brahmins and it's a winning combination. The Muslim-Dalit unity visible in the Gujarat protest rallies has the BJP worried.

The Congress is targeting Brahmins and Muslims who are fed up with the Samajwadi Party's lip service and its cloak and dagger politics with the BJP.

Sources say the BJP has already written off Punjab as unwinnable owing to the huge anti-incumbency against the SAD-BJP government.

Hardik Patel, Dalit protests and 15 years of fatigue with the BJP may see Gujarat slip out of the BJP's hands. Interestingly, no BJP chief minister except Modi has competed a full term in Gujarat.

With these dismal prospects weighing him down, Shah may be tempted to say that he wants to declare himself chief minister instead of the two contenders Nitin Patel and Vijay Rupani. Alas, Modi and the RSS want to salvage the situation in Uttar Pradesh instead.

With the Dalit rage at an inflection point, Shah, whose hero is Chanakya, may find it impossible to salvage the party's position in the three states that go to polls next year. A loss in all three and the next general election will be wide open.

#Gujarat Polls, #UP Polls, #Amit Shah, #Narendra Modi
The views and opinions expressed in this article are those of the authors and do not necessarily reflect the official policy or position of DailyO.in or the India Today Group. The writers are solely responsible for any claims arising out of the contents of this article.