If I may be so bold to say how I feel, it seems the government of India committed a daylight robbery on the trust of the people of Kashmir.

First, the government seems to have suggested that a large number of security movements, the evacuation of tourists, the shutting down of schools and colleges, were because of external terrorist threats and had nothing to do with the long-standing fear and suspicion of the removal of Jammu and Kashmir's special status. As it turned out, this was not the case. 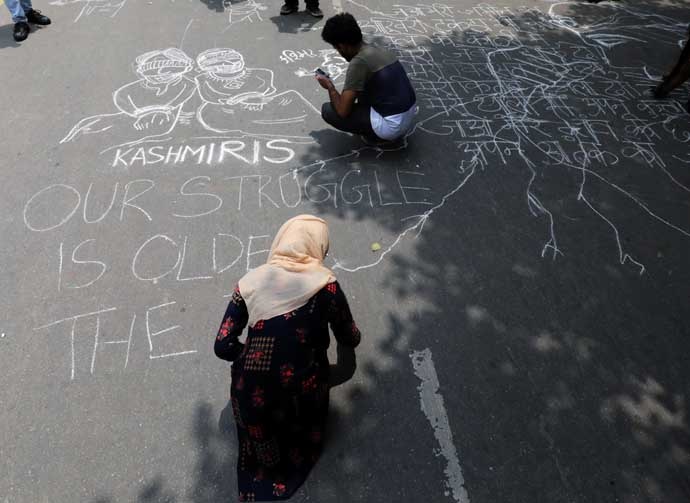 All they're left with? Kashmir was put under lockdown without any intimation. How can they feel free? (Photo: Reuters)

On August 3, the J&K Governor met regional leaders and assured them there was no such move. But from midnight of August 5, the government imposed a communication shutdown in Kashmir — mobile and broadband internet services, telephone lines, cable TVs were all shut down and Section 144 imposed.

Practically the entire state of J&K, including mainstream political leaders, was put under house arrest without giving any explanations and justifications.

The next morning, the government used various Constitutional and Parliamentary mechanisms to ruthlessly and mercilessly do what has been unthinkable for decades to the people of Kashmir — something they were ready to die for, something against which they had begged and pleaded with the government — the abrogation of Article 370 of the Constitution.

The government didn't stop at this though.

It divided the state into two parts and stripped it off the status of 'State', reducing it to a Union Territory or, as P Chidambaram said, "reducing states to 'vassal' and 'colonies' of the central government."

It would be a while until we get to know whether the actions would stand the test of legality. A series of cases are likely to be launched and the first such petition has already been filed. Legal opinions — both for and against the move — have emerged. Justice (Retd) K Chandru of Madras High Court is reportedly of the opinion that the government's action is not legal, while Justice (Retd) AK Ganguly of Supreme Court has reportedly said there is nothing unconstitutional.

Whether the government broke any law or not, they certainly broke the people's heart and trust.

In an ideal democracy, the state is supposed to be the caretaker of not just our rights but also our emotional needs, like happiness, love, trust and insecurities. In our moments of fear, it is supposed to hold our hand and tell us, "Don't worry." But the state took away from the people of Kashmir something they held closest to their hearts.

To whom will Kashmir turn to now? 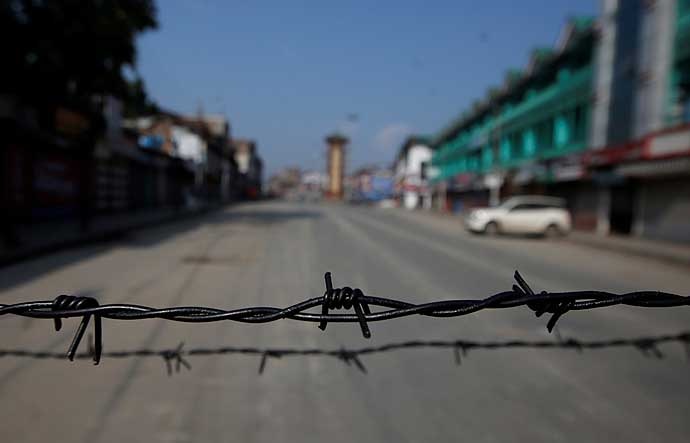 Iron Boundaries: How do we seek and reassure Kashmir? (Photo: Reuters)

It is being argued that whatever the government had done is for the benefit of Kashmir and its people. Be that as it may, even if a cancer patient has no other means of survival except an amputation, she should be informed and her consent should be obtained before the procedure. Imagine you visited the doctor for some tests and the next thing you know is that you are waking up in a hospital bed with your legs amputated, and people around you are dancing and bursting crackers celebrating your loss.

Abrogation of Article 370 in J&K has been one of the cornerstones of the BJP-RSS's political journey for over four decades, and it was also part of the 2019 BJP manifesto — but it was never clear as to why was it such an important issue anyway?

One of the reasons cited by Amit Shah is that Article 370 was apparently responsible for keeping Kashmir poor and underdeveloped. But his argument doesn't seem to be backed by data as several Hindi-belt states ruled for long by the BJP lag far behind Kashmir in the development index. The next argument could be 'love and concern' for Kashmiris, but that is hard to believe too, because if somebody you loved had a special privilege, you won't celebrate it when they lose it in a brutal way against their will while they are locked up and gagged — even if it was for their own benefit.

The BJP and allied groups are celebrating across India. BJPspokesperson Raman Malik apparently said on a TV debate, "This is Diwali for us." while a BJP MLA said, "We can now marry fair Kashmiri girls." What can possibly explain these celebrations except that these leaders see Kashmir as now open for exploitation, with 'marry' being a euphemism for loot and plunder, and 'Kashmiri girl' possibly a euphemism for land and natural resources?

Has there been any message that they truly love Kashmiris?

For decades, Kashmiris have been vilified in India. They have been looked at with suspicion, fear and hate. Every time there has been a terror attack, the common Kashmiris were hounded as if each one of them was a terrorist. Post-the Pulwama attack of February 2019, Meghalaya Governor Tathagata Roy even made a remark to "boycott everything Kashmiri". No action was taken against the Governor.

Such celebrations imply that the BJP was never interested in Kashmiri people, but only in the piece of land.

Rahul Gandhi has rightly said, "This nation is made by its people not plots of land."

National integration isn’t furthered by unilaterally tearing apart J&K, imprisoning elected representatives and violating our Constitution. This nation is made by its people, not plots of land.This abuse of executive power has grave implications for our national security.

If Kashmir is to be fully integrated and developed, the BJP should have first tried to win the trust of Kashmiris by way of ballots. But they failed in that attempt, having done poorly in the state Assembly elections. An attempt to form the government by an unholy coalition also failed and Governor's Rule was applied. After six months of Governor's Rule, President's Rule came into force in December 2018. State elections were expected to be held along with May 2019 General Elections, but they were apparently avoided due to 'security reasons'.

It now seems to many like a clever ploy from the very beginning.

One year after dissolving the Assembly, a Constitutional trickery is done to eliminate the state altogether, snatching away from the people of Kashmir their right to elect their own representatives.

This is demonetisation redux.

An unimaginably difficult decision is unleashed upon citizens and their sufferings are dismissed as 'minor glitches' for the greater good.

We now know there was no greater good in demonetisation either — in fact, the economy is still struggling to recover from the shock.

From demonetisation to Kashmir, Narendra Modi has trampled on people's trust and marched on to personal and political glory. Media and 'bhakts' cheer this because they think the ends justify the means. If anybody criticises the 'means', they are immediately labelled as an enemy of India. Nobody is allowed to have a conscience that is against the populist mob mentality.

Modi's pattern to justify his ruthless means, to meet an arguably justifiable goal, is always the same. Exaggerate a particular problem and find a person or family or community to blame and vilify. In the run-up to the 2014 General Elections, scams and corruption were exaggerated and the Gandhi family was blamed. During demonetisation, a hype was created about black money and perceived 'rich people' were made the targets of hate. Presently, a post-truth narrative is being created that all of Kashmir's problems are due to Article 370 and the Muftis and Abdullahs are corrupt enemies.

It is easier to hate people than structural problems. So, the masses are fed propaganda that corruption or poverty or terrorism isn't part of a system that needs change, but the creation of just one family or community, and once the PM and BJP will heroically defeat that one enemy, everything will be magically better. So, when a ruthless path is taken to destroy the perceived enemy, the supporters cheer — and mock and abuse anybody who objects to the methods on humanitarian grounds. 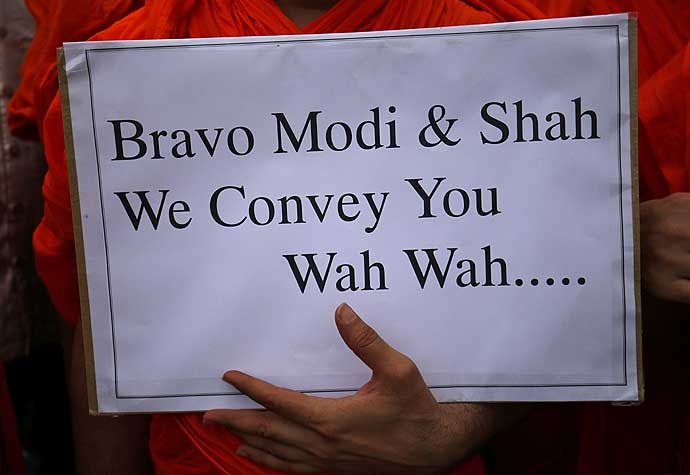 Party Time: India is celebrating apparently without caring about the sentiments of the Kashmiri people. (Photo: Reuters)

Today, the BJP leaders and right-wing Hindutva groups are celebrating, completely devoid of empathy for Kashmiris who are still not able to communicate what they feel. For days, parents and children across India have not been able to speak to each other. What will happen if somebody falls sick, somebody is on their death bed — will they not even be able to see or hear from their family members one last time?

Ironically, the PM recently tweeted in five languages spoken in the territory to communicate with its people and congratulate them for their liberation, National Security Adviser (NSA) Ajit Doval is sending what seems to me carefully staged videos to assert that Kashmir is normal, and non-Kashmiri people are starting Twitter trends such as #KashmirWelcomesChange — all this when real Kashmiris are still under a communication blackout.

This is truly a Kafkaesque nightmare that India is witnessing today.

I only write. I couldn't do anything more to protect the civil liberties of the Kashmiri people.

Post your comment
#Amit Shah, #Rahul Gandhi, #Narendra Modi, #Article 370
The views and opinions expressed in this article are those of the authors and do not necessarily reflect the official policy or position of DailyO.in or the India Today Group. The writers are solely responsible for any claims arising out of the contents of this article.