Congress-style sycophancy seems to be overtaking the BJP too.

The beginning of the end for Indira Gandhi came — though few realised it at the time — when Congress President Dev Kant Barooah declared in 1974: “India is Indira and Indira is India.” It would take three more years for Mrs Gandhi to be voted out of power in the 1977 Lok Sabha election, held shortly after the draconian 1975-1977 Emergency was revoked by her.

Building a cult around a politician is always dangerous. Prime Minister Narendra Modi is now treading near the quicksand of cult, thanks to a culture of sycophancy that the BJP has imported from the Congress. Modi discouraged sycophancy. But worryingly, he seems to have started enjoying it. (Photo: PTI/file)

Wagh defended his tweet thus: “We consider India as ‘Bharat Mata’, a goddess. The devotion with which Modiji is serving ‘Bharat Mata’ as the ‘pradhan sevak’ is like a God for us.”

Ironically, Modi himself discourages sycophancy. But feudalism is so ingrained in India’s political culture that not only has he been unable to stop fawning sycophants, he is worryingly beginning to seem to be enjoying it. The long-term consequences are not propitious.

Sycophancy takes many forms. It is most nakedly visible in dynastic political parties. The Congress pioneered dynastic politics. It will forever be tarnished as the progenitor of the sharp feudal turn Indian politics took in the mid-1960s.

Only the Communists, Nitish Kumar’s JD(U) and the BJP (with exceptions like Vasundhara Raje, Poonam Mahajan, Pankaja Munde and Jayant Sinha) seem immune to the disease of political dynasty. India's democracy already has far too many 'heirs'. (Photo: PTI/File)

The usual argument in favour of political dynasts is that they are elected. They thus have electoral legitimacy. Besides, aren’t the children of businessmen and filmstars also dynasts? Why single out political dynasts?

Here’s why, as I explained in my book: “An argument advanced in favour of political dynasties in India is superficially seductive: the sons and daughters of lawyers become lawyers. So do doctors, businessmen and actors. But professionals in medicine and law earn their degrees. Businessmen owe their position to specific financial shareholding. Actors are made and unmade every Friday. The purpose of democracy is to widen voter choice — not narrow it. By choosing political dynasts over professionals, parties limit the choice voters might otherwise have had and lower the overall level of competence in parliament.”

Political parties have an obligation — a duty — to introduce merit in a feudal society, where dynasty is worshipped. Indian politicians instead cynically exploit this socio-cultural weakness to retain power. Politics is thus no longer just the last refuge of scoundrels, but the last refuge of unemployable sons, daughters, brothers, nephews and nieces.

Modi, like Nitish Kumar and those in the Left, has no heirs. His mother lives with one of his brothers in a modest flat, travels by auto rickshaw and stands in a queue like everyone else.

By contrast, the families of the Gandhis, Abdullahs, Pawars and other political dynasts live and travel in luxury. Khadi kurtas at home, Savile Row suits abroad.

Has the disease caught up with Modi now? There are some worrying signs. Full-page advertisement in newspapers feature photographs of a smiling Modi dwarfing others, including chief ministers and cabinet ministers — whether announcing a new welfare scheme or inaugurating an infrastructure project.

Even more worrying is the Congress-style sycophancy that has overtaken the BJP. Cabinet ministers are often afraid to speak their minds to Modi. MPs are mute. Those who speak publicly often misspeak.

In a healthy democracy, dissent is a vital ingredient. Constructive ideas collide with one another. Only from this constant friction of views can innovation flourish.

The Modi cult is not a cult as yet, but sycophants among the BJP’s ranks, like Avadhut Wagh, could help it emerge. The Prime Minister must put a stop to it before it is too late.

The fact that he tolerates often venomous criticism from rebels within his own party — Yashwant Sinha and Shatrughan Sinha being two prominent examples — shows that Modi is open to harsh strictures against his policies. 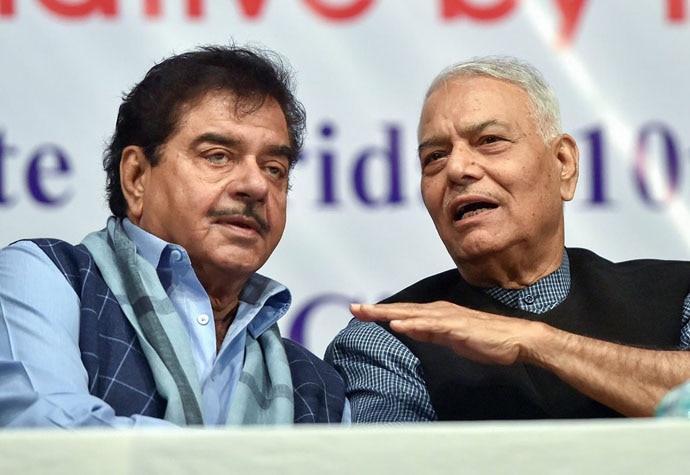 The kind of attacks Yashwant Sinha and Shatrughan Sinha often launch at the BJP and the PM show Modi is open to criticism. (Photo: PTI/file)

But the two Sinhas are exceptions that prove the rule. What the BJP needs are not fearful ministers and fawning party workers like Avadhut Wagh, but robust criticism of policy.

Unfortunately, the gnarled old media, still under the UPA’s long-lasting spell, is so unhinged in its criticism of Modi that a civil engagement with it becomes impossible.

But a change is necessary.

Six months before the 2019 Lok Sabha election, Modi needs to start addressing regular press conferences, take uncomfortable questions head-on from his several media critics, and show that he is what he says he is: an honest kamdar, not an entitled namdar.