'Modi is the most powerful political figure of his age, a time when even newsrooms are split'

Rajdeep Sardesai needs little introduction in the world of Indian journalism. He has reported on and analysed Indian politics from the 1980s onwards, breaking some of the biggest stories, and breaking down some of the biggest moments and movements that have roiled India.

Newsman: Tracking India in the Modi Era is a collection of Rajdeep Sardesai's newspaper and digital writings during the rise of Narendra Modi to power. In this collection, Rajdeep Sardesai both tracks a complex and charismatic political giant – and studies a swiftly changing social landscape around him. Edited excerpts from NEWSMAN: Tracking India in the Modi Era by Rajdeep Sardesai (with permission of Rupa Publications India)

The Ashok Hotel in the national capital, a stone’s throw away from the Prime Minister’s residence, is where ‘old’ India meets the ‘new’. Built in 1956, Delhi’s iconic five-star hotel is a relic from the Nehruvian era, its pink sandstone façade and imposing structure reflective of an age when the public sector symbolized the ‘commanding heights of the economy’.

Picture of the Ashok Hotel in Delhi. Grand and beautiful. (Photo: Ashok Hotel)

The hotel lobby is still populated with kurta-pajama-clad fixers and networkers from the license-permit raj, only they are now jostling for space with the sharp-suited gents of a rapidly globalising world in which India is the fastest growing large economy.

The Ashok was perhaps the perfect venue for the Bharatiya Janata Party (BJP) to host the fourth-anniversary celebrations of the Narendra Modi government in May 2018.

The hotel may still carry the heavy presence of state power in its style and functioning, but the Modi government’s slick audiovisual presentation had a distinct corporate veneer. In the presence of party president, Amit Shah, and senior ministers, Rajnath Singh and Nitin Gadkari, and with the entire national media in attendance, the acting finance minister, Piyush Goyal, was playing impresario.

In 2017, Goyal had taken nearly an hour to finish, keeping us waiting for lunch.

‘I hope it will be shorter and crisper this time,’ I said. ‘Well, we’ve completed an additional year now so it might take a bit longer, else you will complain that we have nothing to showcase in the last year!’ laughed Mr Goyal.

Sure enough, the ‘performance’ stretched on and on, ending with a song prepared for the occasion, a new catchline – ‘Saaf Niyat, Sahi Vikaas’ (Clean Intent, Right Progress) – and an upbeat slogan for the 2019 general elections – ‘2019 mein phir ek baar Modi Sarkar’ (In 2019, the Modi government once again).

As I was leaving, one of the party spokespersons smiled at me and said, ‘Hope you have enough headline material for a prime-time debate!’

That evening, the Modi government’s media blitz didn’t make it to my nightly bulletin: a dozen protesters had been shot dead in Tuticorin during demonstrations against a copper plant. It was only a temporary break from the Modi-centric news cycle. 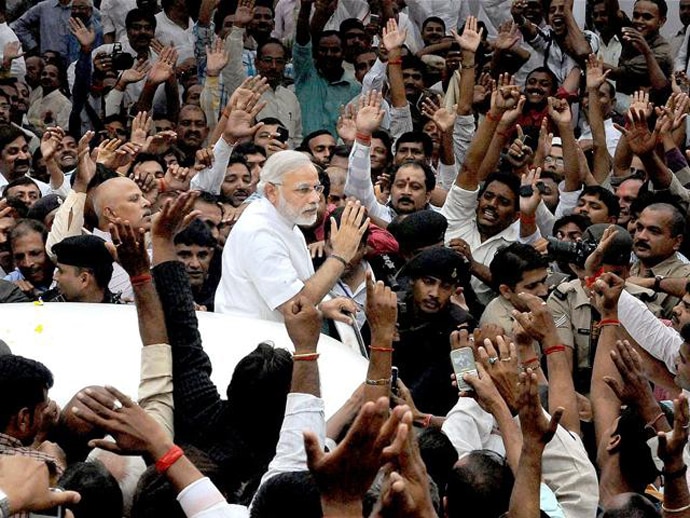 The man in the centre of it all: Narendra Modi on a roadshow. (Photo: PTI)

Truth is, never before in the history of independent India has a single individual, his government and party occupied so much of news space over a sustained period of time. ‘Headline management’ and ‘event marketing’ is how critics of the Modi government choose to describe the official media blitzkrieg. ‘We are simply telling a good story well,’ is the government’s pat response. The truth, as often is the case, lies somewhere in the in-between, the gap between hype and reality often lost in the media cacophony.

I have spent much of the last four years trying to find a way out of the stridency that surrounds us in a post-truth world, attempting to make sense of the fine lines between facts and propaganda, between ‘fake’ and ‘real’ news, while firmly holding onto my liberal beliefs.

Not easy, I might add, given the ever-sharpening and polarised ‘Right’ versus ‘Left’ political environment in which one is often caricatured as an anti-Modi journalist. Instead of ‘samvad’, or dialogue, an adversarial ‘them’ versus ‘us’ binary now envelops the media narrative – if you criticise the Modi government, then you could well be targeted as ‘paid media’, ‘bikau’, ‘libtard’, ‘antinational presstitute’; if, on the other hand, you endorse a government project or policy, then you might be under siege too; this time accused of having ‘sold out’ to the establishment.

To be a newsman in this age of ‘embedded’ journalism is to be pushed into taking sides when the situation calls for a firm, non-partisan assessment of objective realities. It is this striving to create a space for an independent opinion that has driven my political commentary ...

At the center of this news whirl is Mr Modi, a charismatic and controversial figure. He is the most powerful politician of his age, arguably the most dominant in post-Independence India, with the possible exception of Indira Gandhi in her pomp. A majority of Mr Modi’s cabinet ministers appear almost irrelevant ... In the past four years, Mr Modi as Prime Minister has been literally everywhere – from being lauded by non-resident Indians (NRIs) in New York’s Madison Square to spending Diwali with soldiers in Siachen and, more recently, taking up ‘fitness’ challenges on social media, not a day has passed when he hasn’t been in the arc lights. The energetic and combative persona comes with a rider: this is a Prime Minister who hasn’t addressed a single press conference, has chosen to keep most journalists at arm’s length, prefers one-way communication over social media sites like Twitter and engages directly with his voters, either at large public rallies and grand events or through a monthly interaction on radio. In the Prime Minister’s radio show, Mann Ki Baat, the Great Leader lectures, and the public must listen.

This is where he unveiled his ‘Swachh Bharat’ vision, making sanitation and toilet building integral to public-private partnership (PPP). This was also the rousing speech where he promised a nation fatigued with high-level corruption: ‘Na khaoonga, na khane doonga’ (Neither will I accept bribe, nor will I allow anyone to do so). The oratorical flourishes were in sharp contrast to his predecessor’s staid recitation of government programmes. Wearing a saffron Jodhpuri safa (turban), this was a Prime Minister as a demagogue using the occasion as a stirring call to action. For Dr Manmohan Singh, the Independence Day speech was a tedious annual ritual, whereas for Mr Modi it is an opportunity to capture eyeballs and set the political narrative.

And yet, the Prime Minister’s ‘big bang’ decisions, be it demonetisation or surgical strikes across the Line of Control (LoC), suggest a risk-taking, muscular leadership ... Whether those risky, arguably unilateral, decisions that carry a stamp of authoritarianism have been beneficial to the country or not, is the subject of intense debate – demonetization, in particular, has clearly left India’s sprawling informal sector in some disarray, affecting job creation and business morale, with the original goal of moving to a ‘cashless’ economy far from realised. But each of these disruptive policy choices has undoubtedly given Mr Modi the popular image of a tough, decisive leader.

Sadly, the polarisation in politics is mirrored in ever-sharpening divides in our society… Our newsrooms appear equally split wide open ... the core of our prime-time news debates revolves around divisive agendas of religion, identity and nationalism, with politically surcharged and flawed notions of Hindu ‘victimhood’ and Muslim ‘appeasement’ feeding on each other.

It is while engaging in toxic Hindu-Muslim and ‘national’ versus ‘anti-national’ arguments, driven by a rising Islamophobia, that one feels almost caged in a television (TV) news studio.

A reminder of the dangers of the lines between the medium and the message getting blurred by lethal hate agendas was bluntly brought home to me when I was covering the Karnataka elections in May 2018. While enjoying a delicious idli-vada breakfast in an Udupi restaurant in Bengaluru’s upscale Richmond Circle, I was accosted by a group of men who started to heckle me as ‘Anti-Hindu’ while chanting, ‘Modi ki jai’ (Hail Modi).

We later found out that the hecklers worked in leading infotech companies.

If these Bengaluru youth are a symbol of an aspirational and upwardly mobile, ‘neo-middle class’, then we must all worry about what impact this resurgent ‘Hindu awakening’ will have on our social fabric.

Also read: What heckling of Rajdeep Sardesai in Karnataka says about peddlers of hate in Modi's India

#GST, #Narendra Modi, #Newsman: tracking india in the modi era, #Rajdeep Sardesai
The views and opinions expressed in this article are those of the authors and do not necessarily reflect the official policy or position of DailyO.in or the India Today Group. The writers are solely responsible for any claims arising out of the contents of this article.