Optics matter in diplomacy and chemistry between leaders establish terms of engagement.

Prime Minister Narendra Modi’s bear hugs - three within a few hours at the White House - of US President Donald Trump were indicative of positive vibes. That the meetings went beyond get-to-know one another exercise was an achievement in itself.

How Modi managed to use bear hugs or jhappis as currency at the White House is a story that remains to be told. Until then few can doubt that the Indian Republican lobby in the US and the Indian diplomats had worked hard to make Modi visit look a success.

For the time being let’s analyse where does Modi stand in Trump’s pecking order of world leaders. That can provide an insight into potential success of Modi-Trump relations.

President Trump’s use of language, both words and body language, at bilateral meetings with world leaders speak volumes about his preferences and proximities.

Before Modi’s meeting with Trump, most of the analysts in New Delhi as well as Washington believed that the Indian Prime Minister occupied a mid-to-low ranking in Trump’s transactional worldview. That was a myth Modi broke.

It would be a misplaced optimism to think that the vibes would produce expected results. For positive vibes to be translated into positive gains on the ground India will have to give much more than take.

However, optics matter in diplomacy and chemistry between leaders establish terms of engagement.

During his presidency, until now, Trump has used three expressions of warm words for three leaders, which provide an insight into his emotional intelligence as well as calculated diplomacy.

On top of the pecking order is King Salman bin Abdulaziz al Saud of Saudi Arabia. “King Salman my friend ”- Trump said at least half a dozen times after his first meeting with the Saudi monarch in Riyadh on May 21. 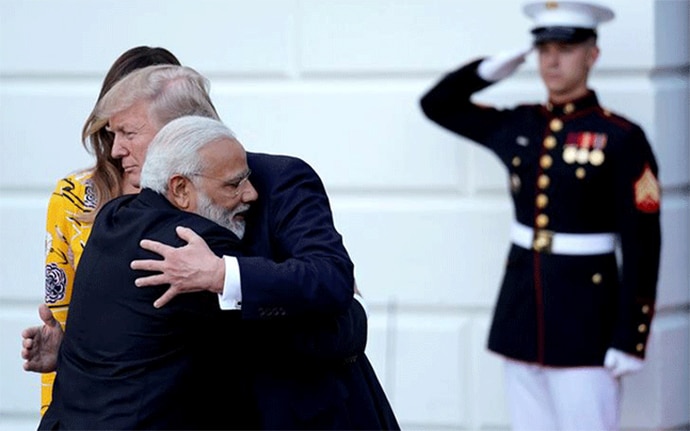 Narendra Modi here looks more happy to meet Trump than the other way around. [Photo: Indiatoday.in]

After Saudi Arabia, Trump landed in Israel, where he repeatedly lauded the monarch as “my friend King Salman” is doing a great work to fight terrorism.

From there in Brussels at the meeting of NATO leaders, Trump used the same words. Again at White House, he paid compliments to the Saudi king in the same language.

He had used the expression “a good man” for the Chinese President Xi Jinping at the Mar-a-Labo retreat meeting. It was repeated whenever Trump referred to Xi in connection with North Korea problem.

And the latest is “a great Prime Minister” and a “true friend” for Modi. While Modi was on way to Washington from Lisbon, Trump used the words “true friend” and repeated it at the White House.  “True friend” doesn’t convey the same warmth as very personal “my friend” Trump has repeatedly used for the Saudi king.

Obviously, Trump doesn’t associate the same importance to Modi as he does to King Salman. Nonetheless, Modi seems to have popped up ahead of President Xi in Trump’s ranking of leaders he has met. Modi can hope to build on the equations he has managed to establish with Trump to secure India’s interests, though that would depend on a host of factors such as what Modi can offer to remain a “true friend” and “a great Prime Minister”.

There were reasons why Trump was all sugar and honey for King Salman. Saudis offered $380 billion on the table, of which $110 billion worth arms deal agreement was signed during Trump’s visit.

Nobody can beat the Saudis on splurging dollars to please the Americans. For dealmaker president Trump, no country can match the petro dollar giant’s largesse.

The Chinese had worked hard to get Trump’s fleeting attention span before Xi’meeting with him. The Chinese diplomats knew the door to Trump’s world opened through his son-in-law Jared Kushner and daughter Ivanka Trump.

That was accompanied by Trump’s own ambition to fix the North Korea problem. As Xi agreed to rein in North Korea’s nuclear ambitions, Trump declared him to be “a good man” giving up harsh words he had used for China during presidential campaign trail.

Three months down the line Xi seems to be running out of Trump’s favour with his inability to bring around North Korea. Trump has already expressed his disappointment on a couple of occasions with China. It’s not yet clear how US-China terms of engagement will be determined during Trump’s presidency.

What will the “true friend” do to keep Trump happy? What will a “great prime minister” do to ensure that Trump doesn’t begin losing patience? What will Modi do to reduce the trade deficit of $30 billion, which Trump bluntly pointed out and demanded “fair and reciprocal” trade relations? There are no answers.

Trump has to keep his home constituency happy, to keep his promises of bringing in more investments and create more jobs. Mere platitudes will not do.

Trump will demand results in due course of time if the trade imbalance continues to grow and India fails to contribute significantly to investments in the US.

There is one takeaway from Modi’s successful visit that points to power of backdoor diplomacy.

Like the Chinese, Modi’s team used the Ivanka card to knock at Trump’s inner world. Trump referred to Modi’s invitation to Ivanka to attend a summit of entrepreneurs in India and happily announced that she had accepted the invitation.

It was a job well done.

#Bearhug, #India-US Ties, #Donald Trump, #Narendra Modi
The views and opinions expressed in this article are those of the authors and do not necessarily reflect the official policy or position of DailyO.in or the India Today Group. The writers are solely responsible for any claims arising out of the contents of this article.