For the first time in independent India, the Left-of-Centre narrative will be seriously challenged.

If you think you have already seen the fiercest ideological battles in the Narendra Modi era, you may be mistaken.

The debates over intolerance and nationalism were storms that shook much. But the twister that is going to play out more truculently, even profoundly changing the old landscape, is on the horizon.

The biggest battle in the next few months is going to be fought over education.

While controversy’s favourite child, Smriti Irani, is going to be its face, in the deep background, faceless people are at work. 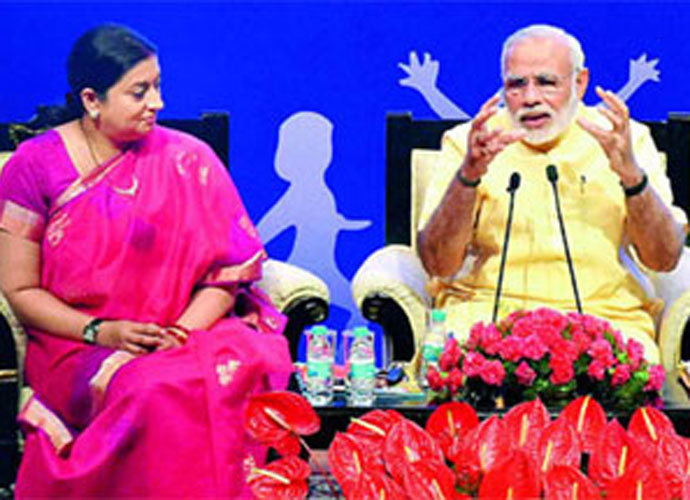 The new policy is supposed to bring defining changes in the structure of education.

The government and its ideological guides want to recast a system which they view as biased, antiquated, irrelevant for large swathes of the population, and a refuge of work dodgers, beneficiaries of Congress-Left patronage and the rank incompetent.

The first salvo is going to be the National Education Policy, for which a massive yagna is afoot. Meetings have apparently been held in 94,000 villages across the country, and more than 1.1 lakh written suggestions are being screened and processed.

The new policy is supposed to bring defining changes in the structure of education, not so much in the content. Vocational training, for instance, is likely to be made part of core education. Industrial Training Institutes (ITIs) may move from the periphery to the mainstream.

In villages, the government may bring rural institutes as ITI equivalents to impart rural-focused vocational training. There could also be a proposal to have Navodaya Vidyalayas (NVs) — residential schools for poor students in the ancient gurukul tradition — in every district.

Most of these schools are going through an acute fund shortage. The Centre may step in to resuscitate the chain.

Also, the sainik school network may be expanded to encourage more students to think of forces as a career. There are more than 20 sainik schools today. The big push will be on regular and time-bound training of teachers. Even yoga will be a component of this. But more importantly, strict monitoring of how much time teachers are spending in the class and how much on junketeering abroad has already started.

Many in the government believe that recent unrest in some universities was fuelled from behind by those rattled by these checks. Also, India’s government institutes may finally adopt the Western "publish-or-perish" credo, in which teachers need to constantly contribute and reinvent.

Besides bringing in accountability of teachers and administrators, the government wants to ensure that non-NET scholarships are distributed among women, minorities, disabled and backward castes; that there is last-mile utilisation of funds; and that students get fellowships through direct benefit transfer.

But the trickier ground is content. The new National Curriculum Framework, which is supposed to come later this year, could be explosive. The Punjab and Haryana High Court in November last year asked NCERT to look into 182 supposed discrepancies and mistakes in Classes VI to XII history books.

The direction came in response to a PIL by the National Centre for Historical Research and Comparative Studies (NCHRCS). The centre’s director, Hemant Goswami, argued that certain shlokas from the Rig Veda and other scriptures had been mischievously translated to mean exactly their opposite.

The Aryan invasion theory is being challenged too, along with interpretations of words like "dasa" and "dasyu". Architects of the new policy are already squelching through the half-lit marshlands of history, working on highly contested patches, encountering dangerous creatures.

For the first time in independent India, the Left-of-Centre narrative in education will be seriously challenged in the coming months; both structurally and in content. This is the battle of all battles, and much ink will spill.

#New Education Policy, #Smriti Irani, #Narendra Modi, #Education
The views and opinions expressed in this article are those of the authors and do not necessarily reflect the official policy or position of DailyO.in or the India Today Group. The writers are solely responsible for any claims arising out of the contents of this article.