Modi’s US visit was a joke. That's what it was

Obama will be gone in January 2017 but he and his team will still be laughing at the vainglorious redneck from India.

Where is India’s minister for external affairs? Why isn’t Sushma Swaraj anywhere in the picture? Shouldn’t she DO something about this bull-in-a-china-shop approach to foreign policy?

It is true heads of government are not obliged to include their foreign ministers on every trip abroad. Surely, though, she can talk to him on his fleeting stays in the capital and tell him what her elite foreign service staff must surely tell her: foreign trips do not a foreign policy make.

Also read: If it was love between Modi and Obama, wait till he sees Trump

Narendra Modi certainly conveys the impression that this perk is the best in his contract with the Indian Union: take off for foreign destinations like a Gujju on a Thomas Cook tour, farsan, thepla and chhoondo in tow, to posture with the high and mighty for the camera, the better to impress his mindless bhakts: a rubbernecking rube authorised by 31 per cent of India’s voters to strut and fret embarrassingly on the global stage. 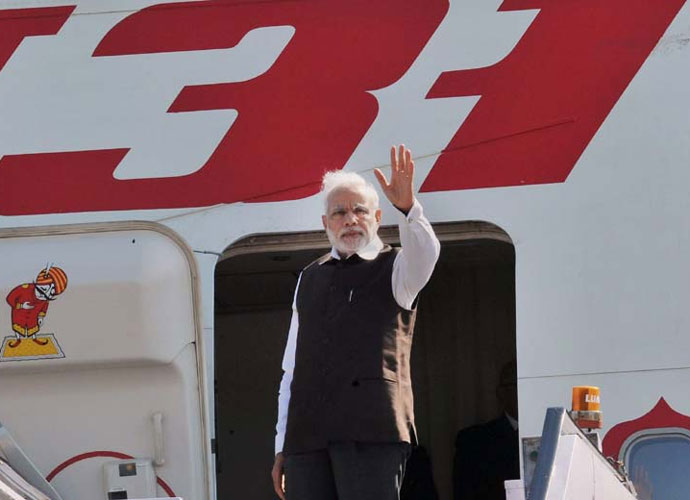 Narendra Modi takes off for foreign destinations like a Gujju on a Thomas Cook tour.

Modi's gaffe and hype methods are awkward in that they conflate his own insecure personality with the august office of prime minister.

But that’s the good news about Modi’s foreign-trip policy. When the hurly-burly’s done, his successors will have to put in long hours and summon all their diplomatic capital to restore some amount of credibility to India’s standing in the world.

Also read: Modi's US visit was a personal victory, but India's loss

Rajiv Gandhi, the first Indian prime minister to address a joint session of the US Congress, spoke in 1985 of an "India… in the front ranks of the nations in the world, in the service of mankind." He set a goal that was achieved, not in full measure but substantially, by subsequent governments.

In the ensuing three decades, India became a recognised player with a massive and growing economy to back its standing. Underlining that achievement was a firm conviction that an independent policy is the only surety of a place at the global table.

Though blind anti-Americanism has been a driving force in the conduct of foreign policy, in 2004, the newly-elected Manmohan Singh government embraced a US-led initiative called "Next Steps in Strategic Partnership", chalking out areas of cooperation: civilian nuclear and space programs, high technology and missile defense, with a view eventually to expand it to strategic matters, energy security and trade and commerce.

As it evolved, the partnership became operationalised on what came to be called the Indo-US civil nuclear agreement. For the Americans, it provided ground-floor entry to India’s prospective civilian nuclear power sector and also opened the door to heightened cooperation in bilateral trade and commerce with one of the world’s fastest growing economies.

On the Indian side, it was the realisation of a major foreign-policy goal: to be recognised as a responsible nuclear-weapons power after years in the NPT wilderness, a vindication of a half-century of idealism.

Also read: Why Modi is pushing India closer to US

Despite the euphoria of the time, the two sides got stuck on the details. The Indians balked, for example, at the nuclear liability clauses in the fine print, unwilling to go along with American demands without a solid quid pro quo. Another item in discussion was an agreement by India to adhere to the rules of the Nuclear Suppliers Group (NSG) without being admitted to membership.

In return, India secured from the US a commitment to push for India’s inclusion in the Missile Technology Control Regime (MTCR).

Even as Modi posed before television cameras and blathered on like a Chauncey Gardner, many thoughtful analysts were disappointed that his need for hype overcame prudence at the negotiating table.

Reports suggest that on the unresolved nuclear liability issue having to do with whether equipment suppliers can be sued in case of an accident, India consented to terms that are far more liberal than those obtaining in the US itself. And this would be fine if it could kick-start the stalled nuclear power generation sector.

But what is the quid pro quo Modi accepted: a pat on the head, a lavish White House reception and a speech to a joint session of Congress? At the very least, he could have put in his thumb and pulled out a plum before orchestrating a media campaign to project what a fantastic guy he is.

Back home, his spear chuckers mindlessly sought to portray the reiterated US support for India’s entry to MTCR as the biggest-ever achievement of any prime minister. That, as the erudite editor Manoj Joshi said, is "an astonishing claim. It is simply part of a deal for which we… agreed to adhere to NSG rules without being members. Among the items of exchange was a US commitment to get us into the technology regime."

Also read: Modi once told me he'll deliver a first-rate speech in English

Beyond the hype over MTCR, there were serious issues at stake: a discussion of new regime rules on climate change, cyber and regional security, defence. Informed sources say the Indian side was woefully underprepared. For example, in the matter of cyber security, the US led the discussion with a document called "Digital 2 Dozen," an enumeration of 24 obligations that countries that are part of the Trans Pacific Partnership must embrace.

These relate mainly to internet laws, cross-border data flows, intellectual property rights and other issues to facilitate digital trade and commerce (details here). India could have asked what the multilateral document has to do with bilateral ties.

Instead, reports suggest the Indian side got caught up in a discussion on "data localisation," a misbegotten effort to control the global flow of data. It is the kind of knee-jerk control issue that the Modi government has made its signature. In this specific case, any controls on data flow will adversely impact India’s only truly global information technology businesses that are seeking to grow out of outsourcing into product development.

The other issue on the table was the Defense Trade and Technology Initiative (DTTI), which dates back to 1995, when the Narasimha Rao government signed the Agreed Minute on Defence Relations.

The Modi government seems to have been fobbed off with four "pathfinder projects" involving "not-so-complex" technologies for co-production including "next generation hand-launched mini drones" with a range of ten kilometres "used by soldiers in the battlefield to keep tabs on enemy formations".

Seriously? In return for buying billions of dollars of weapons?

Similarly, on the logistics agreement, without a clearly articulated policy, it is clear that the US will use Indian bases while the chances of India needing US bases are marginal. Here, the trade-off seems to have been vague agreements under which the US will help India build an aircraft carrier.

In a predominantly asymmetric relationship, securing a meaningful quid pro quo is the best resort of the underdog. Under the present dispensation, it seems that Modi’s image and the BJP’s political prospects are the only criteria.

What an incredible joke this Modi visit has been! Obama will be gone in January 2017 but he and his team will still be laughing at the vainglorious redneck from India.

Post your comment
#Nuclear Suppliers Group, #Barack Obama, #Modi in America
The views and opinions expressed in this article are those of the authors and do not necessarily reflect the official policy or position of DailyO.in or the India Today Group. The writers are solely responsible for any claims arising out of the contents of this article.