Khadi is equating Modi with Gandhi - and it's absurd

The prime minister has no business to be your new brand ambassador and feature in your annual calendar.

We had Rs 2,000 notes with the missing face of Mahatma Gandhi. Now brace for the annual calendar and diary items released this year by the legendary, pre-Make In India Khadi Gram Udyog and, or the Khadi and Village Industries Commission (KVIC).

Edging out the Mahatma and his iconic spinning wheel - the very symbol of all things swadeshi and the root of Indian pride in the freedom struggle - is a gauche, fake-rural colour-schemed calendar art featuring Prime Minister Narendra Modi in the same sitting position as the Father of the Nation.

Yes, Modi has replaced Gandhi in the 2017 Khadi (KVIC) wall calendar, table diary items and other stationary goods, as shocked Indians and some elated bhakts break into collective confusion. 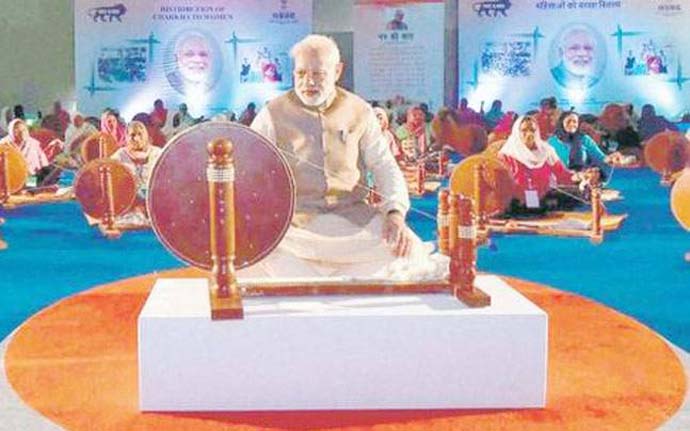 Also, replacing the old, see-through charkha is a new maroon-coloured opaque spinning wheel, which has PM Modi against it in the same sitting posture as Gandhi himself, striking a pose that's sure to rile the already jangled nerves of the nation. Is Modi the new Mahatma? Has he declared himself so? Is this the way he has done it?

Was happy to see Khadi & Gram Udyog finding a prominent place at the exhibitions too. pic.twitter.com/aocv5k6RH3

The picture of Mahatma Gandhi spinning the wheel isn't only a historic photograph, that features the much diminutive, very thin, bespectacled man in his trademark loin cloth; it is also a document of civil disobedience and that script of our long and protracted independence movement. Khadi was Gandhi's way of boycotting British clothes, which were made in the mills of Manchester during the colonial times, from cotton bought at criminally lowered prices from Indian farmers forced to grow the cash crop.

Khadi was a symbol of revolution - a non-violent one at that - and non-cooperation, when Gandhi called out to Indians to spin their own yarn and own cloth as an answer to British-made goods, and therefore make a huge symbolic dent on the legitimacy of the British Empire.

Gandhi at his charkha, therefore, signifies self-rule, liberty, equality and fraternity at best, and the spirit of Indian nationalism at its most exalted. At its most banal, it's now part of a historic memory that has been much tamed, much diminished in stature, but nevertheless equivalent to the decades of revolution, followed by the years of nation-building in the Nehruvian and Indira Gandhi years. 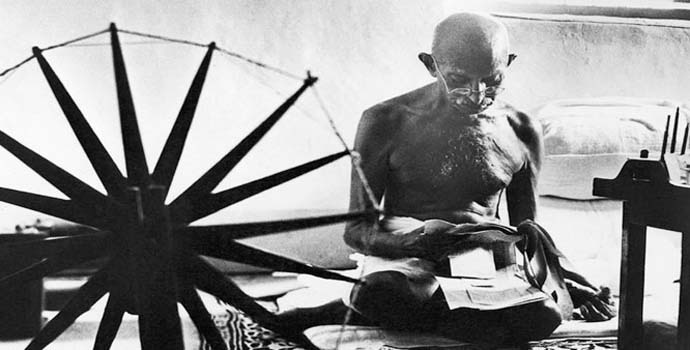 The iconic photograph of Gandhi at his spinning wheel that has been a symbol of all things Khadi. [File photo]

However, Modi's ascent has been synonymous with turning Khadi from a symbol of revolution and social change, to that of a postmodern fashion quotient, a new nativist cool that is both inward-looking and unintellectual. While PM Modi has promoted khadi with gusto, and he must be credited for doing that, the great context of Khadi's illustrious history has been wiped clean, and substituted by an uber-fashionableness that buries everything under a veneer of looking good.

Contrast Gandhi's emaciated frame - Winston Churchill called him a "half-naked fakir" in a derogatory reference, of course - with Modi's stout physique and his penchant for, as someone on Twitter has observed, "monogrammed suits, Bulgari glasses, Modavo watch, Mont Blanc pen", among other items of a luxurious, globalised, well-travelled (of course for the sake of India's "foreign policy") life. 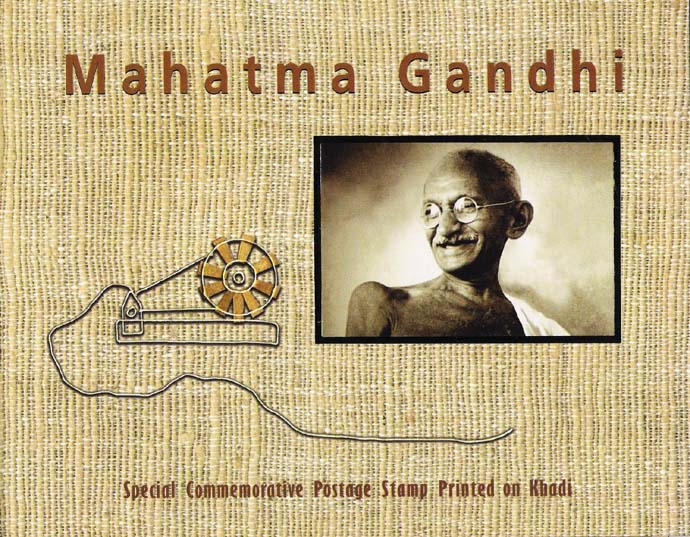 This new replugging of Khadi is, therefore, much in sync with Modi's attempt to rewrite the history of the twentieth century, colonise all the icons of freedom movement, particularly Gandhi, Nehru and Ambedkar, and eviscerate them from inside out. While the anathema to Jawaharlal Nehru is public and a permanent ammunition in Modi's arsenal of invectives, approaching the "Father of the Nation", Mahatma Gandhi, and the Dalit icon and writer of the Constitution, BR Ambedkar, are trickier domains in themselves.

That Modi wants to be what Gandhi, Nehru and Ambedkar have been for India for all these years is evident, but his political ambition is in stark contrast with the stunted anti-intellectualism, the technocratic exclusionism and blatant Hindutva sectarianism he displays at every given opportunity. The 2017 KVIC calendar with Modi on it has sparked outrage on social media.  [Photo: Twitter]

Edging out Gandhi in the iconic Khadi calendar is perhaps the least of Modi-engineered worries, though it has a mammoth symbolic consequence. This is particularly evident in the strong and staunch opposition the latest wall calendar has faced from KVIC employees themselves, with those at the organisation's Vile Parle headquarters planning to stage a "silent, soul-cleansing" protest, much in the spirit of Gandhi's own non-cooperation movement.

From gold suits to khadi, our PM is truly a man for all fabrics pic.twitter.com/S3W8fJbJgk

This is not to say that Khadi must be frozen in time and never updated iconographically, but the ideological perversion that Narendra Modi represents is the exact opposite spirit that Khadi and Gandhi embodied. Before there was "Make in India" and everything was about branding, Khadi was truly the first Indian brand to make a global mark. It promoted self-sustenance and skill-development as economic self-rule, and not at the expense of a liberal humanist education.

Modi's promotion of Khadi as an India success story is as much about trying to be part of the arc of history, but also to whitewash it entirely. While PM is perfectly right in helping the cause of Khadi by its personal participation, creating greater employment opportunities in the handloom and textiles sector by linking it with Khadi, or by infusing modern technology with the old art of Khadi weaving, the special fabric that "breathes", his putting his own picture on Khadi wall calendar, or KVIC's own misguided decision to do just that possibly to stay in the PM's good books, is disastrous.

It is sad that Modi thinks he can only appropriate history and not create it anew.

Post your comment
#Mahatma Gandhi, #Khadi, #Narendra Modi
The views and opinions expressed in this article are those of the authors and do not necessarily reflect the official policy or position of DailyO.in or the India Today Group. The writers are solely responsible for any claims arising out of the contents of this article.