Lying under oath is not a problem. It's lying we should be worried about.

Are Prime Minister Narendra Modi’s degrees genuine, fake or forged? With a little help from BJP’s incompetence at anything important, Delhi chief minister Arvind Kejriwal and associates have sown the seeds of doubt in a million minds. In the malleable ones, the seeds have sprouted and in those that do no critical thinking, they are the size of the tree under which Buddha received enlightenment. It no longer matters whether the PM’s degrees are genuine, now that fakery and facts have fornicated in what was a frivolous fracas to begin with.

The AAP leaders laid a trap for Modi to fall in and, to give them credit, wrote TRAP in huge neon-lit letters. Yet, BJP fell for it, in it, degrees and all.

At the outset, let me say degrees are no measure of a man’s worth. The charge here is that the prime minister of India may have lied on oath, or in an affidavit. What’s your problem, lying or lying under oath? I will be worried about lying, whether it was done under oath is unnecessary detail.

Politicians lie all the time. Would you prefer your politician to not lie on oath but lie otherwise 24 into 7? What if the oath was a lie and everything under it was true?

The more I read about how people are convinced the degrees are fake, the more convinced I am that they may well be genuine. In fact, I believed they would be fake until curious cretins came out to claim their crumbs. My reasons are the same as those laundered out by Ashutosh. 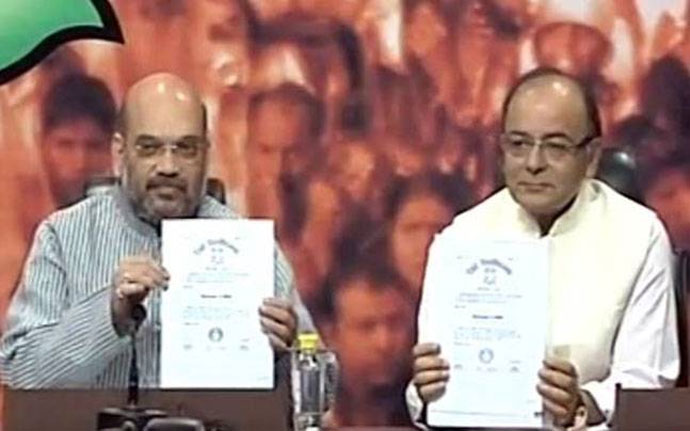 He is trained to ask questions, your answers go into a blackhole. He was a primetime anchor for Arnab’s sake. Perfect weapon in the hands of his wily chief, who used him to perfection. The BJP had the option of sending Sambit Patra, featherweight for featherweight, who could have posed with the degrees. Instead, BJP had two of its biggest leaders in a historic photograph that will haunt posterity.

But let us examine the reasons to doubt and confirm the authenticity:

1. Discrepancies. Where is the affidavit?

His name is Narendrakumar Damodardas in a BA mark sheet, while the degree says Narendra Damodardas Modi. In one marksheet, Modi is spelt Mody. In another, Damodardas becomes Damoderdas. This, according to those fishing, smells fishy. If you have any idea about how these marksheets were made in the years we are talking about, here is the biggest reason to believe these papers may well be genuine. If there are screwups, be sure they are good to go.

Also read: Modi's degrees don't matter as long as they are genuine

It’s only the millennials born in post-computerised age, wilfully ignorant idiots and Ashutosh, who do not know or acknowledge the terror called clerical error, especially in results season, when low-paid clerks would type hundreds of names on rickety typewriters with one hand while the other hand still had traces of maa ki daal from biwi ki tiffin, mixing surnames, parent’s names and roll numbers and random other figures because they couldn’t do better.

You had photos of women with sex clearly marked M. You had photos of monkeys, pets and Mahatma Gandhi while the name clearly said Suneeta Kumari. Well, you can still get Aadhar cards like that. But today the interface with the great government typo scheme has reduced because of computers. You don’t see Dilwale-Dulhania-Le-Jaayegne-Box-Office-type queue to get stuff corrected, invariably in the summer time, in front of the windows that had slippery grills because of all the grease from sweaty, expectant palms. These days, the queues are more Dilwale box office type.

The school examination board replaced the F in my dad’s name to a T. Yes, what the F! I had to go all the way to the board office 400km away to get that fixed. It took two train reservations, two days and a sleepless night at Hotel Raj. There was no IRCTC then. Little mercies.

It didn’t take an affidavit. I just told the bada babu that he screwed up. And that was corrected and duly stamped. That didn’t make my matriculation degree any worse. But matriculation certificate was/is too critical to ignore. I haven't bothered about marksheets after that. My pan card introduced an O in my father’s name. I haven’t got it corrected. I pay my taxes. The government is happily taking my money.

Hell, I got no affidavit to declare my documents are dandy. I got other documents to prove that the typo in one is a typo indeed. You do the affidavit deed if you change your name, like Ashutosh did by dropping his surname that could have called out his caste and could piss off voters of other castes. I welcome people filing affidavits to drop their caste signposts called surnames in our racist, casteist society. Ashutosh won on that count, even if he lost the vote count.

Most affidavits are white lies on white paper. You miss them in all the written stuff. Affidavits are sworn statements or tools to say what you can’t substantiate. If it were true, you wouldn’t need an affidavit. You can get a notary’s stamp on a stamped paper you bought for Rs 10 in about Rs 50. I hereby solemnly declare sounds more authentic, but it's no more authentic than I declare.

The marksheet says 1977, the degree 1978 and convocation happened in 1979. Well, there is nothing wrong with that. In fact, if all this happened in the same year in the '70s, or '80s, you should have a reason to doubt. I should have graduated in 1993 but the results came in 1995 and the degree in 1996. That was called a provisional degree to boot. I didn’t bother to attend the convocation and get the original. Because the duplicate is as bonafide as the original, even though Ashutosh attempted to raise the duplicate copy issue in one of his tweets. He didn't push it though. Small mercies.

It’s called “Entire Political Science”. If you look closely, it also says “We, the chancellor, the vice-chancellor and the members of the court of the Gujarat University". Now that's how an underconfident university would speak of itself. Go ask the blooming university what on terra firma that means. While you are at it, do ask them where you get the best khaman-dhokla on the campus. This is asking the wrong people the right question. Government papers use all kinds of jargon that mean little. Question the authorities who issued those papers. Just calling it suspicious doesn’t make it suspicious. It only makes you look lazy, while these members may be running a court inside a university.

4. Where are PM Modi’s classmates?

He was an external student. He said so. The degrees say so. He said he hadn’t seen the insides of any college. So clearly, he didn’t go to a class. You should suspect if somebody popped up to claim he had been Modi’s classmate. That there are no classmates makes me suspect he didn’t lie. He appeared in exams conducted by the university. A gifted-with-great-memory thing like Ashutosh may remember the people he met for the first and last time in examination centres. I don’t remember a single of those miserable creatures. Neither do I expect them to remember me. Or you. Or Ashutosh.

Well, what about her? Is she pregnant? Who’s responsible? I am tired of hearing she should be above suspicion. You also add that here Caesar himself is under suspicion. Well, it’s a tragedy. But could you please say whose suspicion? Who among the one billion plus Indians had this gnawing at their souls? Why did it surface only after press conferences started talking of the suspicion? I didn’t hear any of this before. Modi has been our PM for two years.

And second, the PM’s silence is complicating it all. I would rather have Modi break some conventions, instead of his own silence. Tomorrow, if some two-bit nitwit accuses the prime minister of wearing an imported underwear, should the prime minister break his silence on the elastic controversy because somebody is itching to stretch the swadeshi issue? I don’t think so. Sambit Patra should not call a press conference to hold up 7 RCR's dirty linen at 11 Ashoka Road to media flashbulbs.

Instead, Sambit Patra should ask Ashutosh to go check the washed linen hanging on the clothesline at 7 RCR. And if Ashutosh does go knock on 7RCR, the SPG should ask him to get the heck out of there. It’s none of his business to spoil a nice hosiery brand Ranjeet Rocky by tweeting about Ranjit Rocks. Even if Ranjit genuinely does.

Some op-ed writers are wondering: What if the PM lied about his degree! Can we trust him with other things? Well, you did. This country seems to have trusted him with the entire country. He seems to be betraying that trust, so that you lower your expectations before crunch time. It’s all happening the way it should.

You suspect he lied under oath. I am worried he did not. I can’t trust a politician who doesn’t lie under oath and does so otherwise. Why would he make an exception to the rule? Is he playing a trick on the unsuspecting masses?

Politicians have no qualms about organising murky defence deals, filling party and own coffers from your tax money, their children kill people for overtaking their Land Rovers, allowing drugs and mafia a free run, organise riots and compensate the victims, play caste against caste and encourage them to kill... all this happens in the hands of people who are under oath. Don’t expect an iota of honesty from them. Honest ones are the liars. The liars are the honest ones.

#Narendra Modi, #Arvind Kejriwal, #Fake Degree
The views and opinions expressed in this article are those of the authors and do not necessarily reflect the official policy or position of DailyO.in or the India Today Group. The writers are solely responsible for any claims arising out of the contents of this article.