High on the agenda is the International North South Transportation Corridor (INSTC), which will give India faster access to central Asia, Eurasia and Europe. Russian President Vladimir Putin and PM Modi will flag off a motor rally from St Petersburg on June 1 to showcase the INSTC.

Following Russia’s growing closeness to Pakistan and China, India needs to reboot its decades-old relationship with Moscow. Russia has been unhappy at India’s increasing proximity to the United States, especially in buying defence equipment at the cost of Russian suppliers. A recent example was the disqualification of a Russian tank-mounted howitzer gun for operation on the Line of Control (LoC) against Pakistan. The order for 100 howitzers valued at over Rs 4,300 crore instead went to an Indian- Korean joint venture two weeks ago. 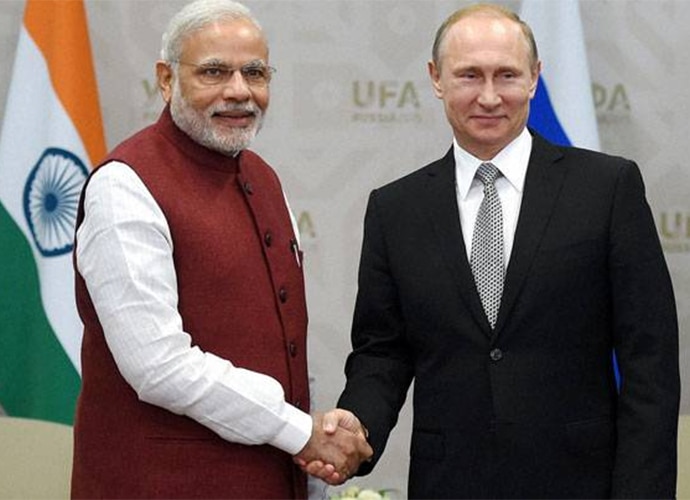 The Prime Minister’s Office (PMO) has been worried about a growing convergence of interests between Russia, China and Pakistan. Modi’s emphasis on fast-tracking INSTC is an attempt to wean Russia away from this OBOR-led triangle of convenience and back into India’s orbit. Iran will play a key role. INSTC passes through Iran’s Bandar Abbas port. It could later be linked to Iran’s Chabahar port where India is setting up major infrastructure projects.

INSTC has broader aims, well beyond Russian and Iranian geographies. It could connect India with five central Asian countries and sweep upwards to the Eurasian land mass. India’s trade with Kazakhstan, Turkmenistan and Uzbekistan could grow significantly. Crucially, the INSTC corridor could align with the Trans-Afghan rail line. This nascent project is being developed by India, Afghanistan, Uzbekistan and Iran. India is also exploring the possibility of building a 700-km railway line between Mazar-e-Sharif and Herat in Afghanistan. This would link central Asia with Chabahar port. India plans to use Chabahar in a manner similar to China’s deployment of infrastructure in Gwadar port in Balochistan which lies just 72 km east of Chabahar port. Chabahar has the advantage of not being roiled by an insurgency as in Gwadar.

The INSTC plan, which lay dormant for years, has acquired a new sense of urgency. Its advantages are compelling for Indian exports. Indian goods can go through St Petersburg to Western Europe, rather than using the long sea route. Transportation savings for Indian exporters could be as high as 40 per cent. Delivery times will be cut significantly. Later, by linking Chabahar port to INSTC, Indian shipments will benefit further. While INSTC opens up the whole European and Asian land mass to faster, cheaper Indian trade, its geopolitical advantages are equally potent.

It posits India as a major regional player. India is already using SAARC (minus Pakistan) for satellite links and infrastructure collaborations in South Asia. The BIMSTEC forum comprising India, Bangladesh, Myanmar, Sri Lanka, Thailand, Bhutan and Nepal is another regional hub to assert India’s role in the Indian Ocean and the Bay of Bengal.

INSTC will be a key part of this evolving strategy in a fast-changing world. Last week’s G7 and NATO summits in Italy and Belgium respectively highlighted the fissures between the US and its European allies. US President Donald Trump has laid down three new rules of engagement with NATO and Europe: NATO must focus on fighting terrorism rather than conventional wars; NATO members must raise their defence spending to at least 2 per cent of GDP (only five NATO nations do so currently); and NATO countries should not expect the US to automatically come to their aid when attacked as Article 5 of the NATO charter mandates.

One man listening to all of this last week would have been especially pleased: Vladimir Putin, who regards NATO as an existential threat. Russia was expelled from the G8 following its invasion of eastern Ukraine.

For India, Trump is a conundrum. On the one hand, he said in Saudi Arabia last week that India was a victim of terror and that no country should be allowed to provide terrorists a safe haven — a clear allusion to Pakistan. But, Trump’s visceral anti-Iran stand is a complication. Under relentless attack by the biased US media for his ties with Russia, Trump has been forced to pivot against Moscow to prove the opposite. That too is a complication for Indian policymakers who seek an US-India-Russia-Iran alliance against an aggressive China and its vendor state Pakistan.

Modi’s St Petersburg visit today for the 18th India-Russian Annual Summit and the St Petersburg International Economic Forum, where he is the guest of honour, will be closely watched. Putin, like Trump, is a transactional leader. Both see value in India as the world’s second largest market as well as a counterweight to rising China.

A week after his St Petersburg visit, Modi will run into Pakistani Prime Minister Nawaz Sharif at the Shanghai Cooperation Organisation (SCO) Summit in Astana, Kazakhstan, on June 8-9. Putin will be there too. So will Chinese President Xi Jinping. Modi will find it interesting to brief him on India’s plans for the INSTC corridor which, like OBOR, will rewrite the rules of the game in Asia.

Also read: A strong relationship with Russia is essential for India's foreign policy

#Vladimir Putin, #Russia, #Pakistan, #OBOR
The views and opinions expressed in this article are those of the authors and do not necessarily reflect the official policy or position of DailyO.in or the India Today Group. The writers are solely responsible for any claims arising out of the contents of this article.