Does Rahul Gandhi qualify as a real leader?

Rahul Gandhi walked alone, even as his party felt dejected and hopeless. And he didn't stop until his party workers and people were inspired to join him.

Let us see if Congress President Rahul Gandhi qualifies to be a leader.

Born into a high castle with a silver spoon, has the prince, as it were, been able to touch the people's heart? Has he been able to gather, mobilise, lead? Rahul joined formal politics in 2004 when he contested and won from Amethi on a Congress ticket with over 200,000 votes (66 per cent vote share). The so-called 'heir to the throne' slogged for 14 years before he could become the party president in December 2018. The Congress party-led UPA coalition governed from 2004 to 2014 — but Rahul stayed away from power.

In these ten-fourteen years, he journeyed across the length and breadth of India to know its people. From dodgy potholes to hot deserts, Rahul has traversed the difficult terrain on foot, by local trains, budget airlines, spent nights in villages, eating with locals, spending time with them, met daily wage labourers in cities, the sanitation workers, rickshaw drivers and so on. He came out of his comfort zone and plunged into people's movements, in solidarity and in sheer joy and the excitement of being a part of something great.

In 2008, he visited the Niyamgiri Hills in Odisha where tribals were protesting against the Vedanta mining work.

"For the tribals of Kalahandi, there is a soldier in Delhi named Rahul Gandhi," he told them. In 2010 after the Vedanta project was rejected by the UPA government at the Centre, he went back to them to celebrate their victory. "This decision was not anti-development, you have saved Niyamgiri. My work has only began, remember we are there to always listen to your voices," he said.

In 2011, he dodged the police, got on a bike and reached the high tension area of Bhatta and Parsaul villages in Uttar Pradesh, where farmers had clashed with the police over their agitation against the state government's land acquisition. He was the first politician to reach there against all advisories. Detractors called it a political stunt — but to many, it seemed like the 'Prince' really wanted to know more about why the farmers were pained.

In 2015, India saw one of its first student protests against the Narendra Modi government's attempt to capture institutions by placing on top mediocre people with certain political leanings. Actor and BJP member Gajendra Chauhan was appointed as the Chairman of the prestigious FTII, Pune. The FTII students registered a huge protest against the appointment of a person who had no academic or cinematic excellence, and whom students couldn't look up to for inspiration or learning. 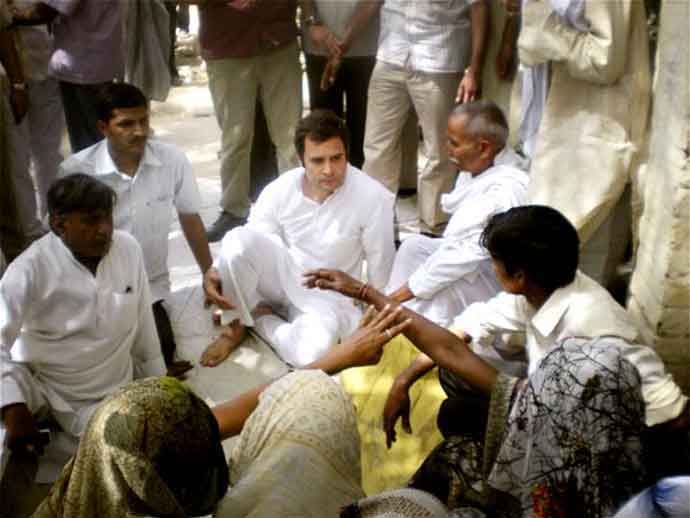 Rahul Gandhi in Bhatta and Parsaul villages in UP where farmers had clashed with police over the state government's land acquisition. (Photo: PTI)

Rahul Gandhi met the students, extended his support — and lashed out at the Sangh Parivar and the Narendra Modi-led BJP government for "systematically promoting mediocrity" in India's academic institutions. FTII Student Association President Harishankar Nachimuthu had earlier requested MPs across party lines to extend their support to the protest, and to Rahul in particular, he specifically requested to intervene in the 'same manner' as he had done in the issue of the ban on the Ambedkar Periyar Study Circle (APSC) at IIT Madras.

Reportedly, the May 2015 ban on the Dalit students' body, APSC, by IIT Madras was revoked in June 2015 — after Rahul Gandhi kicked up a Twitter storm attacking the NDA government.

In February 2016, Rahul sat on a hunger strike along with students of Hyderabad Central University in memory of PhD scholar Rohith Vemula, who committed suicide under various kinds of pressure from the University administration. He visited HCU twice during this period — and firmly extended his support to Rohith's mother in her fight for justice. Addressing the Dalit Swabhiman Sabha, Rahul said, "Rohith Vemula did not commit suicide, rather he was murdered by the Government of India," — a statement which saw BJP's sharp reaction, demanding an apology from him.

Within days of visiting the HCU, he joined another student protest — this time in JNU, against the arrest of Kanhaiya Kumar and others for allegedly raising anti-national slogans. This was perhaps one of the biggest risks Rahul has taken in his career as he was seen siding with "seditious" students who had organised a memorial for convicted 'terrorist' Afzal Guru, thereby giving the BJP ammunition to label Congress as "anti-national".

But bad optics didn't deter him from being part of something he believed in.

At the spontaneous midnight protest, amidst a roaring crowd, he spoke from his heart. He mentioned Adolf Hitler and reminded the students that the suppression of freedom of speech is the first sign of impending fascism. 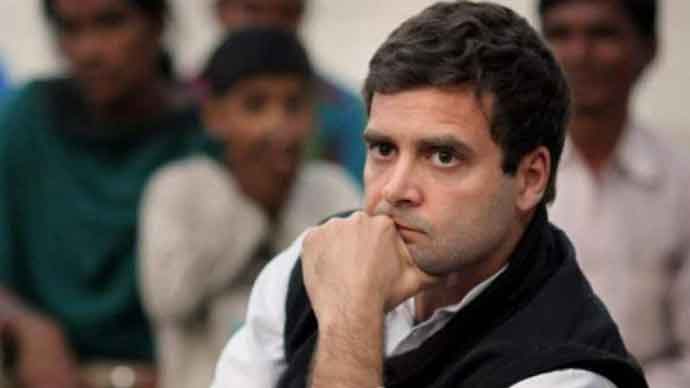 Hyderabad University to JNU: Challenging optics didn't deter Rahul from being part of something he truly believed in. (Photo: PTI)

In a bold statement, he said, "A youngster expressed himself and the government says he is anti-national. The most anti-national are those who are suppressing the voice of this institution." Without mincing words, he hit out directly at the BJP and RSS, "Don't let them bully you, inside they are scared, they are terrified of weak people getting a voice, they are terrified one day you might turn around and ask them questions, and that is what you must do, question them," said Gandhi, to great applause.

The BJP government at the Centre has since then run a smear campaign against JNU, its students, and anybody who supported them. Words like "Tukde Tukde Gang" have become part of regular media debates. Three years since then, the Congress social media cell released a promotional video featuring the "Azadi" song from the JNU protests — along with glimpses of Rahul's participation in it. A clear sign that Rahul has not washed his hands of something he stood up for.

In June 2017, there was a massive agitation by farmers in Mandsaur, Madhya Pradesh, demanding loan waiver and higher prices for their produce. Clashes with the police erupted and five protestors were killed, reportedly in police firing. Rahul Gandhi rushed to meet the farmers but was detained at Rajasthan-MP border. "I just want to meet the farmers, but if your ideology don't match with the RSS you are not allowed to enter MP. Mr Modi has waived loans of big corporate but he gives only bullets to farmers," Rahul said, making big headlines and stunning imagery. He went back to MP in June 2018 to commemorate the farmers' protests.

In December 2018, the Congress won the assembly elections in MP, on the main poll plank of farm loan waiver, agri-reforms and welfare. Here is a case study on how this man relentlessly walked the path alone — even when his party workers were fatigued and depressed — till he gained the people's trust and votes.

Rahul has been detained and arrested by the police for joining or attempting to join people's protests again and again. In November 2016, he was detained thrice in two days, when he tried to meet the family of martyr Ram Kishan Grewal who committed suicide over One Rank One Pension campaign.

Rahul Gandhi & senior leaders being detained by Police when they tried to meet family of martyr Ram Kishan Grewal. pic.twitter.com/dQNFPVe9fm

Last year, he was detained for protesting in front of the CBI headquarters against the Centre's midnight coup by which it removed both the warring CBI chiefs. Media and the BJP leaders once again dismissed all his actions as political stunts and immature behaviour — but somewhere, Rahul had touched the masses. Not only the rural illiterate masses but the urban middle class in the capital too.

In early 2018, two cases of rape shook the nation's conscience. The rape of a woman in Unnao, UP and an eight-year-old Kashmiri tribal girl's rape and murder in Kathua. For a few days, Rahul apparently expressed concern over the Unnao victim, asking questions to the government while staying silent over the Kathua case. This damaged his image and affirmed the 'soft Hindutva' approach the Congress is said to be taking.

To undo the damage, Rahul was required to not just speak of the Kathua victim but do something bigger. Rahul Gandhi rushed to meet protesting farmers at Mandsaur but he was detained at Rajasthan-MP border. (Photo: PTI)

On April 12, he suddenly announced that he would hold a midnight candlelight vigil at India Gate for both the Kathua and Unnao victims, and requested everybody to join him. Reportedly, party leaders had apprehensions over the vigil, fearing a low turnout embarrassing the party, but Rahul didn't care. "I don't want to make it a political issue," Rahul is learnt to have told Congress leaders, "We need to reflect the mood of the country. A tweet here or there is simply not enough," he added.

Thousands of ordinary people turned up at the vigil. Television media ran live footages till late at night. Rahul Gandhi had truly inspired his party workers, leaders, a section of the masses, and captured the imagination of the entire nation.

Here is a leader who started a movement and led it from the front.

Five years, hundreds of protests, agitations and movements, many took to the streets, many voices asked questions, many sought justice — democracy has never been more alive and kicking in this nation. Through these five years, we woke up every day to breaking news that told us fascism is approaching, and democracy is fiercely fighting back. Rahul Gandhi stood with the people at the heart of this fight. Narendra Modi, the reputedly poor chaiwala, remained silent and off-limits. He has been traveling the world, meeting his rich and influential friends. He couldn't hear the people's cries, couldn't feel the people's pain, couldn't care less for the people apparently, for he had bigger things to achieve.

He has to safeguard his image as a "tall leader".

Rahul Gandhi walked alone even as his party felt dejected and hopeless — and he didn't stop until his party workers and people were inspired to join him. By December 2018, he had won three states. How many seats he can win in the 2019 General Elections, we would know in few months.

But even if he doesn't win many, even if the BJP comes back with resounding votes, Modi will still be a ruler, not a people's leader.

#Democracy, #2019 Lok Sabha polls, #Narendra Modi, #Rahul Gandhi
The views and opinions expressed in this article are those of the authors and do not necessarily reflect the official policy or position of DailyO.in or the India Today Group. The writers are solely responsible for any claims arising out of the contents of this article.