Development has taken a back seat while the PM is busy with photo shoots.

Prime Minister Narendra Modi has added yet another feather to his crown. Modi’s wax figure will now be exhibited at Madame Tussauds museums in Bangkok, Hong Kong and Singapore. The development comes at a time when Modi has been trying to establish himself as an international statesman through his foreign trips. He has also made efforts to directly engage and establish a personal rapport with other world leaders.

Also read: [Hilarious memes] Achhe din is when Modi meets Modi and all that wax However, Twitter users couldn’t prevent themselves from taking jibes at Modi as soon as his photographs with his wax statue went public. While some criticised Madame Tussauds for doing what they considered a bad job, for others the photographs were reflective of Modi’s deep-rooted self-obsession. Twitter users couldn’t prevent themselves from taking jibes at Modi.

But Modi’s self-obsession isn’t a new-found phenomenon. Here we take a look at few instances when Modi left the world speechless with his self-centeredness.

Also read - Modi the wax dummy: What you see is what you get

As chief minister of Gujarat, Modi would often say, "Mitron, mere Gujarat mein (Friends, in my Gujarat) as opposed to "Mitron, humare Gujarat mein (Friends, in our Gujarat)." The usage of the word "my" instead of "our" exhibited the level of ownership which Modi sought to exercise in his home state. He saw no difference between his personal identity and that of his state.

More importantly, Modi constantly refers to himself as "Modi" in his speeches. To write a resume in third person is one thing but when a person starts talking in such a manner, he ends up indulging in self-aggrandizement. It was all about Modi, not the candidates.

While campaigning for the 2014 general elections, Modi made a vote appeal on radio. The said vote appeal was such that it sought to dilute India’s parliamentary system of democracy. When India votes in a general election, it does not vote merely for electing the prime minister. As many as 543 parliamentary constituencies elect their representatives to frame laws and represent them in the Union Parliament.

But Modi’s vote appeal was all about himself. "Aaj khud apne liye vote maang raha hoon.. Meri appeal hai har gali aur kuche se, aap ka vote seedhe, seedhe mujhe milega (Today, I am seeking a vote for myself. I want to tell all the voters that your vote will reach me directly)," Modi said.

Modi fought Lok Sabha elections from Varanasi and Vadodara. He wasn’t the BJP’s candidate from the remaining 541 constituencies. Yet he decided to turn the electoral battle in all the constituencies as one concerning him thereby once again revealing his totalitarian nature.

It was all about Modi, not the candidates from the different seats and not even his party, the BJP. Most importantly, it wasn’t even about the developmental issues in different constituencies but Modi himself.

While Modi’s spin doctors are perennially on the lookout for increasing Modi’s media visiblity, Modi himself hardly gives any interviews to the domestic media. Except for a few friendly interviews with the likes of Rajat Sharma, Modi has been spotted getting selfies clicked with a few journalists.

But last year when Time Magazine decided to put Modi on its cover, he spent an unusually long time getting his portraits clicked. "I had a full hour with him which is very unusual because most of the time I only have ten minutes for a portrait session," said Peter Hapak, the photographer who shot Modi’s cover image.

As per Hapak’s own admission, the time he spent with Modi was "unusual" and that others would not give him more than ten minutes. The fact that Modi spent more than an hour with a photographer just to get the perfect portrait proves how conscious he is about his image. 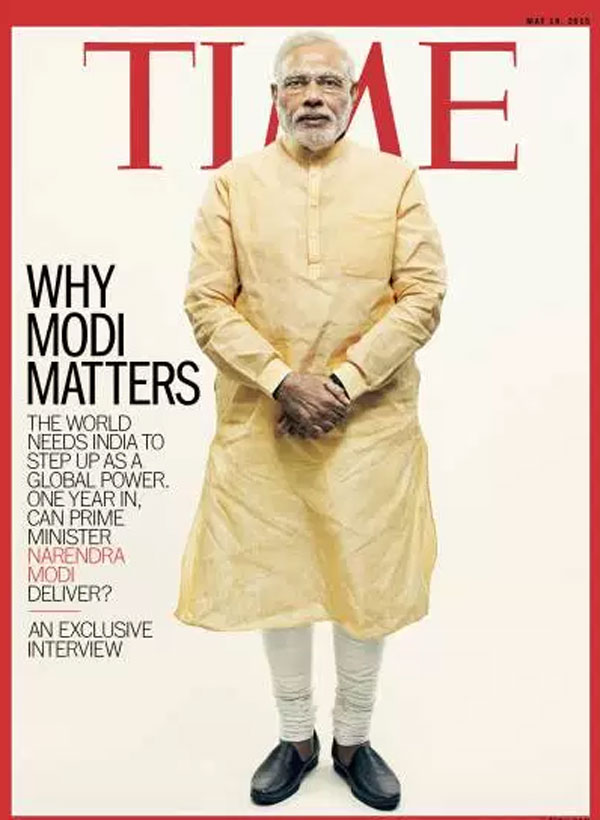 Modi spent an unusually long time getting this portrait clicked.

He doesn’t wish to speak to the national media and answer tough questions about governance. He maintains an arm’s length from them. But when it comes to establishing himself as an international icon, he leaves no stone unturned. All the work at Prime Minister’s Office (PMO) can take a backseat till Modi is satisfied with his photoshoot.

He is so excited to get clicked that he doesn’t even mind shoving people aside who are blocking him in the frame. That’s precisely why when Mark Zuckerberg came in the way of Modi and cameras at Facebook’s Townhall event last September, Modi did not shy away from pushing him aside. The video footage of the incident went viral and brought Modi nothing but embarrassment.

Last year, during US President Barack Obama’s visit to India in January, Modi did the unthinkable. He wore a suit with his name inscribed all over it. "Narendra Damodardas Modi" was what it said. Such a suit had been earlier worn by Egyptian President Hosni Mubarak. 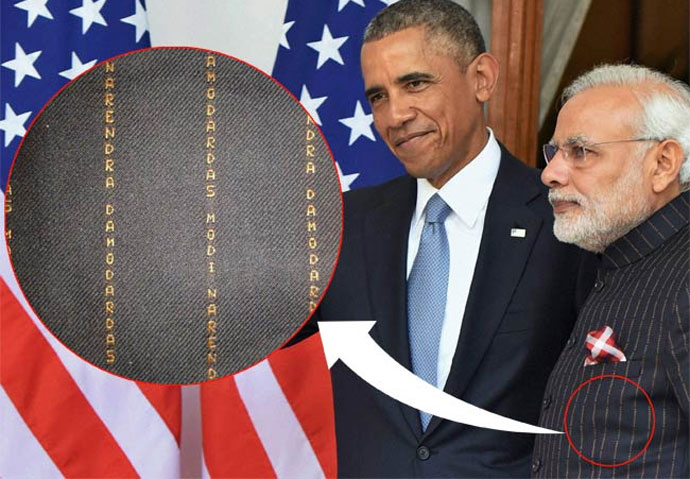 But think of it this way. Your boss at the office turns up at the workplace wearing a suit with his name written all over it. What will be your reaction? The boss will certainly become the butt of all jokes. And so did Modi.

Being the leader of the world’s largest democracy, he should have conducted himself with grace. Had Modi concentrated on governance instead of his attire by reining in extremist elements within his own party, he wouldn’t have given US President Barack Obama an opportunity to caution India against religious intolerance.

Also read: Why India must not stop criticising Modi and his politics

It’s been two years since Modi sarkar came to power. Fifteen years ago Modi became chief minister of Gujarat. And he has been involved in politics since several decades. It is unfortunate that even after having spent such a long innings in public life, he doesn’t realise the importance of simplicity and humility.

If one calls himself a "pradhan sevak" then he should behave like one instead of a self-seeking politician that Modi has become.

Post your comment
#Time magazine, #Mark Zuckerberg, #Modi suit, #Narendra Modi
The views and opinions expressed in this article are those of the authors and do not necessarily reflect the official policy or position of DailyO.in or the India Today Group. The writers are solely responsible for any claims arising out of the contents of this article.