The PM's achievements might not measure up to the hype of 'achhe din' enunciated two years ago, but they are substantial.

As the Narendra Modi government gears up to celebrate its second anniversary on May 26, it's time to undertake an assessment of how it has fared so far. Also, whether the plank on which PM Modi was elected and the promises he made have been realised or not.

Most people think that the promise of "acche din" has not been met. The level of energy and enthusiasm that was unleashed by PM Modi seems to have been all but dissipated. Although it will not be correct to assert that a sense of gloom and despair has enveloped, it would be accurate to declare that the level of confidence has come down.

So has Modi failed? This would be a harsh and sweeping assessment. His critics cite the losses in Delhi and Bihar to say that the Modi magic has evaporated. And his supporters remind of the BJP's unprecedented Assam victory just a couple of days back.

While making a balanced valuation of the performance of the Modi government, it needs to be kept in mind that human tendency is to focus on the perceived failures and not give adequate credit for achievements. It also must be realised that expectations from Modi at the time he assumed power were sky-high and unrealistic.

People wanted immediate results. No leader with the best of intentions could have met these expectations, considering the fractious polity, complexity and magnitude of challenges confronting the nation. It was also unanticipated that the country would be hit by two successive years of severe drought.

Modi won the 2014 Lok Sabha elections on the plank of development and good governance. It will be instructive to see how he has fared on these two fronts. On the theme of development, although there have been a few shortcomings, the government can take pride in the fact that it has taken several bold decisions in the economic field, results of which are already visible, though faintly.

Although overall inflation has been arrested, prices of food items have soared. This is one of the biggest shortcomings of the government. Another is its failure to create jobs. Macro indicators like increasing FDI, large inward remittances, high level of GDP growth don't mean much unless they are translated into lower prices of essential commodities and more jobs for the youth. 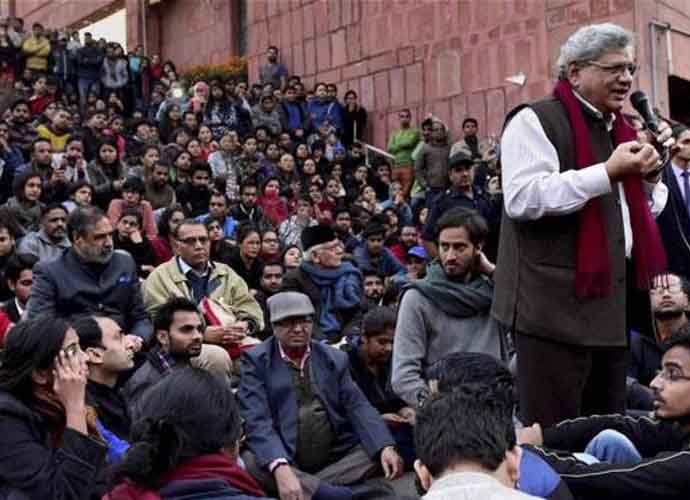 Our exports have been declining constantly for the past 20 months because of contracting international demand. To add to the government's woe is its lack of adequate numbers in the Rajya Sabha. This has hobbled the government's reform drive as it has not been able to push through crucial reforms like GST and labour.

On the positive side, however, the government has taken advantage of the ebbing energy prices and simultaneously moved to hike its target of renewable energy to 175GW over the next ten years.

Significant progress has also been registered in the vital areas of railways, roads, power and infrastructure. These need to be extended to other sectors such as water, agriculture, healthcare and banking.

In the area of governance, the government has found itself on a slippery wicket because of controversies like love jihad, ghar wapsi, beef ban, etc. The government, on these issues, seems to have allowed the fringe elements to hold the nation to ransom.

This has encouraged the Opposition to regroup under the banner of "rising intolerance" and "award wapsi", and paint the government in an unflattering light. The government has also not been able to effectively manage the media and educational institutions like Jawaharlal Nehru University and Hyderabad University.

What the Modi sarkar can take solace from is the fact that there has been not a single case of consequential financial impropriety facing the government in the past two years.

It's, however, in the formulation and implementation of foreign policy that Modi has scored high. Some analysts tend to term his initiatives in this area as a failure by referring to India's flip-flops vis-à-vis Pakistan, China and Nepal. It needs to be recognised that fractious relations with Pakistan and China have existed for a long time.

In fact, several initiatives by the Modi government have put us in a stronger position, although they might not have necessarily helped in improving bilateral relations. Also, Modi has used India's soft power like yoga, culture and philosophy to good effect, besides actively and effectively reaching out to the Indian diaspora to make them active partners in India's progress and development.

Modi's achievements have been substantial, although they might not measure up to the hype and hoopla of "achhe din" enunciated two years ago. In the coming year, he will have to ensure that macro policies adopted so far get implemented efficaciously and their impact is felt by the people.

On the governance side, it will be necessary to rein in the extremists who tend to take the focus away from development.

While embarking with renewed determination to accomplish the tasks ahead, Modi and his team can be reasonably satisfied with their achievements. As for the coming year, it will be crucial in shaping his report card that the prime minister will present to the people in 2019.

Post your comment
#Economy, #JNU, #Make in India, #Narendra Modi
The views and opinions expressed in this article are those of the authors and do not necessarily reflect the official policy or position of DailyO.in or the India Today Group. The writers are solely responsible for any claims arising out of the contents of this article.