Both have had very different lives, yet full of struggle, both found powerful critics pitted against them, and yet, both fought like there was no tomorrow.

Victory brought them together.

Nobody knows what the political equation is between them — or if something is cooking between them. Or how this dynamic would shape up in the future.

But there are quite a few similarities in the campaign trails of Prime Minister Narendra Damodardas Modi and the new Andhra Pradesh Chief Minister Yeduguri Sandinti Jagan Mohan Reddy. Jab They Met: The two leaders started life differently. But they have a major experience in common. (Photo: YSR Congress/Twitter)

Modi, who has been a source of ire to the Indian intelligentsia, has oft been accused over the massacre of civilians in Gujarat in the aftermath of the Godhra carnage of 2002. He had to swallow humiliation for over a decade, for even the popular mandate he secured through democratic means did not matter to his critics. And the number has only multiplied over the years.

Many rallied behind him when he became Prime Minister with 282 seats in 2014, without the need for partners in the National Democratic Alliance (NDA).

But, sooner rather than later, his critics reassembled, often with greater force.

Modi was frequently dubbed negative by many major newspapers, several TV channels, a myriad of websites run by highly respected journalists, opinion writers and columnists, all cursing him with the proverbial bell, book and candle, along with hundreds of social media groups, and, of course, several political parties.

Reddy too faced similar hostility from the media in undivided Andhra Pradesh, which continues to have its stranglehold there even after the bifurcation of the state. Jagan has been the butt of ridicule for a large section of the media, which brazenly blew the trumpet of the Telugu Desam Party (TDP), thanks to the many vicissitudes of fortune across his political career, including the death of his father, YS Rajasekhara Reddy, the following case and incarceration, the release and electoral victory in by-polls and a defeat in General Elections.

Jagan has been virtually hounded by much of the media. Facing hostility, Jagan largely used to turn to the English media and English channels to put across his point of view. Even there, local editions were not too kind for a long time.

Neither Modi, nor Jagan addressed a full-fledged press conference in the last five years.

Modi's tenure has been a mixed bag — while some were monumental mistakes, a few others were serious blunders that were, indeed, acts of commission. But the overdose of denigration led to making Modi so immune to criticism that he completely ignored any negative voices. Reams of newspapers and gigabytes of video and text content that poured scorn on Modi just went down the drain.

The huge machinery of electronic and social media he established and groomed into the campaign was able to challenge the traditional media by creating a very large user base and drawing millions of unique visitors — thus 'eyeballs'. The content generated by the 'pro-Modi media' has a large number of consumers. The rhetoric has become narrative with high amplitude and people seem to have preferred these ideas to the constant criticism. Rafale misfired, for instance, more because of the vilification campaign, in my view, around the Prime Minister.

Reddy too has encouraged multiple groups on behalf of the YSR Congress’s state unit, district units, individual aspirants and sympathisers to take on the vilification campaign unleashed against him. The multiple units took on the anti-Jagan campaign and tackled it to the ground, though in an extremely unorganised manner. Aside from this, Jagan’s own TV channel and newspaper projected him as a hero. 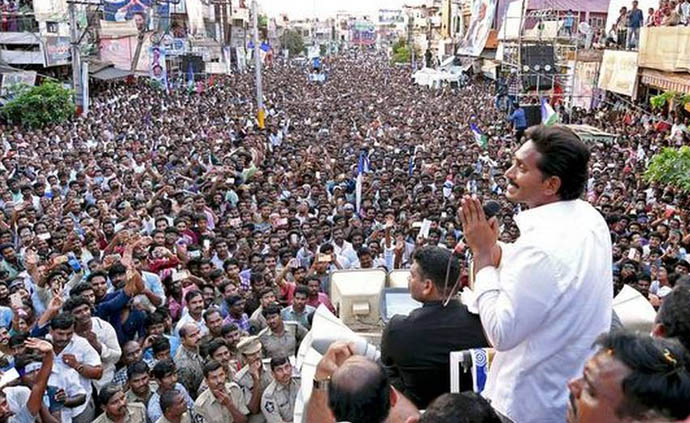 One with the Masses: Jagan Mohan is mostly pictured with huge crowds in photos released by his party. (Photo: YSR Congress handout)

However, considering their share in the market stakes, they couldn’t in fact match the anti-Jagan media.

Modi chose the ‘Mann ki Baat’ radio address to communicate directly with the people — he has done 53 episodes, beginning with the first on October 3, 2014, to the last one just before the elections on February 24, 2019. Inviting ideas from people, through multiple modes like Interactive Voice Recording System (IVRS), or messages and missed calls were moves that gave the masses a sense of inclusiveness.

Reddy, stoking rebellion against the Congress leadership, had launched Odarpu Yatra (a condolence tour to meet people who died or committed suicide on hearing the news of the death of his father, YS Rajasekhara Reddy) in 2009. He proved to be a runaway hit with mass-contact programmes. He went on doing one tour to the other after that, except when he was in prison.

And, as a final blow, Jagan took to padyatra, the most trusted weapon that enthroned his dad too, for mass contact.

He commenced his march on November 6, 2017, and concluded it on January 10, 2019 — walking 3,648 km and meeting over two crore people personally. He had to attend court every Friday which he did without fail.

During the padayatra, there was also an attempt on his life with a knife-bearing assailant in Visakhapatnam Airport. The TDP government began to slight the incident and launched a derisive campaign against Jagan, attempting to portray the matter as if he had organised it himself. But this campaign couldn’t cut much ice with electors.

In the case of Prime Minister Modi, one of the key allies of the NDA, the TDP, walked out and its boss N Chandrababu Naidu tried to become the adhesive to glue the opposition parties together with the highest common factor (HCF) being an anti-Modi campaign. Double Role: Chandrababu Naidu played a role in both Andhra politics and tried at national politics too. (Photo: ANI)

But Modi remained undeterred. Naidu was on a mission to unseat Modi from power, by sewing up the challengers' coalition.

The Janata Dal (United) of Nitish Kumar and Uddhav Thackeray’s Shiv Sena often became thorns in the flesh for the Prime Minister. It has always been a marriage of convenience between them. Many a time, the political relationship of the BJP with those two parties reached breaking point but all partners stayed on for reasons best known to them.

When it comes to Jagan, there is no political party that showed interest in joining hands with the YSR Congress. Even though there were reports that some parties — speculation was rife that BJP too tried for an alliance — bargained a deal, Jagan refused to budge and decided to go it alone. He was firm on this stand, just to prove a point — that it was his individual strength that got him to the seat of power and there were no other contributors to claim credit for his victory.

You always find Modi alone in an interesting photograph or a video clip as his media team tries to focus only on him. In complete contrast, Andhra Pradesh CM YS has always been photographed amid mammoth crowds.

From being an archetypal nowhere man to an active karyakarta of the Rashtriya Swayamsevak Sangh (RSS), the once-self-effacing Narendra Modi, who claims to be a chaiwala in his early life, scaled the dizziest possible heights many in India cannot even think of. Sheer dint of hard work, being impervious to bitterest criticism, having guts of iron and a steel resolve levitated him to where he is today. 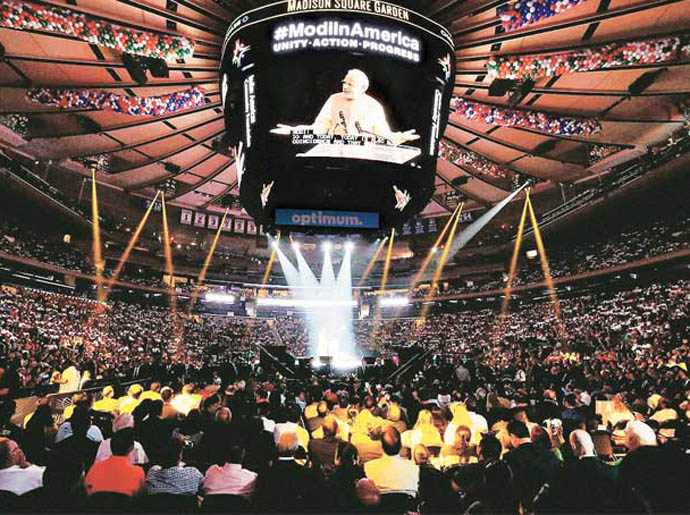 Now, it's all about him: Narendra Modi rose to great heights, after being vilified as a 'chaiwala'. (Photo: Reuters)

However, Reddy, who won as a member of Lok Sabha from Kadapa, when his father YS Rajasekhara Reddy, as chief minister, led the Congress in the state during the simultaneous election to the Assembly and the Parliament, stands in contrast here too.

Jagan was an MP and the privileged son of a powerful CM, in his early years. He was also an established businessman by the time he started his political peregrination — but, in tough times, he fell to a nadir and then had to begin the journey all over again.

Also read: Lok Sabha Polls: Why we think Jaganmohan Reddy will be a game changer in May 2019

Post your comment
#2019 general elections, #YSR Congress, #Ys jagan mohan reddy, #Narendra Modi
The views and opinions expressed in this article are those of the authors and do not necessarily reflect the official policy or position of DailyO.in or the India Today Group. The writers are solely responsible for any claims arising out of the contents of this article.