Among the heaps of documents released by Prime Minister Narendra Modi on Subhas Bose’s birth anniversary lies one letter testifying to the bitterness that certain Netaji kin felt toward Jawaharlal Nehru.

"My contention is that Sri Nehru is suppressing the fact of Netaji being alive to the Indian public for his personal ends. He had always been an enemy of Netaji," charged a nephew of Bose in his appearance before the Shah Nawaz Committee on 9 June 1956.

Classified files relating to the Shah Nawaz Committee are seeing the light of the day for the first time ever since they were created in the Nehruvian era.

The files contain detailed account of various eyewitnesses to the reported death of Bose in Taiwan in 1945.

These accounts are riddled with discrepancies and contradictions – something that has been discussed over the years. But so far, people had access to only certain cherry-picked portions of those testimonies put in his 1956 report by Shah Nawaz Khan, a would-be minister in Nehru’s government.

In his testimony before the committee, Dwijendra Nath Bose, son of Subhas’s eldest brother Sudhir, can be seen making a scathing attack on Nehru.

A freedom fighter in his own right, Dwijendra Nath along with his brother Arabinda and first cousins Sisir and Ila had played a crucial part in their uncle’s dramatic escape from Kolkata in 1941. He was subsequently arrested and subjected to torture, which left him partially crippled for the rest of his life.

The declassified Shah Nawaz Committee file shows Dwijendra alleging that Nehru "betrayed Netaji after having promised to help him after Netaji had resigned from the Congress Presidentship in 1939".

Also read: Netaji's death certificate as real as his death

Dwijen adds that Nehru made several outrageous remarks against Bose in public meetings, which were covered by newspapers.

After Shah Nawaz asked him to send relevant details, Dwijen wrote the following letter to him on 5 July 1956: 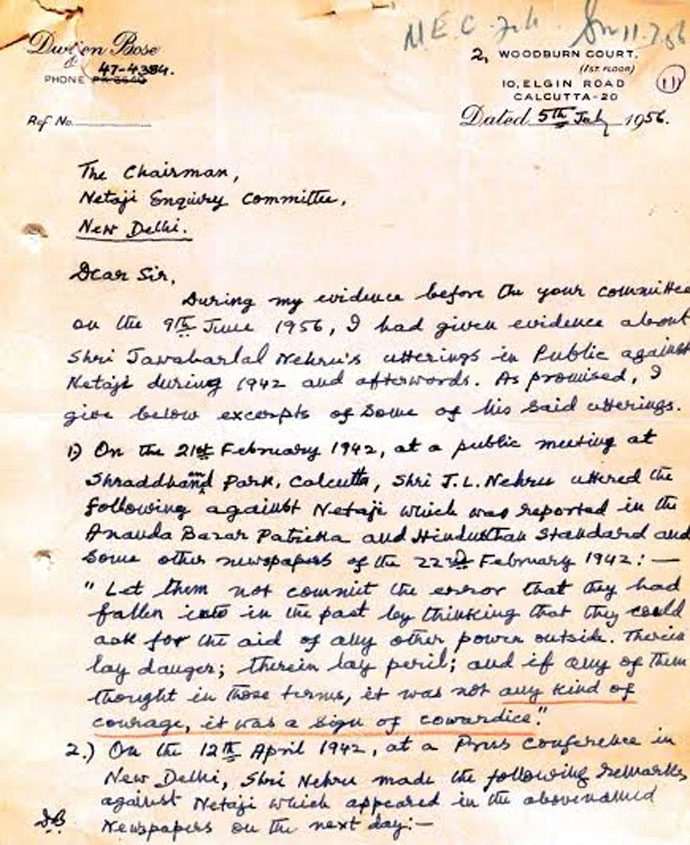 The letter opened with the following charge:

"On the 21st February 1942, at a public meeting at Shradhanand Park, Calcutta, Shri J L Nehru uttered the following against Netaji which was reported in Anandbazar Patrika and Hindustan Standard and some other newpapers of the 22nd February 1942:- 'Let him not commit the error that they had fallen into the past by thinking that they could ask for the aid of any power outside. Therein lay dangers; therein lay peril; and if any of them thought in those terms, it was not any kind of courage, it was a sign of cowardice.'"

This writer gathers that Dwijen collated this and other details at the behest of his uncle, another brother of Subhas’s. Sarat Bose seethed in anger when he came to know about Nehru taking swipes at his kid brother.

The following, for instance, appeared in the Hindustan Standard at that time and relates to first charge made by Dwijen in his letter: 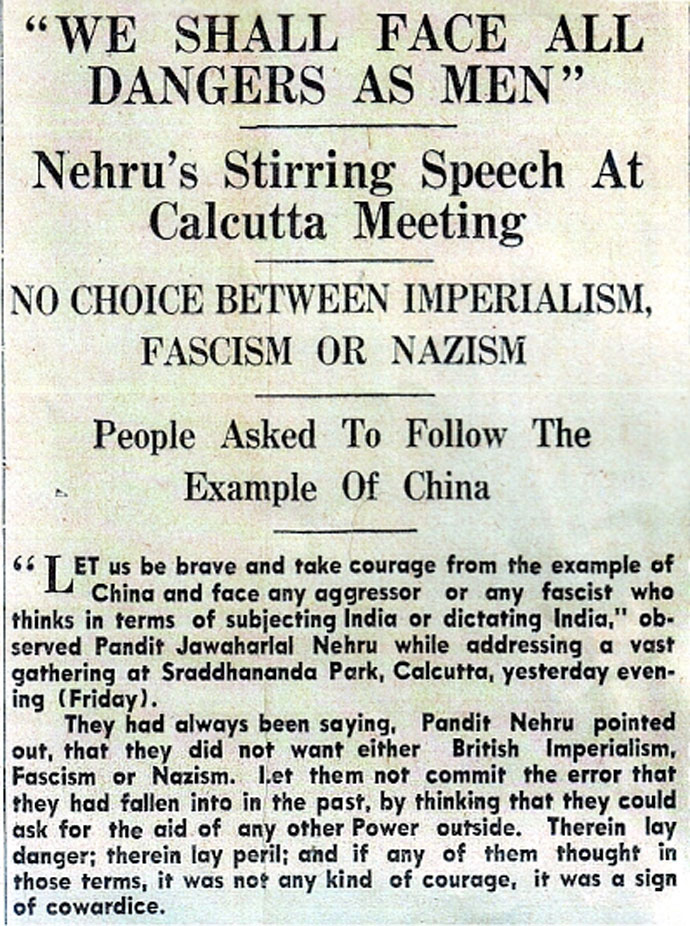 Dwijen’s letter to Shah Nawaz goes on to make a litany of charges:

1. In numerous public statements and speeches between April 1942 and August 1945, Shri Nehru said that Subhas Bose and his Azad Hind Fauz were "misguided", "mislead", "wrong in their methods", etc. Shri Nehru cannot deny all these.

2. On the 23rd June 1945 at a press conference at Jinnah Hall, Bombay, Shri Nehru said as follows:- "When I was in Calcutta in 1942, there was a talk of Subhas Chandra Bose leading an Indian contingent of liberation against India. I was asked what my attitude would be. I said, I will oppose him and fight him because he is coming under Japanese auspices and under Japanese control and more for the advantage of Japan than for India. Subhas Bose was quite wrong in his methods when he thought that he would achieve the freedom of India with the help of the Japanese."

3. On the 12th April 1942, at a press conference in new Delhi, Shri Nehru made the following remarks against Netaji which appeared in the above named newspapers: - "It is a slave's sentiment, a slave's way of thinking to imagine that to get rid of one person who is dominating us we can expect another person to help us and not dominate later. Free man ought not to think that way." At the same press conference, Shri Nehru said that he would oppose and fight Subhas Bose to death.

4. On the 2nd July 1945 the following report of Shri Nehru's press conference in Simla held on the 1st July 1945 appeared in many newspapers:- "Asked what his attitude towards Subhas Bose today was, Pandit Jawaharlal Nehru recalled that the statement which he made in reply to a similar question early in 1942 at Calcutta. He had then said that he fight against Subhas Bose if he were to come to India under the auspices of the Japanese Government because his coming to India then would have proved dangerous for the future of India. But after the Japanese war, if Subhas Bose were to come to India, Pandit Jawaharlal Nehru said it would be wrong to adopt any vindictive policy towards him. It was however a different matter as to under what conditions he (Subhas Bose) would be allowed to return to India."

5. In July-August 1945, in answer to some American journalists at Delhi, Shri Nehru said as follows:- "Subhas Bose formed the Forward Bloc to attack the Congress."

Dwijen ends his letter with these words: "Shri Nehru was questioned and heckled by the public meetings addressed by him in Calcutta on the 21st and 22nd December 1945 about his above utterings and he was challenged to prove his above utterings. Leaflets incorporating the above utterings were given to Shri Nehru for his answer. But Shri Nehru had not the courage to make an attempt to answer and somehow managed to evade the questions." 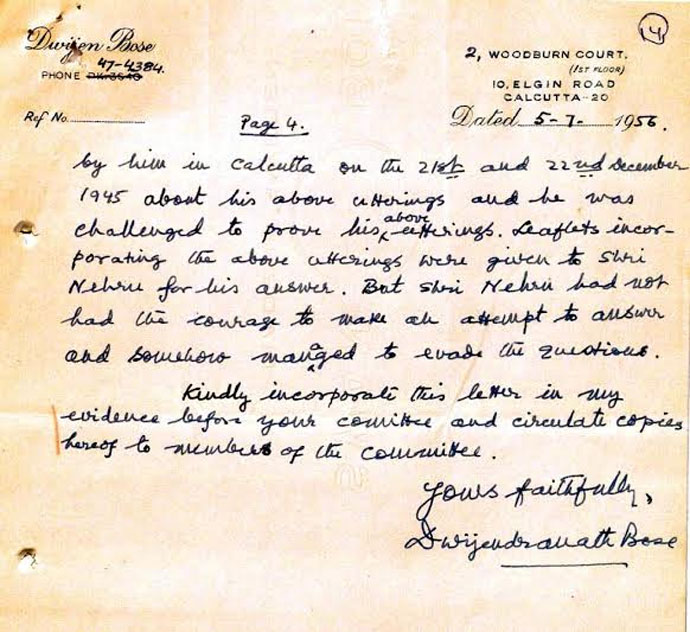 #Narendra Modi, #Jawaharlal Nehru, #Netaji Subhas Chandra Bose, #Netaji Files
The views and opinions expressed in this article are those of the authors and do not necessarily reflect the official policy or position of DailyO.in or the India Today Group. The writers are solely responsible for any claims arising out of the contents of this article.