Why Netaji 'gold tooth' story has no teeth

Ashis Ray, a Congress supporter, is dishing out bits and pieces to suit his own notions about Bose's reported death.

The latest from Ashis Ray, one of the Congress party supporters in Subhas Bose's family, is that "there could be a tooth of Subhas Bose in his remains in Tokyo".

Before you began treating it as an "amazing discovery" - hold on.

Like most of the things Ray is hyping up, the gold tooth story is a rather well-known one. Ray is simply dishing out some bits and pieces to suit his own notions about the reported death of Subhas Bose.

If he was so sure of his ground, why did not Ray appear before Justice Mukherjee Commission of Inquiry set up in 1999 following a court order?

"Never mind that, but did Netaji really have a gold or gold-covered tooth?" you might ask. "If it indeed were the case, wouldn't its discovery in the remains kept in Renkoji temple prove that those are really of Bose?"

If only things were that simple, there wouldn't be so many classified files about Bose's reported death in Taiwan!

Ray writes: "Bose's highly trusted ADC Colonel Rehman, who was involved in the accident with the former, but survived the tragedy, narrated to his son Naeemur Rahman he had dropped Bose's tooth in the urn when he went to collect the remains after the cremation. It had apparently been extracted before the body entered the furnace and was given to him by one of the officials associated with the last rites."

What Rahman said and what different people made of it warrants a separate story. Rahman also gave out a story about a watch removed from Netaji's body. The watch wasn't Bose's -- it became known later on.

All the same, going through Rahman's detailed testimony before the Shah Nawaz Committee in 1956, I find no reference to the extraction of the said tooth before the body was pushed into the furnace. Naeemur Rahman is no longer alive to vouch for Ray's version.

All that Rahman had told the committee was that when the ashes were being collected after cremation, he saw a "little piece of gold, which was from the filling of one of Netaji's teeth". This was removed and placed in the urn, according to Rahman.

The evidentiary value of the gold tooth story was discussed by Justice GD Khosla, whose 1974 report Ray backs. Unknown to Ray, Khosla demolished the hypothesis Ray is building up.

I hate to quote Khosla - Jawaharlal Nehru's friend and Indira Gandhi's hagiographer - to prove a point of mine, but the gold tooth matter is an exception. Khosla's problem was that those who disbelieved the air crash theory found fault in his not examining the Renkoji remains and noting that there was no trace of gold in it.

To ward off criticism that he did not do so for fear of raising a question mark on the air crash theory, Kholsa - a most astute man and a wonderful writer - marshaled arguments which Ray would find unsettling:

1. Two uncles of Ray who had appeared before the Khosla Commission made contradictory statements on this point. "There was gold on one tooth at least; it was bound with gold," said Amiya Nath Bose, nephew of Subhas. On the other hand, Aurobindo Bose stated: "So long as he was in India, we were very close to him personally, he did not have any gold tooth here." 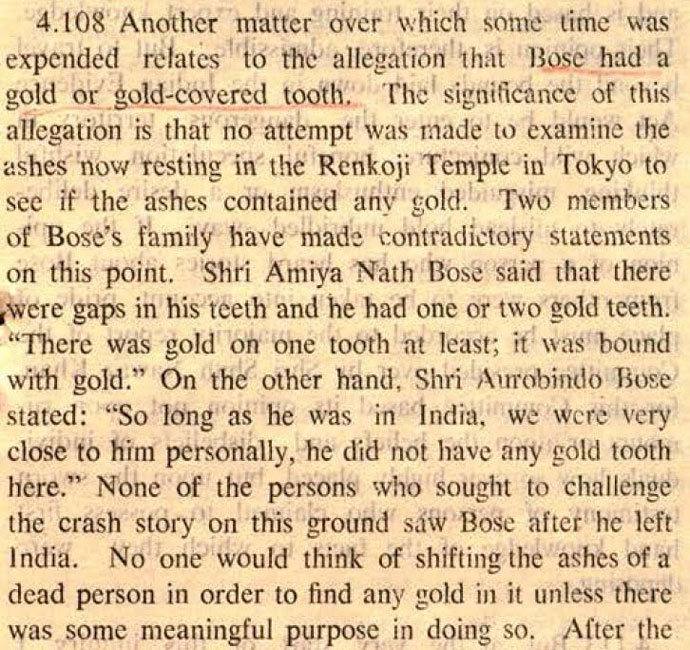 2. Added to the above was a pertinent observation made by MP Samar Guha that a gold tooth would have been a distinct hazard when Netaji was travelling incognito in 1941, as it would have facilitated identification, and he may well have removed that tooth had it been a gold one.

3. In the words of Khosla, "If upon examination, now, the ashes do not yield any clue, the story of the air crash cannot be said to have been contradicted because (i) Shri Aurobindo Bose said that Netaji had no gold tooth, (ii) according to Shri Samar Guha, a gold tooth, if it were there, would have been a hazard and might well have been removed, and (iii) the infinitesimal quantity of gold which constituted the gold filling might well have been lost. On the other hand, the presence of a piece of gold can always be explained away by saying that it could have been introduced into the ashes by someone determined to prove the story of the air crash and Bose's death at Taipei".

I ditto this line of argument. Presence or absence of gold would neither approve or disapprove the air crash theory.

Also read: Why was UPA government hell-bent to 'kill' Netaji?

Post your comment
#Netaji's death, #Netaji Files, #Jawaharlal Nehru, #Netaji Subhas Chandra Bose
The views and opinions expressed in this article are those of the authors and do not necessarily reflect the official policy or position of DailyO.in or the India Today Group. The writers are solely responsible for any claims arising out of the contents of this article.