The 'caged parrot' displayed petulance and extreme insecurity in the 'letter to the editor' over the Times' scathing editorial on the NDTV raids.

In what seems to be the latest instalment of a prolonged theatre of absurd, the Central Bureau of Investigation (CBI) has shot off a letter to the editor of the New York Times, expressing umbrage at the latter's editorial dated June 7, 2017, titled "India's Battered Press".

The letter, signed RK Gaur, who is the press information officer and a spokesperson of the CBI, attempts to explain why the NDTV raids on June 2 weren't about muzzling of the press, as the NYT editorial, as well as several opinion pieces in India's sprawling print and digital media suggested, but just routine exercise. The CBI letter said that the "editorial is one-sided and doesn’t consider the investigation history of the case against RRPR Holdings by different tax and law enforcement agencies in India since 2011".

It also said that the decision to take NDTV India off the air for "irresponsible reporting" was "arrived at after a proper inquiry in which NDTV also participated. No democracy can allow the country’s security and public safety to be compromised by irresponsible reporting of terrorist incidents".

Finally, the terse letter, reeking of highly impertinent petulance from none other than the country's top investigating body, ends with the dramatic flourish that's better suited to a WhatsApp group skirmish among friends. It says: "India does not require any lesson on freedom of the press from The Times. Our institutions and traditions are nurtured by our rich and diverse cultural heritage and democratic ethos".

That the NDTV raids came at a time when freedom of expression and of the press has become a rallying point in the country, and barely days after a spokesperson from the ruling party at the Centre was asked to leave a debate by an NDTV anchor over uncivil behaviour on live TV, are rather well known. Of course, editorials aside, the June 9 solidarity meet at the Press Club in New Delhi, where the doyens of Indian journalism, including Prannoy Roy, the NDTV co-owner and the one in the eye of the storm, Arun Shourie, Kuldip Nayar, HK Dua, Om Thanvi, as well as eminent jurist Fali Nariman, addressed a motley gathering of young and older journalists, from TV, print and digital media alike, also became a focal point of action and resistance against the raids.

Almost every day since then, there has been a piece in the Indian press responding to the NDTV raids, the "Freedom of the Press" meet - many criticised the "manel" that addressed the gathering at the Press Club, the utter and frankly unpardonable lack of diversity among the speakers, who were basically established male journalists currently out of favour with the hideously maladroit and under-performing regime, that's also overtly communal in its Hindutva agenda.

A number of pieces pointed out that the uber-polished Prannoy Roy looked out of place at the Press Club, removed as he seemed from the day-to-day drudge of news-gathering, while Arun Shourie, once the editor of the Indian Express and a former Union minister under the NDA 1 regime of Atal Bihari Vajpayee, had long supported Narendra Modi and the RSS to turn against them after been rendered out of favour.

While the Indian media was engaged in navel-gazing, divided between the polar opposites that have split it right in the middle, the CBI didn't really bother issuing a corrective beyond the statement that it didn't in fact raid the offices of NDTV at all, but only the residences in Delhi and Dehradun, of Prannoy and Radhika Roy, the owners of RRPR Holdings Ltd, the object of the criminal investigation. Yet, the well known strategy of intimidating the press by attacking the promoters, thereby squeezing the publication (such as Tehelka, Outlook in the past), or the TV channel and draining it of its finances, was called out in no uncertain terms.

However, that the CBI decided to respond in a letter brimming with churlish under-confidence and deep insecurity about its standing, to an NYT editorial that wasn't a quarter as critical of the raids as many of the pieces published in the India media, tells a very different story. 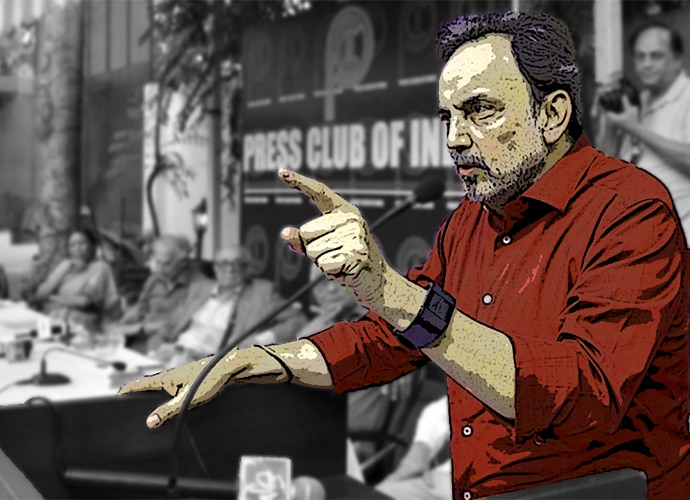 In fact, when Arun Shourie, in his "eight commandments" for the press to strike back and regain its true role as the Fourth Estate, said that media must publish what the government wants to hide and must use the foreign press to rankle the regime's nerves, he was bang on target. That the CBI shot off a letter to the Times in a bid to correct the NYT's editorial lapse of judgment, and also to sermonise how India doesn't need a lesson from the Times on freedom of press, is beyond embarrassing, but also telling.

Exactly as the CBI is busy raiding Opposition leaders, taking on the Modi government's political and ideological adversaries in concocted or flimsy charges that barely hold, it errs once again in doing what's evidently its master's bid. The "caged parrot" has now become a political tool as also a smoking gun that lays bare the boundless hypocrisies of the present government in targeting those who call out its serial and routine lies, idiocies, false claims and the institutionalisation of bigotry evident in the slew of legislations it's bringing in to justify its communal worldview.

The curmudgeonly CBI, however, also betrays extreme unprofessionalism when it decides to preach from the pulpit and tell the press about freedom of the press while harping on our "democratic ethos" that the government is busy trampling more and more every day. Much like the needless statements issued by the Indian Army chief on matters that need delicate and studied radio silence from the armed forces, this overt attempt at self-explanation comes out as a pitiful instance of the CBI's own diminished stature in the country and abroad.

With PM Narendra Modi busy touring Europe, UK and then eventually the US to meet President Donald Trump on June 26, the global surround sound needs to be fine-tuned to the domestic panegyrics that are ritually beamed from regime-friendly TV and print news outlets.   Yet, not only have serial gaffes on the part of various ministries and departments, such as the recent AltNews expose of using Spain-Morocco border to show floodlights in streets that seemingly depict the Indo-Pak border, made the regime a butt of jokes, even PM Modi's touchy-feely style has received humorous commentary in the international press.

Barely a month back, the RSS super-baby producing advice and the more recent "no sex, no meat" suggestion for pregnant women from the AYUSH ministry, have also garnered global ridicule. Certainly, the Modi government's nerves are too jangled from all the barrage of negative press, but even then, the CBI's unruly letter to the editor aimed at the NYT is beyond belief.

The sobriquet "caged parrot" which it got from the Supreme Court, while its former chief Ranjit Sinha came under the scanner, it seems still holds and how. Only now, the parrot is also acting like a pigeon delivering ungracious and frankly shameful notes to journalistic institutions that are older than itself.

Also read - Why Arun Shourie is wrong about Modi government

#NDTV, #CBI, #Press Freedom, #New York Times
The views and opinions expressed in this article are those of the authors and do not necessarily reflect the official policy or position of DailyO.in or the India Today Group. The writers are solely responsible for any claims arising out of the contents of this article.