Assam NRC excludes 19 lakh: Is the number too high or too low?

Statements made by various chief ministers and Union ministers over the years are proof the final list has got its maths all wrong.

Out of the nearly 40.7 lakh people excluded from the draft list, the final National Register of Citizens (NRC) has excluded about 19 lakh. The response to the final list varies from scepticism among Assamese, to strong support among religious minority groups like the All Assam Students Union and All India United Democratic Front, to critical support from the largest student organisation of Assam, All Assam Students Union (AASU), to even total rejection from certain quarters like sections of the BJP.

Amid these varying responses few critical questions that demand answer are:

1) Is the number too high or too low?

2) Will those excluded become stateless?

3) Will they be put into detention camps?

4) Is the process pro-Hindu and anti-Muslim? 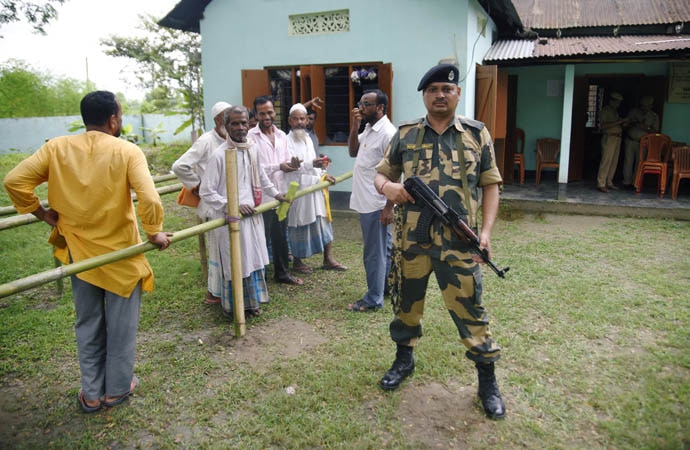 The final National Register of Citizens has met with mixed responses. (Source: Reuters)

The debate about immigration and citizenship is part the larger debate about nationhood — about what it means, or ought to mean to belong to a nation.

Nation-state is understood as a distinctive way of characterising and evaluating political and social membership. A nation-state is associated with sovereignty, territoriality, population and government. From this perspective, only certain groups of people qualify as citizens. The truth is that the notion of citizenship isn't a democratic or moral concept because it is based on exclusion — it excludes groups from membership of the state.

Most of the writings about NRC are based on a profound ignorance about the state and its pre- and post-colonial history. Some ill-informed arguments are: the NRC process is anti-Bengali and anti-Muslim; the entire exercise is xenophobic and dangerously nativist.

According to these arguments, Assam becomes another pawn in the larger debate around secularism and communalism. Certain procedural lapses of exclusion of genuine citizenry notwithstanding, the NRC list is not discriminatory or bears any primordial considerations — be it religious or linguistic.

At a time when the otherwise conflict-ridden heterogeneous civil society like Assam has shown great maturity in addressing the issue, the outside illustrators are still wondering why the prophecised civil war has not arrived in the state yet.

Some say the left-out people would be put in detention camps without voting rights. There are certain grey areas which need to be addressed. However, putting the excluded people in detention camps is not what is being contemplated. The excluded people would enjoy the right to vote. Those excluded would not become stateless as this would warrant the intervention of the United Nations in some form or the other.

Thirty-nine designated courts will create clusters whereby the cases will be distributed to 300 Foreigners Tribunals (the number is likely to go up to 1,000). There is no mechanism to put 19 lakh people into detention camps. The finally excluded people after their hearing in Foreigners Tribunals and subsequently in courts are likely to get some Digitized Unique Identifying card through a biometric data bank. They are likely to be issued certain work permits which will be linked to the biometric data system. Only those who are habitual offenders with criminal and security threat record may be put in detention camps. The fear that those exluded from the NRC would be put in detention camps is unfounded. (Source: Reuters)

The formulation and implementation of NRC at the behest of the Supreme Court is the culmination of a historical process that began in the 1930s, initiated mainly by Muslim League governments in Assam under the leaderships of Syed Saadullah and Abdul Hamid Khan.

Schemes launched by the Muslim League governments such as colonisation and development plans and the settlement policy led to a massive inflow of Mymensingh Muslims who were subsequently granted government land. Consequently, a line system was introduced as a means to segregate the Bengali Muslims from tribal and backward classes, who were the indigenous Assamese.

It was an intensive measure adopted to check the indiscriminate settlement of immigrants. On the eve of independence, Assam was faced with another challenge when plans were being made to merge the Hindu-majority Assam with Bengal in Section C of the grouping plan of the Cabinet Mission. Thanks to the bold leadership of Congress member Gopinath Bordoloi and single-handed support of Mahatma Gandhi, Assam managed to retain its separate identity.

In 1950, keeping in mind the nature of immigration, the Immigrants (Expulsion from Assam) Act was enacted in Parliament, under which a provision was made to expel certain groups as “the stay of such persons in Assam is detrimental to the interests of the general public of India or any Scheduled Tribe in Assam…”

The clause was not applicable to those who had come to the state on account of civil disturbances or fear of such disturbances in Pakistan. In addition, the Census of India 1951, under the Ministry of Home Affairs, introduced NRC for Assam: “An important innovation of this census was the preparation of a National Register of Citizens in which all important census data was transcribed from the census slips… It will be maintained as permanent record and kept up to date by collecting information through village officials… thus the NRC will maintain intercensal continuity, will be useful for electoral and various other administrative purposes….”

Many journalists writing on NRC have urged for a flexible and humane approach to the citizenship issue. Nation-state, for many, is an evolving idea, not a pre-fixed one, and can adopt a flexible approach for citizenship.

Assam is the best example of such flexible citizenship laws. No other state in India had accepted illegal immigrants. For example, as per Article 6 of the Constitution, July 19, 1948, has become the baseline for the determination of foreigners in India. The Assam Accord accepted a new date for the determination of foreigners in case of Assam, that is, March 24, 1971.

Thus, Assam agreed to accommodate the burden of 23 years of illegal migrants, a condition which is not applicable to any other state of India; yet the people are accused of being xenophobic. Interestingly, this was the phase during which Assam witnessed the maximum number of illegal migrants from erstwhile Bangladesh, as virtually there was no border between the two regions. Besides, poverty, high density of population, flood, linguistic and religious similarities in the border districts of Assam and Bangladesh worked as the push for immigrating to Assam.

The problem was further compounded as citizenship laws have been amended over time, practically allowing a Bangladeshi descendent to become a citizen of India/Assam if born till December 2004. Assam made special provisions to accommodate illegal immigrants and is now paying the price for it. (Source: Reuters)

The number of 19 lakh hardly meets the aspirations of the indigenous tribal and the Assamese people. The BJP built a scenario where people started to believe the numbers would touch 50 lakh.

On April 10, 1992, former chief minister Hiteswar Saikia said in the Assam Assembly that the figure stood at 33 lakh. On May 6, 1997, the then home minister, Indrajit Gupta, in Parliament, gave a figure of 40 lakh foreigners.

According to a statement made by Minister of State Home Sriprakash Jaiswal in Parliament on July 14, 2004, the total number of Bangladeshi infiltrators in India was 1.2 crore, Assam – 50 lakh (40 per cent of the total) as of December 31, 2001.

The numbers in all these years are only likely to have gone up. A reality check in Assam would reveal huge change in the demographic and land-holding pattern in the border and other districts of Assam.

From two Muslim dominated districts, Assam today has 11 districts dominated by Muslims who originated in East Bengal. From 1991 till 2011, the Muslim population growth in the state has been 5.79 per cent, while the population of Hindus declined by 5.66 per cent.

Out of 126 Assembly seats, there are 51 constituencies where Muslims of East Bengal origin play the most decisive role. This explains the near extinction of Asom Gana Parishad, a regional party, born out of Assam movement.

The fear is that Assam would soon become an immigrant-driven society. Keeping in mind the trend of population growth among the Muslims of East Bengal, the fear seems to be a reasonable one.

The low number of exclusions in NRC is also attributed to the ‘manipulation of legacy data’, as the family tree is not biometric-based and there is no mechanism to verify the authenticity of many documents like panchayat certificates.

The protection of the tribal land and culture in Assam was a promise made by Jawaharlal Nehru and other stalwarts in India’s Constituent Assembly through ‘panchasheel tribal principles’.

Various institutional mechanisms have been made, including introduction of constitutional protections, which are now being violated by incessant immigration and land encroachment.

One has to understand the dilemma of a smaller nationality like the Assamese community whose numbers have been dwindling. The situation has reached a point where there is a possibility of the community being declared a minority group in its own homeland.

Post your comment
#Assam accord, #National register of citizens, #Nrc in assam, #NRC
The views and opinions expressed in this article are those of the authors and do not necessarily reflect the official policy or position of DailyO.in or the India Today Group. The writers are solely responsible for any claims arising out of the contents of this article.

Author is professor of Political Science at Gauhati University.