I call them the Great Pen Wars. After the first battle, a second opened after the acceptance of the highly discriminatory award of the 7th CPC.

I decided that in addition to factual information about the armed forces, I should use this forum to give out my opinion on various issues that seem to be surfacing at regular intervals.

The genesis of all current problems seems to go back to the award of the 6th Central Pay Commission (CPC) that came into effect from January 1, 2006. It coincided with the widespread proliferation of MSM and social media, in print, electronic and gadget mediums.

The veterans of the armed forces decided to take up the cause as those serving did not have any rights to protest or even raise their voice against perceived injustices, other than through normal channels of command, ironically the same channels that had passed the unjust order in the first place.

The first signs of open dissent had been seen after the 5th CPC, where the Air Force technical cadre had publicly demonstrated against the anomalies in awards between them and the flying cadres. This being a single service and that too a protest of limited numbers, all conditions were agreed to and everyone was none the wiser.

The next defiant stand was taken by then CNS Admiral Sureesh Mehta, when he passed orders to the Navy not to implement the award of the 6th CPC. Once again, the effect of a small service being clobbered into submission brought the curtain down on this episode, the good Admiral soon retired and business carried on as usual.

The 38 anomalies with regard to the armed forces pointed out by the tri-service pay cells after the 6th CPC remain unresolved even ten years and numerous committees later.

It was only after the 6th CPC that it was noticed that due to an anomaly, Brigadiers were drawing higher pensions than Major Generals. After the initial bout of representation, applications and redressal requests had been consigned to the shredder by the ministry of defence (MoD) under the watch of then RM and ironically the current supreme commander, that, in 2008, a group of general officers of the three services and supported by the relative junior veterans as also personnel from the rank and file, created an all-India organisation called the Indian Ex-Servicemen's Movement (IESM).

The aim of this movement was to create an atmosphere for the implementation of One Rank One Pension, an issue hanging fire since 1982. The anomaly of differential pension between Brigadiers and Major Generals was accepted by the Supreme Court (SC), now known as the SPS Vains Vs Union of India case.

The court order was passed in 2010, and was contested again and again by the MoD on flimsy grounds till they had to eat crow and correct the injustice as late as the second half of 2015 – it took seven years to clear an open and shut case fought by the affected officers on facts and contested by the MoD on a set of half and untruths on the one hand and twisting of facts on the other. 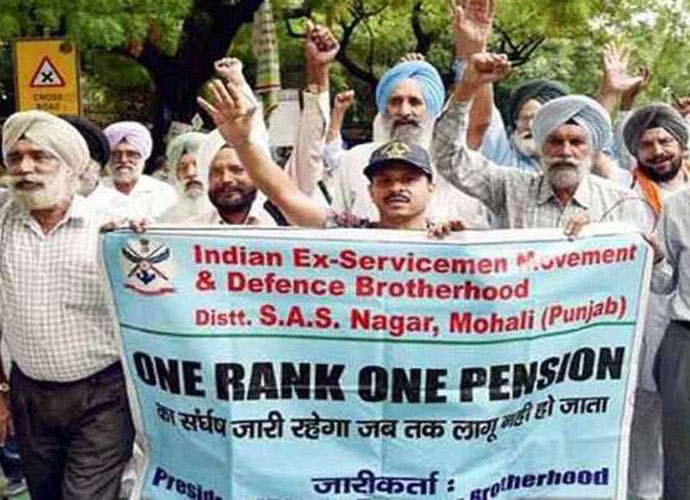 The matter of One Rank One Pension has been hanging fire since 1982. (Photo credit: India Today)

The IESM, a self-financing, non-profit organisation was created as the other organisations existing at that time - Indian Ex-Services League (IESL) was a quasi-government body, the Air Force Association had the serving chief as its patron, and the Navy Foundation has till date shied away from any form of protest - did not project or protest any kind of unjust issues heaped on the serving or veteran community due to the apprehension of the heavy dose of government largesse being taken away from them.

All this changed on or around the end of December 2014, when IESM announced a protest rally at India Gate to coincide with Army Day 2015. A flurry of activity and immediate consultations were announced and the RM called for an urgent meeting at Kotah house with representatives of the IESM from across ranks and across services.

The COAS was present; he assured all present that by March 31, 2015, at the latest, OROP would be a reality. Many such dates were promised between March 31 and May 28, 2015, but the announcement remained elusive.

On June 6, 2015, on a call given by the IESM, a number of ESM organisations' representatives gathered at the Constitution Club in a show of unity. Barring a certain amount of uncivilised behaviour by some disgruntled ESM, the meeting passed off amicably and it was decided to hold a massive rally at Jantar Mantar as the India Gate area had been placed off limits for such activity.

Unknown to most, the rally had the blessings of the RM who was having a tough time getting past the villain of the piece, "the FM". The PMO was also looking on helplessly as Jet Lee put one obstacle after another to thwart the acceptance of OROP as accepted by Parliament and categorically promised by the PM in his election speeches and as mentioned in the BJP's manifesto for the Lok Sabha elections 2014.

The rally was a grand success with over 50,000 ESM and families attending. Simultaneously, rallies were held by ESM in over 55 cities pan India. This pattern continued till September 5, 2015, when the RM in the presence of the three chiefs and the defence secretary announced the acceptance of OROP, albeit not fully as per the accepted definition.

There were four glaring omissions and so the protests continued. The central government notified the watered down award on November 7, followed by appointing a one-man judicial committee to look into the anomalies.

This could be described as the first battle of the great Pen War. As if this was not enough, a second battle of the Pen War opened shortly thereafter by the acceptance of the highly discriminatory award of the 7th CPC.

This was followed by two more fronts being opened up - one against disability pensions and the next on the intra status of AHQ civilian officers viz defence officers on the specious need of functionality.

All this under the backdrop of the ongoing conflict in J&K and the Northeast, the daily loss of soldiers and the daily creation of platitudanal "jhumlas" exhorting the armed forces.

Social media erupted as never before and former uniformed writer after writer used his newfound weapon, his pen, to spew venom on the perpetrators of the terrible state meted to their erstwhile colleagues after having crossed the LoC, in this case control being equated to gentlemanly behaviour.

The three chiefs took a stand and refused to implement the unjust awards. A new committee was ordered, the RM showed surprise on such temerity despite each missive carrying a line as if it was a statutory warning on a cigarette case saying: "This has the approval of the RM."

As we go into the post-Diwali and pre-Xmas period, approaching the day that India's armed forces gave to this nation its most prized victory, as the northern passes close, as our western neighbour undergoes another series of labour pains to come out of its troubled existence, we wonder whether we would have a winter of peace and tranquility or one of discontent.

While constant efforts to upgrade the police, PMF and CAPF are understood, the simultaneous degradation of the military in more ways than one is not understood. In fact, it is becoming a de-motivating factor and when the last straw on the camel’s back snaps, will the government of the day take note? If such a state was to come to pass, one shudders to think of the consequences. It is time to introspect before it is too late.

#Armed Forces, #Disability pensions, #OROP
The views and opinions expressed in this article are those of the authors and do not necessarily reflect the official policy or position of DailyO.in or the India Today Group. The writers are solely responsible for any claims arising out of the contents of this article.

The author is a Vir Chakra recipient who served in the Indian Peace Keeping Force (IPKF).