The Minority Question: In Pakistan, the rise of Imran Khan has Ahmadiyas and Shias in fear

The former cricketer rode to power on a wave of competitive radicalism.

While the repercussions of the recently held Pakistan elections vis-a-vis its foreign relations have been eloquently discussed and debated, religious and political minorities within Pakistan remain marginal to these deliberations. This remains the consistent, perpetual proof of the marginalisation of Pakistan’s minorities in their own homeland.

While the Election campaigns had Ahmadiyas at the heart of the debate — Khatam e Naboowat, or the Finality of the Prophet, was a rallying slogan — the-post election scenario mentions little of them. They were fought over, and now lie defeated and silenced. Religious minorities in Pakistan have never had it easy. 'Naya Pakistan' does not seem promising either. (Photo: Reuters/file)

So does Jibran Nasir, one of the few candidates who fought for secular demands and promises, presented a manifesto centred around the water crisis and poverty, and persistently steered clear of Sunni political consolidation during campaigning.

While there were serious allegations of rigging, and the results remain “contested”, with the PMLN, the PPP and other smaller parties alleging that their political workers were sent back from the polling stations without filling Form 45, the “manufacturing” of the election by Pakistan’s deep state began much before the counting of votes.

It began by putting Imran Khan’s main political rival, Nawaz Sharif, behind bars during the crucial time of election campaigning, delivering the first dent to an already fragile democracy in Pakistan.

Even though 'democracy' has been understood differently by different scholars, and has had varied meanings and definitions, most would agree that a well-functioning democratic system is fundamental to the protection of minorities. The V-Dem Institute’s definition of democracy says: “The liberal principle of democracy emphasises the importance of protecting individual and minority rights against the tyranny of the state and the tyranny of the majority”. Therefore, this resumed military authoritarianism, disguised as a new era of “Naya Pakistan”, is going to weigh down heavily on dissenters.

The press and media, which form the backbone of differing opinions in any country and serve as an intellectual opposition, have already faced the heat. Even before the PTI victory, the International Press Institute, based in Vienna, described the clampdown on the press as “unprecedented”. 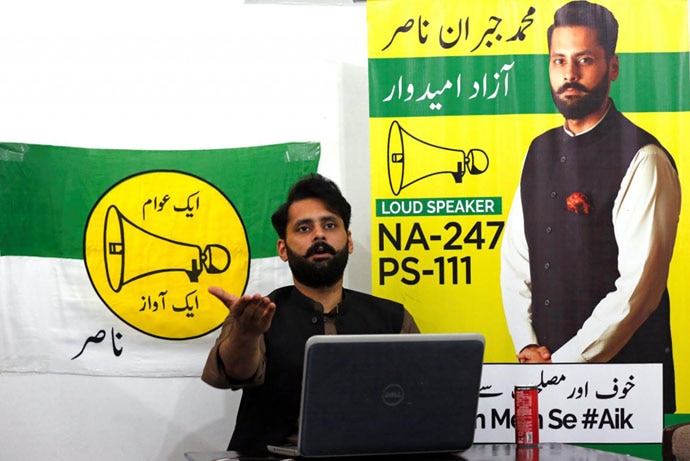 Jibran Nasir, one of the few candidates who fought the polls over issues such as water and poverty, was defeated. (Photo: Reuters/file)

Top Army officials in Pakistan held conferences where “guidelines” were issued to the media, with some independent journalists being called “anti-state” and “anti-Pakistan”. Threats, intimidation, kidnappings are all well-known tactics of muzzling the press in the country. Dawn, Pakistan’s leading newspaper, has had to face restrictions after it published an interview with Nawaz Sharif which was critical of the Army.

With Imran Khan at the helm of affairs, there can be no serious optimism about free media in Pakistan.

The fate of columns by minority liberal authors, who wrote and spoke fearlessly through the medium, is similarly unclear.

It is a free and fair media that gives an individual the power, and the platform, to speak against a powerful state. Any clampdown on this would eventually drown out the voices of political liberal minorities who work under dangerous conditions anyway. Religious minorities would have to face the heat equally.

As Nadeem Farooq Paracha puts it, contrary to popular opinion, where Zia Ul Haq’s tenure has been understood to usher in “Islamisation” of the country, it was never a fight between secular politics and Islamic politics in the country — it was always about a soft religious government vs a hard religiosity-imbibed state.

However, what sets apart this election from previous ones is the mainstreaming of hardline religious groups. It has been pointed out that despite the seeming rejection of Hafiz Saeed at the polls, the Tehreek-I-Labbaik Party has emerged as the third largest in Punjab.

The Tehreek-I-Labbaik mostly includes Sufi Barvelvis. Sufis, theologically, have quite moderate views on religion, and a hardline party from this sect represents is the increasing radicalisation even among Sufis.

Ahle Sunnat Wal Jamat, another hardliner party, provided considerable electoral support to Imran Khan. The mainstreaming of such rhetoric forced even the otherwise “secular” parties to publicly engage with blatant anti-minority slogans. While some remained quiet, others, for fear of losing majority support, had to chip in. This led to what Rana Banerji has termed “competitive radicalism”, which spirals into a situation where all political parties compete to appear more and more religious, converting socio-political rhetoric into a rivalry of religiosity.

Imran Khan’s PTI rode to power on this wave.

“He employed toxic sectarian and anti-Ahmadiya rhetoric to woo the far Right during his election campaign,” Kashif Chaudhary, a Pakistani human rights activist, said to me in a personal conversation. Imran Khan has upheld the existing discriminatory laws against one of the most persecuted minorities of the world, and even promised to uphold anti-Ahmadiya legislation in the Pakistani Penal Code. PTI's political campaign constantly reiterated the call of 'death penalty for blasphemers'. Imran Khan publicly attended conferences where Sunni hardliners would demanded tightening of laws that curb the Ahmadiyas' right to religion, and free speech. Over all, the campaign did not just win votes for Imran Khan, it ushered in a newfound authoritarian Sunni political consolidation.

Nadeem Masih, from a small Christian community in Islamabad, tells the Independent, “He [Imran Khan] is not interested in our rights, if I tell you the truth.”

Imran Khan’s views on western feminism having “degraded motherhood” and on “fake liberals” are too well-known to be repeated here.

Such rhetoric at the top is often emulated by the bureaucracy, civil servants, the police — right down to the bottom, making it difficult for minorities, liberal men and women to avail state services. It is therefore pertinent for some Indians  to not camouflage Imran Khan’s excessively negative campaign — which leaves the media, liberals, and religious minorities silenced — under the cover of “his good looks” and his “cricketing skills”.

We are not dealing with a cricketer anymore. Neither is this just another game that is at stake. It is about the lives and the dignity of Pakistan’s liberals and religious minorities that lie suspended in anticipation of what could or could not happen. This is what Indian liberals will have to argue for, and defend.

When asked if religious minorities would stand a chance if they were to gear up to fight against intolerance, Kashif N Chaudhary says, “All they (religious minorities) can do is hope and pray that justice is ensured and extremists are kept in check under Khan’s government. Other than this and raising their voice directly and through human rights groups and activists, there is not much they can do.”

I could sense a persistent defeatist gloom already. The best case scenario would be if this was proved wrong.

But the signs are not looking good.

Also read: The Imran Khan I know — and trust

#Ahmadi Muslim, #Religious minorities, #Imran Khan, #Pakistan election
The views and opinions expressed in this article are those of the authors and do not necessarily reflect the official policy or position of DailyO.in or the India Today Group. The writers are solely responsible for any claims arising out of the contents of this article.