Islamist terrorists are the real threat to Pakistan, not Baloch leader Bugti

'Seeking Interpol red notice against him is a gimmick to reinforce anti-Baloch propaganda.'

Imagine this scene from the Bugti area in France-sized Balochistan in the past weekend — Pakistan army completely seals the entrance and exit points of a place called Pasheni and continues indiscriminate shelling on the civilian population from the air and ground; the confirmed death toll is 16, including women and children, and over 30 wounded.

In addition, the Pakistani soldiers burn down more than 200 houses and loot the tribesmen's cattle.

Such war crimes in Balochistan, though unreported, are not new but have been continuing for 12 years now since former Balochistan governor and chief minister Nawab Akbar Khan Bugti threw the gauntlet at coup leader and military dictator general Pervez Musharraf. 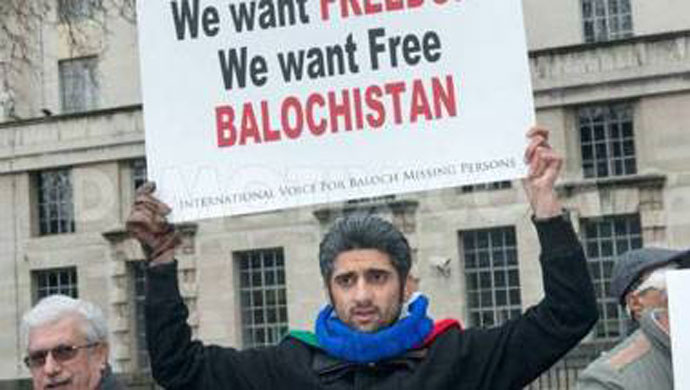 ' War crimes' in Balochistan, though unreported, are not new but have been continuing for 12 years now.'

Nawab Bugti, along with more than two dozen comrades, was assassinated by army commandoes on August 26, 2006, following Musharraf’s order. Musharraf later said the entire army GHQ was on board with him in the killing. Aircraft and poison gas were said to be used against Bugti, 79.

Surprisingly on Tuesday (February 28), Pakistan interior ministry asked the Federal Investigation Agency to formally send a red notice to the Interpol in Lyons, France, asking for the arrest and extradition of slain Nawab Bugti’s grandson and political heir Swiss-based Brahumdagh Bugti, president of the Baloch Republican Party (BRP) and his trusted lieutenant Sher Mohammed Bugti, the spokesperson for the BRP.

“The issuance of red warrants against me and my party leadership by Pakistan exposes its psychological defeat by democratic Baloch struggle,” Brahumdagh Bugti tweeted.

“Pakistan cannot silence and suppress the democratic struggle of Baloch people by atrocities in Balochistan and issuing red warrants against us.”

Bugti said the world is gaining insight into Pakistan’s war crimes in Balochistan. “Red warrants against us is a move in frustration,” the BRP president, who is also the chief of the largest Bugti tribe, said.

Pakistan’s former ambassador to the US, Husain Haqqani, now director for South and Central Asia director at the Hudson Institute in Washington DC — who himself was almost killed by the dreaded ISI after he was recalled to Pakistan and sacked for allegedly helping the US bring Osama bin Laden to justice five years ago — observes the Pakistani move was just meant for playing to the local galleries and does not have feet to stand.

"It is just a gimmick for domestic consumption in Pakistan, especially in Punjab. The Pakistan government knows that Interpol does not act in political cases. They know they cannot get the UN to declare Baloch leaders "terrorists".

All this gimmickry is only aimed to reinforce anti-Baloch propaganda at home just like similar claims were used against MQM earlier," Haqqani said in response to a query from this writer.

Haqqani while blasting Islamabad's move against Bugti, also tagged the Interpol headquarters in his tweet.

Husain has united Mohajirs, or immigrants from India, against the injustices of the Punjab and like the Baloch who are demanding freedom, the MQM is facing a military crackdown just for demanding a fair share in the federal cake.

Haqqani’s peer from his Karachi University campus days three-and-a-half decades back, Sardar Shaukat Kashmiri (who is now chairman of the United Kashmir People’s National Party and lives in exile in Switzerland) ridiculed Islamabad’s move and emphasised that the Geneva Convention, 1951, protects political refugees from vindictiveness of states.

“Interpol will not issue red warrant on behalf of such countries whose human rights record is worst and killings and kidnappings by security agencies are routine,” Kashmiri told the Baloch Houseblogspot.

Over the last decade, Pakistan has not tried even a single officer for war crimes in Balochistan. As many as 6,000 bodies of Balochs demanding freedom have been dumped all over Balochistan in the past seven years — Islamabad officially acknowledges 600 kill-and-dump cases. According to the Voice for Baloch Missing Persons more than 20,000 Baloch are victims of enforced disappearances.

Baloch human rights defenders report unconscionable torture methods, including cigarette burns all over the body, cuts on sensitive parts of the body, brutal sodomy, and pulling out of hand and foot nails.

“They are even feeding faeces to Baloch youths,” former Balochistan government minister Kachkol Ali Advocate, who also lives in exile in Oslo, told this writer.

The red notice against Bugti and his aide was ostensibly issued on the orders of Pakistan’s home and narcotics control minister Chaudhry Nisar Ali Khan, who was criticised last month for meeting Islamist radicals. It is apparent the orders came directly from the army GHQ that calls the political shots in Balochistan.

Just last fall, there were media reports that Brahumdagh Bugti will be travelling to India to a hero’s welcome after the speech of Indian Prime Minister Naredra Modi at the historic Red Fort in solidarity with Balochistan.

Canadian author Tarek Fatah, who lived in Pakistan for many years and is now an Indian celebrity hated by diehard Wahhabis and Pakistan mediapersons like Najam Sethi and Hamid Mir alike, lamented on Twitter: “As India vacillates, Pakistan asks Interpol to arrest Balochistan exiled leader Brahumdagh Bugti. Wake up India.”

Haqqani too counselled, “It would be better if, instead of gimmicks against leaders of various nationalist groups, the Pakistan government devotes its energy to pursue Islamist terrorists who are the real threat to both Pakistan and the world.”

Also read: India needs to be cautious on granting asylum to Baloch leader

#Balochistan, #Pakistan, #Brahumdagh Bugti
The views and opinions expressed in this article are those of the authors and do not necessarily reflect the official policy or position of DailyO.in or the India Today Group. The writers are solely responsible for any claims arising out of the contents of this article.