New Delhi's strategy to fight Islamabad's proxies within its own borders has not yielded the desired dividends.

The ambush of the CRPF bus near Pampore on June 27, 2016 by LeT operatives and the spurt in encounters with terrorists in Kashmir Valley recently show that Pakistan’s proxy war against India is continuing unabated.

In order to reduce casualties and damage to property, and improve the investment climate, India’s response needs to be reviewed and upgraded.

Despite facing seemingly insurmountable internal security challenges, the Pakistan army and the ISI – together constituting the "deep state" – have been engaged in a low-intensity limited war against India for almost three decades. 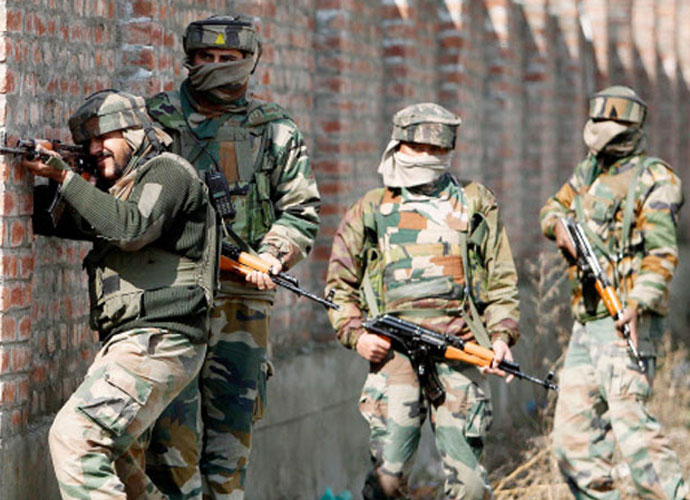 Spurt in encounters with terrorists in Kashmir Valley recently show that Pakistan’s proxy war against India is continuing unabated.

Pakistan’s deep state is continuing to sponsor terrorist attacks not only in India but also against Indian assets in Afghanistan through extremist organisations like the LeT and the JeM.

Incidents like the terrorist strike at the Pathankot air base in January 2016 and Pakistan’s proclivity to remain in denial even though hard evidence of the involvement of organs of the state is given to it, are exhausting Indian patience.

A single miscalculation could lead to conflict between the two nuclear-armed neighbours.

India’s carefully calibrated strategy to fight Pakistan’s proxies within its own borders and on its own side of the LoC, in order to keep the level and the intensity of conflict low and maintain a stable environment for rapid economic growth, has not yielded the desired dividends.

For the Pakistan army it is a low-cost, high-payoff option to keep several divisions of the Indian Army and a large number of Central Armed Police Forces (CAPFs) embroiled in conflict.

For India the opportunity costs have been prohibitively high in terms of the strain on the defence budget and slowing down of the rate of growth, for example, because of the decline in tourism in J&K.

The remaining roots of Kashmiri militancy are now in PoK and Pakistan, but eliminating these though military means is not a viable option.

India should pursue a four-pronged strategy to gradually force Pakistan to stop waging a proxy war against India.

Firstly, India should continue to engage the elected civilian leadership of Pakistan with a view to gradually resolving the seemingly intractable disputes between the two countries and reducing the salience of the Pakistan army in the country’s polity.

India should also engage members of Pakistan’s civil society and senior veterans of its armed forces who are amenable to seeing reason as they wield considerable influence with the generals in command.

Secondly, India should simultaneously "hit to hurt" the Pakistan army on the LoC where it is deployed in large numbers and can be easily reached.

For every act of terrorism on Indian territory for which there is credible evidence pointing to the involvement of or sponsorship by the Pakistan army and the ISI, carefully calibrated military strikes must be launched against the Pakistan army.

These should include artillery strikes with guns firing in the "pistol gun" mode to destroy bunkers on forward posts with minimum collateral damage; stand-off PGM strikes on brigade and battalion HQ, communications centres, logistics infrastructure, ammunition dumps and key bridges; and, raids by Special Forces and Border Action Teams (BATs).

Thirdly, if Pakistan continues to drag its feet in bringing to justice the leaders of terrorist organisations against whom hard evidence has been provided by India, covert operations should be launched against them.

These should be based on hardcore "actionable" intelligence and should be sanctioned at appropriate levels. Covert operations are certainly a game that two can play, but the deep state leaves India with few other options.

In any case, Pakistan’s ISI has been conducting covert operations in India for long.

Since Pakistan is not inclined to bring to justice the leaders of terrorist organisations like the LeT and the JeM, terrorists whom they call "strategic assets", they must be neutralised through covert operations.

Finally, along with overt military measures and covert operations, India’s growing diplomatic clout must be harnessed to influence the outcome by isolating the Pakistan army internationally as a rogue army due to the acts of terrorism that it perpetuates along with the ISI.

The international community that is already tiring of Pakistan’s shenanigans in Afghanistan, will not need too much convincing to accept that the time has come to stop mollycoddling the Pakistan army on the grounds that it must be supported in order to ensure that its nuclear weapons do not fall into Jihadi hands.

Instead of wining and dining the military leadership, the international community must censure the Pakistan army in the strictest possible terms and give it six months’ time to stop destabilising its neighbours.

Failing satisfactory progress, the United Nations Security Council (UNSC) should be approached to approve an embargo on the sale of arms, ammunition and military equipment to Pakistan.

If the UNSC resolution is vetoed by China, as it well might be, India should use its buyers’ clout in the military industrial complex to ensure that arms manufacturers that supply weapons and defence equipment to Pakistan stop doing so.

India should lobby extensively with the US political leadership and the members of the US Congress to apprise them of the fact that continuing US support for the Pakistan army is hurting the growing Indo-US strategic partnership because military aid strengthens the Pakistan army and gives it greater confidence to destabilise its neighbourhood with impunity.

This four-pronged strategy should succeed in bringing Pakistan’s proxy war to an end in one to two years. If it does not, it would be time to raise the ante and consider tougher measures such as the abrogation of the Indus Waters Treaty, as has been recommended by some analysts, but such a drastic step may not be necessary.

#Terrorism, #Kashmir, #India-Pak
The views and opinions expressed in this article are those of the authors and do not necessarily reflect the official policy or position of DailyO.in or the India Today Group. The writers are solely responsible for any claims arising out of the contents of this article.