They have been charged under the law despite not having expressed dissent against the government.

Universities have become the biggest threat to the government it seems. After tumultuous, widespread movements at Jawaharlal Nehru University, Hyderabad Central University, Jadavpur University and other universities, Panjab University is the most recent entrant into the list.

Student protests shook the varsity after a highly contentious fee hike was recently brought into force. The Panjab University administration increased the fees of various courses in March 2017, the hike being considerably steep.

As per the students' narrative, the university used to hike the fees by nearly 10 per cent every year, but since 2013, the successive increase has been steep and the current hike is unprecedented in many ways.

Panjab University is jointly run by the Centre and the Punjab government, with 60 per cent funds allocated by the former and the rest by the state. 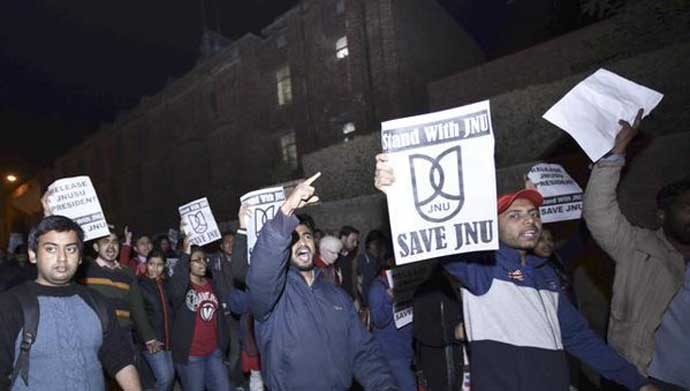 Sedition has also been the main protagonist of the all but closed JNU chapter in 2016. Photo: Facebook

As has been an issue with many other public universities, disputes and conflicts in the allocation of funds between the Centre and the state have left the varsity cash-strapped, one of the arguments used by the vice-chancellor of Panjab University to justify the fee hike. But two important interventions are required here.

If the vice-chancellor is indeed helpless, and if the fee hike was unavoidable, then why did he not take up the issue with the Centre by making use of the students' support?

Why do administrative heads always view dissent and critique with reprehension, but are wary of expressing solidarity with students?

It was the decision of the vice-chancellor and his administration to increase the fees, to such an exorbitant as also abominable extent. Why then is he taking refuge in this argument?

If this does not seem bizarre and incomprehensible, the matter has escalated for the worst.

Close to 66 students were charged with sedition, besides rioting as well as causing damage to public property.

It was at this juncture that the students were arrested, tear gas and water cannons unleashed on them followed by lathi charge by the police and stone-pelting by the students.

Sedition has also been the main protagonist of the all but closed JNU chapter in 2016, when students were booked under the draconian law for political dissent.

What is stranger in the case of Panjab University is the students have been charged with sedition despite not having expressed dissent against the government. Section 124-A of the Indian Penal Code covering sedition clearly states that whoever brings hatred, excites disaffection or either attempts to bring hatred or attempts to excite disaffection against the government shall be charged for the offence of sedition.

As logic would demand, the question was posed to the Chief Security Office of PU, who told the police that students raised "anti-State" slogans.

When asked what these "anti-State" slogans were, the officials said that the students raised derogatory slogans against the Panjab University, the University Grants Commission and the ministry for human resources and development.

Interestingly, and worryingly, sedition charges can now lead to arrests even though the fundamental elements required for the satisfaction of the offence are missing. Firstly, there is a world of legal difference between the words "Government" and "State".

Even if it may be the case that the PU, the UGC or MHRD come within the legal definition of "State" as per Article 12 of the Constitution, the clear and intentional usage of the word "Government" is sufficient to limit the scope of sedition.

The events unfolding in Punjab assert, testify and reinforce certain facts for us: sedition has effectively lost its importance, assuming it ever had any, and has become nothing more than a joke of a provision deployed as a whiplash by governments and law-enforcement agencies.

University heads such as vice-chancellors and registrars shall always make it a point to engage with students as little as possible and run institutions from the moral high horse that they wish to ride. True to form, Panjab University vice-chancellor refused to give the student body an audience, let alone work constructively to address their queries, grievances and concerns.

What good is a vice-chancellor who does not make the pressing needs of students his priority? The last few years have seen a score of student movements against fascist administrations and the reasons are almost glaring.

The culture of administrations, especially that of registrars and vice-chancellors, requires them to carry on with their work, in the gloated parochial assumption that they know best and that any dissent, resistance or critique must not be engaged with unless the situation goes out of control.

At the juncture of losing control, they may adopt the appeasement method to placate sentiments temporarily or lash out aggressively. Both methods are bound to fail in all likelihood.

It is high time that university administrations realised that unless there is a constant, healthy, intellectual and honest conversation between the administration and students, there will always be a sordid gap that alienates students.

If this does not serve as a wake-up call for university administrations to work on addressing the discontent among students, it may be well be too late soon.

Also read: Why we need to worry about ABVP's 'nationalism'

#UGC, #Sedition, #PU, #Panjab University
The views and opinions expressed in this article are those of the authors and do not necessarily reflect the official policy or position of DailyO.in or the India Today Group. The writers are solely responsible for any claims arising out of the contents of this article.