Why CM Pinarayi is on the backfoot

LDF has to realise that there is no political space for violence in Kerala. The new generation in Kerala doesn’t like violence, brutality or oppression. Their sympathy goes with the victims.

Kerala Chief Minister Pinarayi Vijayan is known for outsmarting his rivals with his rare political instincts and ability to weather storms.

He had made his mark over the last three years since he has headed the CPI(M)-led Left Democratic Front government in Kerala. After heading the Kerala CPI(M) for 17 years, Pinarayi handled the government and party affairs with cool — prescribing remedies for every issue that cropped up before him. Kerala found a firm and strong leader in Pinarayi and believed in his capacity to bring in qualitative changes in developing the state on fast mode.

He also put up his best to change governance and people’s mindset. He handled Cyclone Ockhi, the Kerala floods and the Nipah outbreak, in close succession, in an exceptionally brilliant manner even as the media ran a campaign against him.

His delivery mechanism impressed cynical Keralites and Pinarayi was rated as the only politician with credibility. Pinarayi enjoyed his term in government when the Opposition was in disarray. But the Lok Sabha poll results changed the state’s power equations in Kerala. Soon controversies rained one after the other putting making the CPI(M) go on the defensive. First, it was CPI(M) state secretary Kodiyeri Balakrishnan’s son, whose name came up in a sexual abuse case in Mumbai. Kodiyeri defended his position by saying that he has never protected his son or intervened to save him in the case. Pinarayi has the ability and track record of bouncing back from ruins in his political career.  However, for the first time in his career, he could not take remedial measures or chalk out a new action plan after the 2019 Lok Sabha polls.

“[The] 2019 poll debacle was a shock for us. We never anticipated such a humiliating defeat. Chief minister heavily banked on reports from his loyalists and was under the impression that we had better chances than Congress. Now he is paying a price for believing people around him,” a senior CPI(M) leader revealed.

It’s not the poll debacle that is bothering Pinarayi today. His party and fans have become a liability for him. The late Communist leader Jyoti Basu had encountered a similar situation in the last leg of his government in West Bengal. The Kerala situation may not be similar, but the CPI(M) lost credibility and followers after the Pinarayi government facilitated the entry of women activists below 50 years of age to the Sabarimala Temple.

Now, the CPI(M) Central Committee has observed that mishandling Sabarimala wrecked LDF in Kerala and was instrumental in massive vote drain. The CPI(M) knew that with 31.88 per cent vote share, it won’t survive the 2021 Assembly polls. 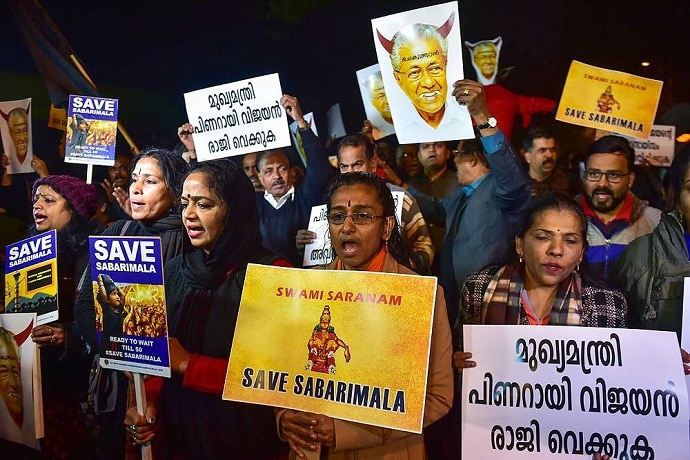 Twisting traditions and voter sentiments did not bode well for LDF. (Photo: PTI)

Despite best governance practices and corruption-free governance, the LDF lost 11.60 per cent vote share during the last three years of Pinarayi’s rule.

The party has to realise that there is no political space for violence in Kerala. The new generation in Kerala doesn’t like violence, brutality or oppression. Their sympathy goes with the victims.

The murder of TP Chandrasekharan damaged the party to the core; Periya twin murders of Youth Congress workers ruined the chances of CPI(M) candidates in Malabar in the recent Lok Sabha polls. Even the CPI(M)- BJP clashes and murders put the party in a danger zone. The people of Kerala look to CM Vijayan to design a system in his party to disown criminals.

#Kerala flood relief, #Nipah, #Chandrasekharan, #Sabarimala shrine
The views and opinions expressed in this article are those of the authors and do not necessarily reflect the official policy or position of DailyO.in or the India Today Group. The writers are solely responsible for any claims arising out of the contents of this article.

Senior journalist who has been working for 31 years and covering issues related to politics, environment and health.