No hope for Pranab. Who can Modi trust for President's post?

It will take a BJP candidate to assuage the uncertainties that always plague the PM.

Come July 2017, the country's second most coveted job will be up for grabs. It's unlikely that the incumbent, President Pranab Mukherjee, will get a second term.

This despite the fact that Mukherjee has signed a record number of ordinances including the contentious and later withdrawn Land Acquisition Bill (LAB) and the embarrassment of the imposition of President's rule in Uttarakhand. 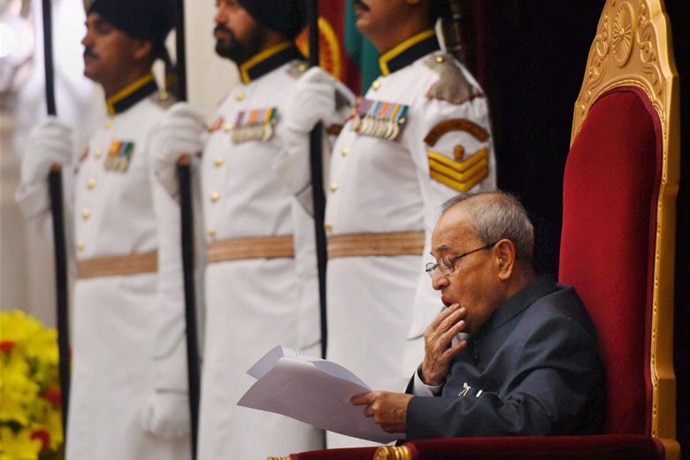 It's unlikely that incumbent President Pranab Mukherjee will get a second term.

And political heavy weights in the ruling BJP, reading the tea leaves, have started unprecedented, no holds barred, fierce lobbying for the job. The contenders include former BJP president Venkaiah Naidu, who has suddenly discovered that Prime Minister Narendra Modi is an "avatar" and "god's gift to India" and the influential RSS apparatchik, BJP general secretary Ram Madhav. He is credited with winning Assam for the BJP and having a huge influence in the MEA. Madhav has also handled the BJP's NRI outreach and been one of the organisers of the PM's rockstar-like performances abroad.

Meanwhile, minority affairs minister Najma Heptullah is eyeing the vice-president's job, having had a track record of running the Rajya Sabha for years. After the induction of the professional Gandhi family baiter Subramanian Swamy in the Rajya Sabha, this will be another affront for the dynasty as Heptullah defected from the Congress.

With all the contenders having made the ritual trip to Nagpur or Jhandewalan to genuflect before Sangh supremo Mohan Bhagwat, political observers witnessing the heavy-duty power play say that the RSS is yet to speak for or veto a candidate.

An audacious plan to "do a Kalam" and nominate Amitabh Bachchan and torpedo political rivals has had to bite the Panama papers bullet. Vice president Hamid Ansari's upgradation is curtly ruled out by government sources. They say the base would revolt. Ansari has been attacked by senior BJP leaders on several occasions and even had his patriotism questioned.

Given a chance, all senior ministers would head to Rashtrapati Bhawan or even become CM. Take the case of defence minister Manohar Parrikar, who spends every weekend in Goa and has confided to many that he would love to have his old job as CM back.

The choice for the next president will be crucial for the BJP as the candidate will tackle very sensitive issues close to the 2019 general elections.

The BJP trimurti is unlikely to back anyone they don't trust completely. And, despite Mukherjee having been a disappointing president to those who wanted him to be a moral beacon to the government, he is not going to earn another term.

A senior Congress leader says: "Be it intolerance, lynching or when an entire campus was branded anti-national, the president could have been a tempering voice of reason. Besides one tepid intervention, he has kept mum. Take the case of JNU - the president is the visitor to every national university and yet he did not say a word? A political system and a government fail when they call a university anti-national, but not a word."

That house on top of Raisina Hill is not just symbolic of India's might, but also a guiding light for governments.

Unfortunately, the Congress by appointing the undeserving Pratibha Patil as president lowered the lustre of the post. P Chidambaram as home minister had even snubbed her demand for crores to do up her post-retirement home in Pune.

This was the first time in the history of the republic that a president's outrageous demands were refused. A Congress wryly says: "Sonia Gandhi was reluctant to nominate Mukherjee and she seems to have proved right. History will award him Patil grades".

So who will follow Mukherjee? Clearly, it has to be a person Modi trusts and is comfortable with. That rules out external affairs minister Sushma Swaraj, who would otherwise be a perfect candidate.

Naidu, meanwhile, has been burnishing is credentials to the point where he seems to have impulsive control issues when it comes to lavishing praise on Modi. But, that's part of his plan. The fact that he's from Andhra Pradesh is also a plus, notwithstanding his complete lack of mass base.

Even as president, he would defer to Modi and could be projected as part of the BJP and the Sangh's long gestating outreach to the south. Another candidate considered a dark horse, who could overtake many is Ram Madhav. Bubbling with ambition, he matches Naidu's qualifications and is already demanding a Rajya Sabha seat, which he is likely to get. However, Madhav is aiming higher; he fancies himself the Henry Kissinger to Modi's Nixon and a "heavy weight RW foreign and policy expert" who wants a job befitting his stature.

Says an academic amused at the right-wing preening, "Attack us, call us names, but at least write one academic book, explore a new idea, give us citations. A man who is RW emeritus and has been nominated to the Rajya Sabha under the category of 'writer' has not written a single book. Not even a pamphlet."

His entire career, such as it is, has been about sucking up to Jaitley and being his eyes and ears. This is the crucial problem of the BJP - a lack of heft and a serious lack of intellectual bench strength. The latter is evident in the much anticipated and never-happening Cabinet reshuffle. "Difficult to keep shuffling jokers in a pack of cards," says a minister.

The lure of the 500-room presidential palace is such that senior politicians' eyes gleam when they think of being "Maha maheem". Take Sharad Pawar, the man who has wanted to be PM since he was 40.

He would love to get the second most important job, but the way the scenario is unfolding, it will take a BJP president to assuage the uncertainties that always plague the PM.

#Rajya Sabha, #Pranab Mukherjee, #Race for President
The views and opinions expressed in this article are those of the authors and do not necessarily reflect the official policy or position of DailyO.in or the India Today Group. The writers are solely responsible for any claims arising out of the contents of this article.