Presidential election 2017: Why BJP will give these four Opposition choices a pass

The ruling party wants to ensure that the president be elected not just by consensus but also minus any controversy.

The ruling BJP-led NDA is moving towards electing a president by consensus. To that end, it constituted a three-member committee to hold consultations with not just all its alliance partners but also the Congress-led Opposition. NDA may even be open to accepting some names which the Opposition suggests. However, it would not agree on the candidature of at least three-four names to be proposed by the Opposition.

BJP is moving ahead cautiously to ensure that the president be elected not just by consensus but also without raising any controversy. Hence, two days before the Election Commission issued a notification on June 14 over the election process, the BJP constituted the committee comprising Union home minister Rajnath Singh, finance minister Arun Jaitley and urban development minister M Venkaiah Naidu.

The BJP’s committee showed an urgency of purpose. The Opposition’s 10-party sub-group was scheduled to meet over discussing the presidential election on Wednesday, June 14, afternoon. Rajnath and Venkaiah pre-empted the Opposition’s meeting by getting together in the morning even though Jaitley was away.

Besides reportedly briefing Prime Minister Naremdra Modi over the issue after the meeting, the two BJP ministers also reached out to the Opposition. They declared that they would meet Congress president Sonia Gandhi and CPI(M) leader Sitaram Yechury on June 16. They also spoke with Nationalist Congress Party (NCP) leader Praful Patel and Bahujan Samaj Party (BSP) Rajya Sabha MP Satish Chandra Mishra over the phone.

The NCP supremo and PM Modi have mutual admiration. And they do not have any qualms about displaying their bonhomie in public. The PM admires Pawar because at a time when all UPA ministers had boycotted him after the Gujarat riots, Pawar was the only one who stand by him.

On an invitation from Pawar, PM Modi visited Vasantada Sugar Institute (VSI) in Manjari near Pune in November 2016 and lauded the NCP president as an “example” to others in public life. “I have personal respect for Sharadrao. I was Gujarat chief minister. He helped me walk by holding my finger. I feel proud to pronounce this publicly,” he said, congratulating Pawar for completing 50 years in public life in 2017. It was the second time in two years that Modi had visited an institution headed by Pawar and shared the dais with him. He visited Pawar’s hometown Baramati in February 2015 to inaugurate a Krishi Vigyan Kendra building. He also ate lunch at Pawar’s home.

The NCP supremo returned the compliments in equally glowing terms. He said, “I get surprised by the way Modi works. Yesterday, he was in Japan and in the morning he went to Goa. In the afternoon, Modi came to Belgaum and now he is at VSI. I don’t know where he is going in the night. This shows his total commitment to the cause of the country.”

Pawar also was one of the few Opposition leaders who had backed Modi’s demonetisation move.

Despite the bonhomie, PM Modi is unlikely to recommend Pawar’s candidature for the president’s post. Pawar’s name is linked to a number of controversies and corruption cases. He was named as a beneficiary in a stamp paper scam by convicted criminal Abdul Karim Telgi during a narco analysis test.

In 2007, BJP had demanded Pawar's resignation for his alleged hand in a multi-crore scam involving wheat imports. Pawar’s name is also involved in the controversial Lavasa Lake City project in Maharashtra. He allegedly demanded compensation for allowing the planned city.

The former Lok Sabha Speaker has a clean record. The senior Congress leader is also the daughter of freedom fighter Jagjivan Ram who was the deputy prime minister in the Morarji Desai government. Before it was formed in 1980, BJP was part of the Janata Party government. Meira Kumar belongs to the Scheduled Caste (SC) category.

However, PM Modi apparently has a better candidate in Jharkhand governor Draupadi Murmu, who is not just a woman but who also belongs to the Scheduled Tribe (ST) category. India has already had an SC president in KR Narayanan in 1997 and a woman in Pratibha Patil in 2007. But India has never had a president belonging to the ST category. 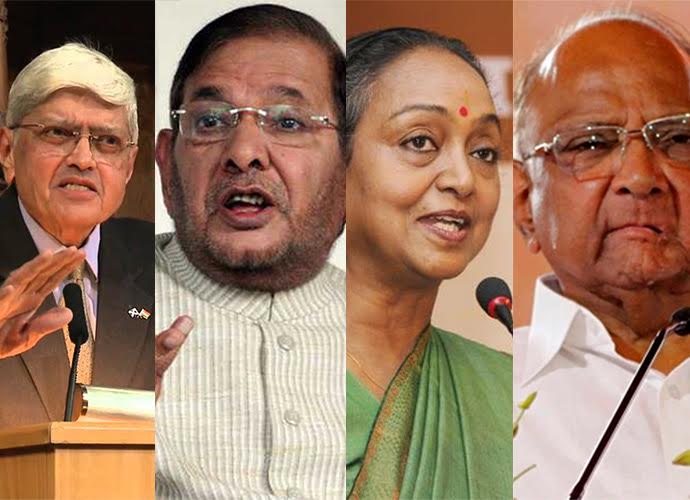 If at all the Opposition suggests Meira Kumar’s name, BJP may spring Murmu’s name as a better alternative.

The Rajya Sabha MP and former JD(U) president’s name is doing the rounds as a probable candidate of the Opposition. Yadav is a former Union minister and has a long parliamentary career. An acolyte of Jayaprakash Narayan, he was active during Emergency in the mid-1970s.

Sharad Yadav has courted controversies on several occasions for making sexist remarks. Ahead of the Assembly elections to five states earlier this year, he made a bizarre analogy between the “izzat” (honour) of a vote and a woman. “Honour of vote is bigger and important than honour of daughter,” he said at a function in Patna.

In 2015, while discussing the Insurance Bill, he said in the Rajya Sabha, “The body of women from south is as good as beautiful they are. They (women) in our region are not that good as those (in south) know dancing.”

Modi would not like to see someone on the president’s chair who carries an impression of not according due respect to women.

On the other hand, the PM is known to be promoting gender equality and has even launched "Beti Bachao, Bati Padhao" campaign with gusto.

Former West Bengal governor Gopalkrishna Gandhi is the front runner among the probable candidates reportedly shortlisted by the Opposition so far. The grandson of Mahatma Gandhi has already got the support of the Left. He is a retired IAS officer and a diplomat.

However, being a "Gandhi" may go against him as far as getting the support of NDA is concerned. He is known to be rabidly anti-BJP and RSS. This may not allow Modi to agree to his candidature. The ruling BJP seems to have got a hint of the likely consensus being built in the Opposition for Gandhi's name.

BJP president Amit Shah courted a controversy when he used the term "bahut chatur bania" (a very clever trading caste) for Mahatma Gandhi in Raipur on June 9. He was referring to Mahatma Gandhi as a clever person who used Congress as a tool just to gain independence and wanted the party to be disbanded subsequently.

Also read: Why PM Modi won’t pick any of these 7 leaders for president of India's post

#President of India, #2017 Presidential Elections
The views and opinions expressed in this article are those of the authors and do not necessarily reflect the official policy or position of DailyO.in or the India Today Group. The writers are solely responsible for any claims arising out of the contents of this article.