Priyanka Gandhi's entry into politics is most exciting

Why do I say so, despite being a strident critique of the lapses of UPA-II, in which Congress was the dominant player?

It has happened. It should have happened years ago. Priyanka is launched on the stage of Uttar Pradesh (nee, national) politics.

A welcome sign that the Congress is beginning to think tactically and sensibly.

Priyanka, unlike Rahul, is not a Stephanian. She chose to attend Jesus and Mary College, instead.

Why do I, a former Principal of St Stephen's, mention this in her favour?

Because I am embittered with the institution, now that I am retired?

No! There is no other institution I love more than my Alma Mater.

Priyanka's decision to forego a coveted label is a significant pointer to who she is. 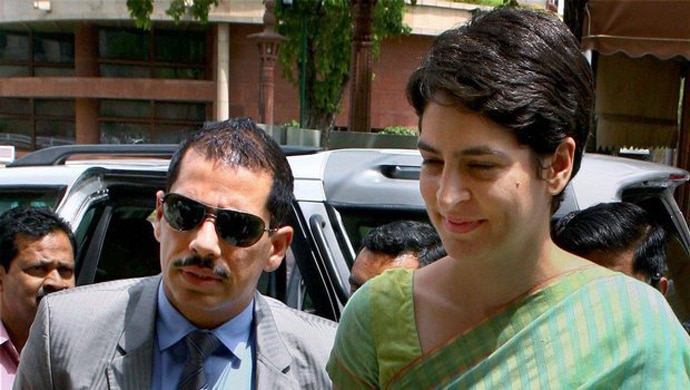 Am I worried about the Vadra factor? Of course I am. I wish this cloud were not there in the background. Photo: PTI

Most aspirants choose St Stephen's attracted, first, by the glow and reach of its label.

I'm not saying that academic considerations are superfluous. They are not; but serve mostly as a foil to the jewel of prestige.

Priyanka's decision to pursue her studies quietly, unnoticed by others (I bet, not many know that she studied in J&MC), offers a relevant insight into her character and, hence, into the secret of her charisma.

She is not one to shine in borrowed robes. She will not be a parasite on ready-made advantages.

Now, on to another aspect of her personality, which too is hardly known.

Priyanka used to work in cognito as a volunteer in an orphanage in Delhi. Princess Diana too used to do philanthropic work elsewhere during the same period.

But a young, charming girl was, in Delhi, doing dedicated and soulful humanitarian work, un-smelt by the media and unknown even to many in her social circles.

I know it from the authorities of the orphanage that she insisted on the confidentiality of her service. She knew that publicity and sincerity could not mix.

Priyanka served as a volunteer for years in this charity, deriving joy and fulfilment from serving unwanted children.

These facts are helpful in understandings why Priyanka moves hearts. She is a rich and radiant heart.

She is free from the stain of spuriousness and hypocrisy. She embodies the power of sincerity.

Priyanka signals the upswing of romanticism in Indian politics. The hallmark of the romantic sensibility was sincerity.

It is my conviction that she is unrivalled in this respect by any other on the political canvas of our country.

We are free to prefer power over sincerity. But we can no longer pretend that the choice does not exist.

I am not anybody's fan.

At the same time I do claim for myself the freedom to speak my convictions.

You want proof for the power of sincerity? Wait for the reactions of those in the power-paradigm camp. I make a prediction.

In the days ahead, every effort will be made to abort the emergence of this alternative - the alternative to brute power - in the horizon of our political choices.

It should not be misunderstood as a clash of personalities: it will be a clash of political cultures.

In the meanwhile, let me assure my readers: The entry of Priyanka Gandhi into politics is the best news we've had in a long while.

Why do I say so, despite being a strident critique of the lapses of UPA-II, in which Congress was the dominant player?

Priyanka embodies, in a refreshing and reassuring way, the sense and sensibility of being authentically feminine.

It is my confirmed and informed conviction that the bane of Indian politics is the tyranny of the male principle.

Macho has been our ascending political cult and it has reached its apogee in Modi, who exudes power and drives our collective destiny like a mythological charioteer.

A charioteer sees the track and the distant destination, but is blind to the plight of the people along the way. Woe unto you, if you happen to be caught under the wheels.

Such has been the dominance of the macho in our political imagination that the highest tribute we could pay to Indira Gandhi was that she was the "only man" in the Congress party! Now, a small insight from anthropology.

Historically, the male has been the monopolist of what, in technical terminology, is called "exploit".

Hunting, for example, is a typical male exploit. So is war. War and violence are expressions of the male principle. Women too may condone war and justify violence.

But they do so, not as women but as she-men, or co-opted imitations of men.

In the genre of politics dominated by the male principle, women and children are victims.

As in war, for example. Men fight. Its brunt falls on women and children. The sorrows of mothers and wives, as Shakespeare says, strike heaven on the face.

The female principle, in contrast, embodies care and compassion, not cruelty.

She mothers mankind. She cares and nurtures. She is the Ganga of life.

There is no man who has not drunk of its living waters. Yet, in him, this very river of life turns, somehow, into a thirst for blood.

The "authentic-she" alone, I ardently believe, embodies the counter-paradigm to the political culture that mankind (as opposed to humankind) has developed over the millennia, distinguished by war, bloodbath, cruelty, oppression and corruption.

This is not a biological or physiological bias. It is a spiritual truth.

Deep down every human being knows this, except that this thirst is not spelt in the lexicon of man-made politics.

So it remains as a deep and suppressed longing.

Traditionally, we associate courage only with the male. We cannot be more stupid than this!

As a man, I dare to believe and to testify (fighting my manly timidity) this to be true courage.

The female principle alone blends courage with justice. A mother's heart goes out more to the weakest among her children.

Translated into political idiom, she will not prefer, as Justice Krishna Iyer wrote, the billionaires among her children and sacrifice the welfare of billions to inflate their greed.

Only the ascendancy of the female principle will rehabilitate the long-disenfranchised social justice in the oeuvre of our political culture.

Till then we shall rest with the male hypocrisy of tokenism, and the crumbs that fall from the master's bounteous table.

So, it is not Priyanka, the daughter of so-and-so that we hail.

We shall not compromise vis-à-vis the dynastic principle. We should not welcome Priyanka only because is the daughter of a distinguished political family.

At the same time, the dynastic principle should not work in the reverse against her either. She should not be discredited for where she was born, which she could not have helped.

Am I worried about the Vadra factor? Of course I am. I wish this cloud were not there in the background.

Should we convict Priyanka without giving her an opportunity to prove herself because of her husband?

Certainly not. That will be the height of injustice.

We should leave it to Priyanka to sort out the likely tension between her love for the people of India and the dissonance that her plight as a wife could occasion.

That will be the litmus test of her authenticity as a woman in public life.

Every woman has to cope with this dilemma: the tension between her role as a wife and her duties as mother.

It is there; but we seldom talk about it because it is universal and also because it is mostly the woman's headache. She adjusts.

What happens in homes happens also in nations.

Whether Priyanka has the sagacity and the sense of purpose - the female heroism of standing caringly by a people in distress - time alone will tell.

In the meanwhile, we rest in hope and eager expectation. For the time being, we are grateful for the hope it affords!

#Congress, #Assembly elections 2017, #Priyanka Gandhi
The views and opinions expressed in this article are those of the authors and do not necessarily reflect the official policy or position of DailyO.in or the India Today Group. The writers are solely responsible for any claims arising out of the contents of this article.