No, Congress, introducing Priyanka Gandhi Vadra will not help you. Here's why

Congress should abandon the conceit that the arrival of a member of the Nehru-Gandhi dynasty is enough to solve their crisis. Their issues, and their purported tactics, are far more worrying than that.

The announcement of Priyanka Gandhi Vadra’s formal foray into politics and her appointment as the General Secretary of Uttar Pradesh East in the Congress is not only the latest offering from the doyens of dynasty politics in India — it is also the newest salvo from the Congress to subvert the average Indian voter.

The Congress should abandon the conceit that the introduction of a member of the Nehru-Gandhi dynasty is enough to solve their crisis. The ushering-in of the only remaining Nehru-Gandhi scion is being hailed as an infusion of the fresh blood that is going to turn the upcoming 2019 Lok Sabha Election on its head.

Up until now, one usually saw Priyanka Gandhi Vadra once every five years or so, campaigning for her brother or mother in Amethi or Raebareli in Uttar Pradesh, or at some unmissable event on the capital’s social calendar. Perhaps it was this flirtation with the political that led to even some senior journalists dismissing Priyanka more or less as non-serious.

A few days before the anointment of Priyanka Gandhi Vadra though, a senior Congress leader, Kapil Sibal, attended an event in London where a self-proclaimed cyber expert, Syed Shuja, alleged that the BJP had won the last General Election by hacking into Electronic Voting Machines (EVMs). 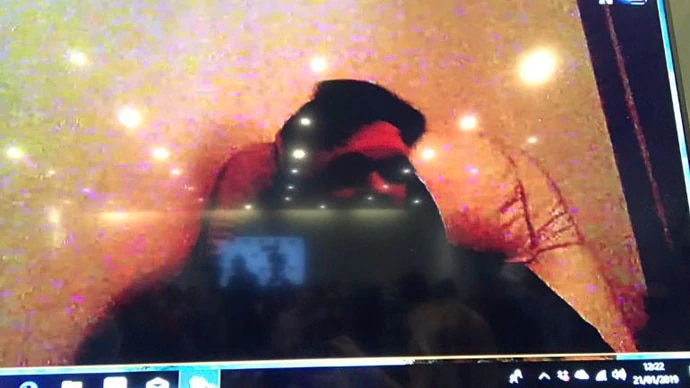 Masked Wonder: Is the Congress embarrassed by how swiftly the Foreign Press Association disassociated itself from Shuja’s claims? (Photo: India Today/Twitter)

The event, publicised as an ‘EVM hackathon’, had attracted the press, including members of the Foreign Press Association, London, the oldest association of foreign journalists in the world that provides official journalistic accreditation to more than 1,800 international correspondents annually — but with each moment, the claims of Shuja, who had joined in via Skype, appeared to be conspiracy theories being peddled without a shred of evidence.

It’s telling that Sibal, who was present there apparently in his ‘personal capacity’, was seen earlier in 2018 as reportedly one of the frontrunners for the impeachment motion against former Chief Justice Dipak Misra.

The Congress party’s continued attacks on the institutions upholding the tenets of India’s democracy, via constant attempts at doubting their sovereignty, ought to be questioned more by mainstream media.

Would it too much of a stretch to imagine that Priyanka Gandhi Vadra’s appointment was just to deflect the backlash coming the Congress’ way post-the 'EVM hackathon' that fell resoundingly flat?

The clear attempt to discredit the electoral process in the world’s biggest democracy, on an international stage at that, is a direct attack on the Election Commission of India (ECI). The ECI has routinely claimed that EVMs are tamper-proof and have already written to the Delhi Police seeking the filing of an FIR against Shuja. Kabil Sibal was at the EVM hackathon. But he was there, his party claims, in a 'personal capacity'. (Photo: Screengrab)

The Electronics Corporation of India Ltd (ECIL), the manufacturer of Electronic Voting Machines (EVMs), has also clarified that Shuja never worked with the company as he had claimed. What ought to be further damning for the Congress is how the Foreign Press Association disassociated itself from Shuja’s claims.

The party has managed to shift attention from the EVM hackathon fiasco now to Priyanka Gandhi Vadra or her acute ‘Indira Gandhi-ness’ — this vintage strategy is as obvious as calling water wet.

The disdain that the Congress seems to have for the average voter’s intelligence is apparent from the timing of the announcement — Ms. Gandhi-Vadra was apparently not even in the country and her brother, Rahul Gandhi, reportedly flew from Dubai to New York to convince her that her time to jump into politics was now.

The announcement succeeded in shifting focus from the EVM hackathon farce while, at the same time, it was also a message from the Congress to Mayawati and Akhilesh Yadav’s joining hands without them.

Priyanka Gandhi Vadra might not be able to trouble the BJP as much in Uttar Pradesh, but Rahul’s ‘behen’ would definitely take away something from ‘Bua-Bhatija’.

L’affaire Priyanka Gandhi Vadra can be succinctly summed by what Abraham Lincoln said, “You have to do your own growing no matter how tall your grandfather was.”

The problem, however, is that unheeding of the above, dynasts eventually run out of the patience people show them.

Post your comment
#SP-BSP alliance, #2019 Lok Sabha elections, #Rahul Gandhi, #Priyanka Gandhi
The views and opinions expressed in this article are those of the authors and do not necessarily reflect the official policy or position of DailyO.in or the India Today Group. The writers are solely responsible for any claims arising out of the contents of this article.