How government is aiding a separatist agenda in Punjab

Bapu Surat Singh Khalsa might be convinced of his righteous fight, but he is being used solely for the purpose of political agenda.

The images of an emaciated bare-chested grandfather in nothing but a saffron turban and flimsy pajamas have gone viral. Dismal and heartbreaking, they tell the story of 83-year-old Bapu Surat Singh Khalsa who has been on a hunger strike since January 2015, demanding the release of Sikh political prisoners. In his more than 265 days of hunger strike, the government has paid notice, enough to detain him three times over the course of these ten months and forcibly feed him. After his latest arrest, he is being kept in isolation in the advanced cardiac department of PGI, Chandigarh where even his family is not allowed to meet him. 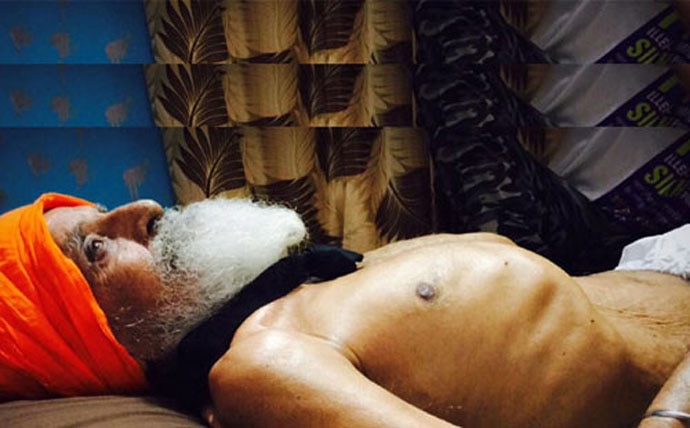 The innocent figure of Bapu Surat Singh Khalsa might be just what the separatists needed to light a spark with a just cause. (Photo courtesy: Khalsa Force.)

"The Sikh Sangat", as his supporters call themselves, were expelled by the police on their latest visit two days ago and think that the current DG of police Sumedh Singh Saini is biased against them: "They want to isolate him because they want to break him down, but Bapuji will not give up his resolve," says a person not wishing to be named, afraid that "they" will come for him if he is too vocal. "The Badal government has always been anti-Sikh, but we will cower down no more and we will speak up," he said.

The loss of an entire generation to political conflict is not something that the state ever recovered from. Punjab post Operation Blue Star has been waiting for revenge, patiently licking its wounds in far-flung countries under the guise of political asylum or laying low back home. Add to this, the misery of unemployment, drugs, poor agricultural facilities and even poorer governance that has rendered its pride futile and brought home feelings of unproductive shame instead.

Also read: How militancy in Punjab is on the brink of revival

A decade ago, everyone in the state understood the ramifications of declaring yourself a separatist. The human rights violations and violent excesses post 1984 and TADA made sure they drove home the point. But the millennials, they feel little for these things. Surrounded by the ugliness of no opportunity and feeling let down by their state, they look for inspiration in Bhindranwale, who now adorns the back of their SUV's and also has gangster rappers singing his lore. Looking at his picture and listening to his now almost mythical bravery gives these people a sense of pride, belonging and most importantly, purpose that they are lacking in their everyday lives. Will they fight against the system? Only time will tell. But slowly and surely, they are being groomed. They are different from the second-generation Khalistani's born and raised under asylum in different countries who identify themselves as "free people" and have been groomed for the idea of a Sikh state since they were born. Armed with a college education, these intellectual Sikh supremacists have been raised to take this fight forward. They know how to manipulate social media and create awareness for their cause.

Also read: How Punjabi filmmakers are back to glorifying Khalistani terrorists

When I first saw the first picture of Surat Singh Khalsa with a sentimental caption, as a practicing Sikh, I too was conflicted about it. But upon my investigation for this piece, I realised that most websites are deliberately using the minority hate rhetoric to rile people. After all, religion has always been the opium of the masses and it works every single time.

Bapu Surat Singh Khalsa might be convinced of his righteous fight, but he is being used solely for the purpose of political agenda. Everything from the way there has been a prefix of "bapu" in front of his name to his last name "Khalsa" are being used to groom young impressionable minds into the manipulative world of separatist hate politics.

Sikhs as a community have always been taken by the idea of sacrifice in the name of righteousness as their personal religious history is based on it. And the separatists are aware of it. For most of them, Bhindranwale is a martyr to be avenged. For almost two decades the movement has had no face, but the innocent figure of Bapu might be just what they needed to light a spark with a just cause.

43 Sikh prisoners have completed their terms and have been denied release. As of July 2014 the Supreme Court has stayed the release of life convicts across the country. If the state government tries, they can push the matter to the Union government who can appeal to the Supreme Court by filing an interim application, as the petitioner in this particular case is the Union of India. Since Badal is refusing to cooperate, this will probably play out for a long time.

Also read: The return of Bhindranwale

Meanwhile, Khalsa's son-in-law has been murdered in Chicago to silence him where he sought asylum in a bid to avoid TADA in the early 1990s for his active role in the Sikh Student Federation (SSF) during the conflict times. My only question at the end of this is, if Bapu Surat Singh Khalsa and his family were as innocent as they proclaim, why did they seek asylum in the US? Most Sikhs that have foreign escapes have been unable to come to terms with the fact that they were part of a terrorist movement in India which had serious repercussions for an entire community that they left behind.

#Khalistan, #Separatists, #Punjab
The views and opinions expressed in this article are those of the authors and do not necessarily reflect the official policy or position of DailyO.in or the India Today Group. The writers are solely responsible for any claims arising out of the contents of this article.