The poll-bound border state of Punjab is heating up with political events before D-Day. From ED raiding premises of the nephew of Punjab CM Charanjit Singh Channi, to AAP announcing its CM face for 2022 polls, a lot has happned in Punjab this week.

Here is a quick recap of 5 major political developments in Punjab this week:

So far, Rs 10 crore in cash has been recovered from Bhupender Singh, and Rs 2 crore from his associate Sandeep Kumar.

An ED official speaking to PTI said that the raid conducted is linked to a money laundering investigation against illegal sand mining in Punjab.

Speaking at a press conference earlier today, Channi said that his relatives are being taken into custody and grilled for more than 24 hours by the ED. He said that the Central agency is being 'used by the BJP' ahead of the polls. He also questioned why the relatives of Arvind Kejriwal were not being raided by the ED.

2. BHAGWANT MANN IS THE CM CANDIDATE OF AAP 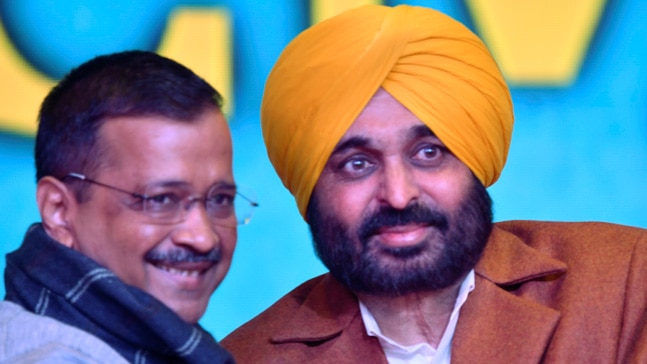 After much delay, Bhagwant Mann has been declared as the CM candidate of the AAP in the Punjab assembly polls 2022. On January 13, Arvind Kejriwal had asked the people of Punjab to send their CM choices to a number till 5 pm on January 17. It was the Janata Chunegi Apna CM drive by AAP. Kejriwal announced the results of the poll on January 18, saying 93.3 per cent of the people of Punjab voted for Bhagwant Mann as the CM candidate of AAP.

Arvind Kejriwal had been delaying the announcement of Mann for long. This also kept the two-time MP from Sangrur anxious, which he expressed to the party.

Mann, a well known film and TV comedian in Punjab, started his political journey in 2011 when he joined the People's Party of Punjab (PPP), formed by Manpreet Badal, who had broken away from Shiromani Akali Dal (SAD). He later merged the party with the Congress after his party failed to win any seat in Punjab Assembly elections.

Mann contested the 2012 Punjab Assembly election as a PPP candidate from the Lehra candidate, but stood third. He joined AAP in March 2014 and contested the Lok Sabha elections from Sangrur seat, where he defeated Akali strongman Sukhdev Singh Dhindsa by more than 2 lakh votes. The Congress party is playing safe in the Punjab Assembly polls as it has dropped only 4 sitting MLAs in its first list of 86 (out of 117) candidates announced so far. There were apprehensions in the Congress Central Election Committee chaired by party Chief Sonia Gandhi that the partymen denied tickets might join Capt Amarinder Singh’s new party Punjab Lok Congress. The party therefore played safe.

Among 17 out of 18 ministers retained by the Congress, four MLAs who were close to Capt Amarinder Singh have been given a ticket.

Among the Congress MLAs who were dropped included Harjot Kamal, the MLA from Moga. The seat has been given to actor Sonu Sood’s sister Malvika Sood Sachar, who joined the Congress on January 11, 2022.

The party also denied a ticket to Channi’s brother Manohar Singh, who resigned from his government service in the hope of contesting as a Congress candidate from Bassi Pathana.

In another rare development, the Election Commission (EC) postponed the polling date in Punjab Assembly polls from February 14 to February 20. CM Channi wrote a letter to EC saying that a large number of people, majorly from the SC community, would be going to Varanasi for Guru Ravidas Jayanti and requested the polling date to be postponed.

EC said that it did receive letters from organisations and political parties which said that a large number of people belonging to the SC community (around 20 lakh) would be travelling to Varanasi to celebrate Guru Ravidas Jayanti. Also, many devotees leave the city one week prior to the date. Hence, the EC decided to push the date, it said.

The Election Commission said that the new notification would be issued on January 25, and Punjab will go to polls on February 20. The counting of votes will take place on March 10.

5. NO ALLIANCE BETWEEN KEJRIWAL AND SSM

Arvind Kejriwal on January 12 had said that the alliance with SSM couldn’t be forged because the party was demanding 60 seats, The Tribune reported. Kejriwal said that he was willing to give 10-15 seats to the party as they had already announced candidates for 90 seats. He said Rajewal didn’t agree to this, and therefore the alliance fell through.

#Charanjit singh channi ed raids, #Punjab Polls, #Congress and sonu sood sister, #Bhagwant mann aap cm candidate
The views and opinions expressed in this article are those of the authors and do not necessarily reflect the official policy or position of DailyO.in or the India Today Group. The writers are solely responsible for any claims arising out of the contents of this article.