Spare us the drama: Fake rage aside, BJP has no answers on Rafale questions

As the government is caught on the back-foot over the French aircraft deal, the PM is silent. But he will soon hear the voice of the people on the issue.

This song kept playing in the back of my head yesterday as I watched in disbelief as the defence, finance and law ministers of our country avoided direct questions, faked righteous anger and did their best to obfuscate the truth about the royal mess that is known around the country as Rafale. 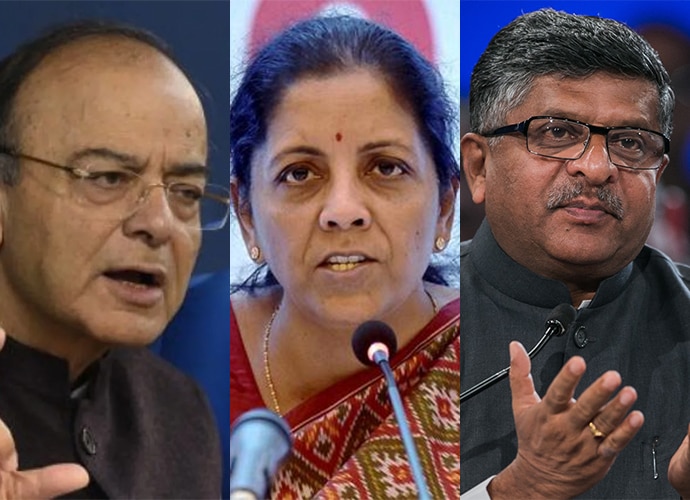 The BJP's 'trimurti' is trying its best to save the party from the Rafale fall-out. (Photo: DailyO)

The last few weeks on the Rafale rollercoaster have been fraught with accusations and counter-accusations. The latest rounds have come in quick succession as the defence minister’s comments on HAL’s lack of ability to build the Rafale Jets were refuted by the former chairman of HAL himself and the former President of France, Francois Hollande’s statement on India pushing Dassault to partner with Reliance were refuted by our finance minister who alleged a conspiracy between Rahul Gandhi and Hollande. Mon Dios! His Rafale revelations have been explosive. (Photo: Reuters)

Under UPA, a multi-year transparent international bidding process was undertaken for the 126 fighter jet requirement of the Indian Air Force. This involved multiple countries, many of whom spent millions of dollars of time and money, working with the government on clarifications, bids and negotiations. A major part of the open tender was the need for technology transfer to HAL and a large Make In India component. The process ended with Rafale as the winner and as the Indian government and Rafale started to hammer out the details and were close to the finish line of this long process, the Prime Minister apparently chose to ignore the live tender and contract and changed the rules of the game. The Rafale deal details have changed under his government, leaving the BJP open to big questions. (Photo: PTI)

In doing so, he not only left his colleagues and officers red-faced, but also earned the wrath of the international community which worked on the tender with the government in good faith.

I don’t think he will ever manage to get enough participation for an accurate price determination in future tenders.

A significant aspect of process that was ignored in the new Rafale deal was the clearance of the cabinet committee of security which cleared the deal post facto, once the PM returned from his trip to France. Furthermore, the Prime Minister during his visit to France reportedly changed the deal to exclude India’s only public or private enterprise to have built fighter planes in India for the Indian Air Force — HAL. Instead, somehow, out of nowhere, came a company so deep in debt and with so little knowledge in aircraft making, that Dassault just fell in love with them and surprisingly, all the little warranty and guarantee issues they were so publicly fighting with HAL over disappeared with this new partner. Lastly, the defense procurement policy clearly lays out the process for procurement and in particular, for offset contracts. As per the policy, vendors for offset contracts, irrespective of value, are to be proposed and cleared by the Indian side of the house — this means that Dassault could never have taken unilateral action in removing HAL and bringing Reliance on board. This means the trimurti of Arun Jaitley, Ravi Shankar Prasad and Nirmala Sitharaman are at best ignorant and apparently at worst, liars.

The Indian government has been visibly vague about the pricing of the 36 Rafale jets that are being procured in fly away condition. Prima facie, the price seems 300 per cent higher than the earlier deal. However, the finance minister has pointed to exchange rate differentials, price escalations linked to delays and additional equipment being procured as reasons for the escalation. He and his cabinet colleagues first claimed that any comparison between the earlier and current deals would be like comparing apples with oranges. Then, they said the price as per the parameters of the earlier deal are 9 per cent lower.

Mr Jaitley was right the first time. In scrapping a deal where the price was arrived at via a competitive bidding process, the Prime Minister has apparently left us with no objective way of comparing the earlier price with one that was arrived at in a backroom deal on completely different terms.

However, if it's any consolation, the government’s joint statement with the French announcing the new deal mentioned “better terms” for India than we had in the earlier deal.

I wonder if these better terms are a little bit like the “acche din” we have been waiting for.

All the major players in the Rafale deal are currently suffering a crisis of credibility. Let's start with the most obvious one — Anil Ambani — who is reportedly neck-deep in debt, never had any experience in the defence manufacturing business and managed to net a Rs 45,000 crore life-cycle contract with a company that was not old enough to file taxes. Then, there is the incorruptible former French President who allowed his partner to apparently take money from Anil Ambani for her cinematic adventures. Lest we forget, there is the extremely cheery defence minister who has done so many U-turns, she is ready to be the next Prime Ministerial candidate. Last and certainly not the least is the Prime Sevak Modi who has taken a vow of silence on the issue but is the source of all that is reportedly questionable in the deal.

Imagine if the CEO of a private company were to abandon a tender in favour of a private deal that is significantly more expensive and involves questionable partners. What would happen if that CEO were to tell his board of directors that he cannot reveal the specifics of this deal and that they would just have to trust him?

I think the answer is obvious to us all but will only reveal itself to the Prime Minister in May next year, when his board of directors — the people of this country — vote on his continuance or dismissal.

#Arun Jaitley, #Ravi Shankar Prasad, #Nirmala Sitharaman, #Rafale Deal
The views and opinions expressed in this article are those of the authors and do not necessarily reflect the official policy or position of DailyO.in or the India Today Group. The writers are solely responsible for any claims arising out of the contents of this article.