The political space, govt or opposition, is forever up for grabs. The Congress can afford to miss this truth at its own peril. Rahul Gandhi certainly has not understood it.

Democracy is not a god-given fact. Modern democracies have been historically created. The history of democracy is of social struggles, undertaken sometimes with weapons, at other times, with ideas and ideologies, over the expansion of political space.

But Congress leader Rahul Gandhi, who resigned as the president of the party after the 2019 national election debacle, thinks it is easy to be in the opposition.

This is the umpteenth time he is wrong.

On a visit to Amethi, a constituency he lost to the BJP's Smriti Irani in May, the Congress leader told party members on July 11, "Narendra Modi is Prime Minister, Yogi ji is Chief Minister & Member of Parliament is from BJP (Smriti Irani). We have to do the work of opposition now, it is the most enjoyable, it is easy."

#WATCH Rahul Gandhi, Congress in Amethi: Narendra Modi is Prime Minister, Yogi ji is Chief Minister & Member of Parliament is from BJP (Smriti Irani). We have to do the work of opposition now, it is the most enjoyable, it is easy. (10.7.19) pic.twitter.com/Gg6zFQr4hE

Rahul Gandhi doesn't have to look too far to know just how difficult being in opposition actually is. The same day when he was making this statement in Amethi, his party colleague DK Shivakumar was showing how to play opposition politics right.

Shivakumar is the man the BJP fears in Karnataka. In a bid to save the Congress-Janata Dal (Secular) alliance from breaking, Shivakumar reached the Renaissance Mumbai Convention Centre Hotel, where the 10 dissident JD(S)-Congress legislators have been staying since July 6.

The rebels had earlier approached the Mumbai Police, saying they felt "threatened" by their state leaders and did not want to meet them in this regard.

Visibility for political leaders is as important as for film stars — if not more. People need to see politicians slugging it out in the political arena. Against the hostile context, Shivakumar thus spent the day outside the Mumbai hotel — before being taken away and detained by the police. 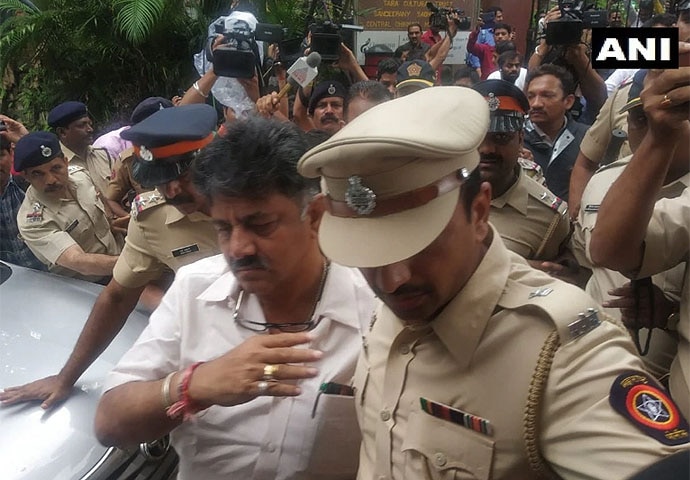 DK's Day Out: DK Shivakumar being taken away by police from the Renaissance Mumbai Convention Centre Hotel. (Photo: ANI)

Touch-and-go and shoot-and-scoot are easy tactics — but they are also ineffective. This is one lesson the Congress should pick up from the campaign it ran in the 2019 national elections. This is one lesson Rahul Gandhi could have taken — had he been good at taking lessons.

The other important lesson for Congress members and workers is to stop taking lessons from Rahul Gandhi.

And being in opposition is not enjoyable. It is an important political space. It is from here that you ensure you can become the voice of the people.

Yes, Modi is Prime Minister and Yogi is chief minister.

But Shivakumar has tried to show that in Karnataka, there is a Congress too.

Rahul Gandhi should take a lesson from Shivakumar on this.

Also read: A political drama of naked greed: How the Kar'nataka' played out and the MLAs rebelled

Post your comment
#Congress, #Amethi, #Rahul Gandhi, #Dk shivakumar
The views and opinions expressed in this article are those of the authors and do not necessarily reflect the official policy or position of DailyO.in or the India Today Group. The writers are solely responsible for any claims arising out of the contents of this article.