Back in Bihar after decades, the Congress has no cakewalk to welcome it

As the grand alliance is expected to aggressively entice backward communities, the Congress needs to wean away forward caste voters from the BJP.

As Rahul Gandhi said this just before he concluded his 30-minute speech at his party's February 3 'Jan Akanksha' (people's aspiration) rally in Patna, it was clear that the Congress President was focused on the winnability of RJD chief Lalu Prasad — a former chief minister convicted in five fodder scam cases, currently undergoing medical treatment in judicial custody.

As the RJD boss's political heir, Tejaswi Yadav, who shared the stage and also addressed the Congress rally, along with Sharad Yadav, Jitan Ram Manjhi and three newly elected Congress chief ministers, looked on with appreciation, it was clear that Rahul Gandhi — once known for tearing up an ordinance drafted by UPA, with the objective to save convicted politicians like Lalu from being barred from contesting polls, has turned a new page.

Lalu indeed assumes crucial significance in Bihar — a state with 40 Lok Sabha seats — because he holds sway over the largest chunk of the Muslim-Yadav vote bank in Bihar.

The two social groups are understood to have at least 31 per cent votes in Bihar — that's just 2 per cent more than the RJD-Congress joint tally of 29 per cent in the 2014 Lok Sabha elections.

The Congress-RJD alliance in Bihar looks good on paper. Many in this alliance fervently hope the NDA won't retain the 2014 tally of 31 seats they had bagged without Nitish Kumar, or repeat their 2009 tally of 32 seats that the BJP won in alliance with the Bihar CM. 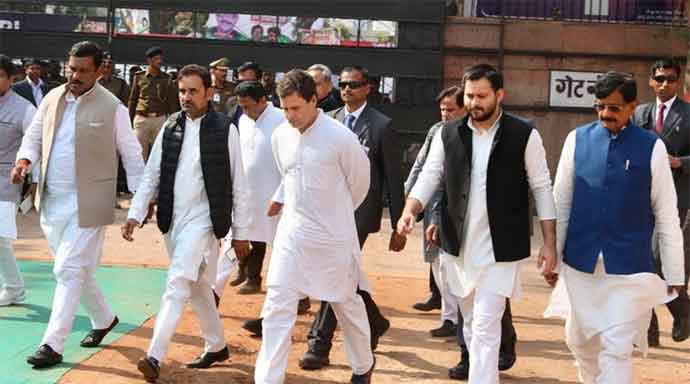 Back in Patna after long years. But where is Rahul going to from here? (Photo: PTI)

While Kushwaha claims support among the Kushwaha caste — the second largest backward caste in Bihar after the Yadavs — Manjhi has pockets of Dalit support, while Sahni banks on the numerically crucial fisherman caste. Though the parties of Manjhi and Sahni will contest their first Lok Sabha polls, and Kushwaha too is yet to prove his mettle, if the three leaders succeed in transferring even a portion of their support groups to the RJD-Congress combine, they can change the Bihar contest.

Incidentally, this was the first Congress rally in Patna after a gap of 28 years.

The last time, it was Rahul's father, Rajiv Gandhi, who had addressed a party rally at the same Gandhi Maidan in 1989.

The long gap not only tells a story about the grand old party's slide in the state — but also recent attempts to revive it.

"The bottom line about Rahul Gandhi's appearance in Bihar goes beyond this alliance politics," says a senior Congress leader. It's about Congress' attempts to carve a special place in the hearts of the voters again. How many did you say again? In Bihar, polls are contested overwhelmingly on caste calculations. (Photo: PTI)

"Remember how a Sonia Gandhi-led Congress in 2004 had snatched power from a government led by Atal Bihari Vajpayee, the tallest and most acceptable BJP leader? The Congress had then changed the political discourse by speaking about the humane face of development and exposed the BJP's 'India Shining' campaign. Just contextualise the two campaigns — while Sonia had promised revolutionary measures such as the rural job guarantee scheme MNREGA and the Food Security Act, Rahul Gandhi, in the run-up to the Lok Sabha polls now, has started speaking about minimum income guarantee programmes," said the senior Congress leader.

Clearly, he is hopeful for a similar response.

Rahul Gandhi's speech at Patna — where he cited examples of how the new Congress government in Chhattisgarh, Madhya Pradesh and Rajasthan had waived off farm loans as promised in the party's election campaign — again reaffirmed his attempts to position himself as a leader who listens to the voice of the underprivileged and keeps his promises to them.

As he reiterated his commitment to the Bihar alliance, Rahul's speech remained focused on the key failures of the NDA government, as the Congress party describes. He kept hammering the ruling NDA for their failure to create the promised two crore jobs every year, the inability to manage acute agrarian distress, continuing atrocities on Dalits, minorities and women, controversies about the Rafale Deal, even the lack of success in cleaning the Ganga.

Many believe Congress credibility has gone up, not only because of their recent victories in the three Hindi-speaking assembly states, but also because they have fulfilled their promise of loan waivers for farmers. But for the story in Bihar — where votes are only cast for caste — the party will have to bank upon its alliance partners.

And there lies another challenge — as the grand alliance is expected to bat aggressively for backward communities, the Congress is expected to wean away forward caste voters from the BJP.

Also read: Why the next political moves for 2019 will take place on Bihar's chessboard

Post your comment
#2019 Lok Sabha elections, #Tejashwi Yadav, #Rahul Gandhi, #Bihar
The views and opinions expressed in this article are those of the authors and do not necessarily reflect the official policy or position of DailyO.in or the India Today Group. The writers are solely responsible for any claims arising out of the contents of this article.