Can ‘lightweight’ Raj Babbar turn Congress’ fortunes in UP?

We need to see if his stardom and glamour, clean image and aggressive stance help him on the chessboard of caste politics.

For Raj Babbar, there has been three life-changing moments so far.

First was in 1980, when his debut movie Insaf Ka Tarazu, based on the bold theme of rape and the Indian judicial system, proved to be a landmark and most popular film ever made on this subject.

Raj Babbar played the role a creepy rapist with such perfection that it got embedded in the memories of people forever. Overnight, he established himself as one of the top villains in Indian film industry.

Second moment came in 2009 when as a Congress candidate in Lok Sabha by-election, he defeated Dimple Yadav, the daughter-in-law of Mulayum Singh Yadav and wife of Akhilesh Yadav in Firozabad, the stronghold of Samajwadi Party.

Dimple was making her political debut and the prestige of Yadav clan was at stake.

Also read: Is Prashant Kishor strategy for Congress in UP coming undone?

Raj Babbar was considered to be a lightweight till then and during the high-voltage campaigning, it was being perceived to be a one-sided battle.

But when the results were announced, to everyone's utter surprise, Raj Babbar had established himself as a hero.

In the run-up to the high-profile Uttar Pradesh Assembly elections, he has managed to outwit the all the usual suspects and became the president of Uttar Pradesh Congress Committee. 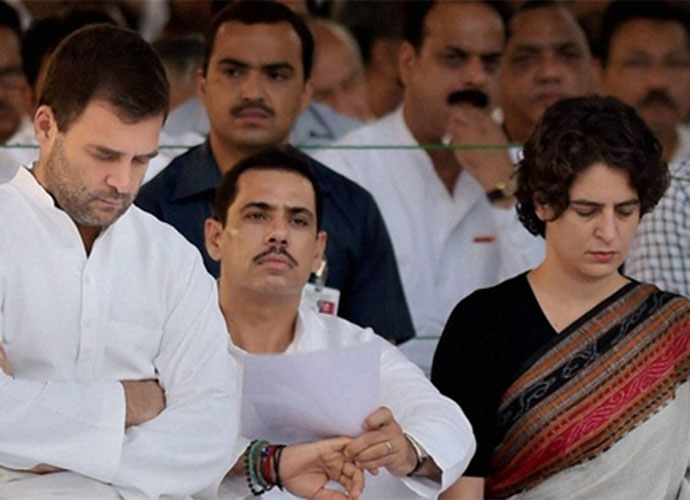 Will Priyanka Gandhi take the plunge this time?

That is he’s now the boss of the Congress party in the state which sends both Rahul Gandhi and Sonia Gandhi to Lok Sabha.

Among the several seasoned politicians who were being considered frontrunners for the post of UPCC chief, Raj Babbar was again thought to be a lightweight.

But the so-called frontrunners, such as Jitin Prasad, Pramod Tiwari, Rajesh Mishra, Salman Khurshid, PL Punia, ended up jeopardising each other's chances due to caste equations and other considerations.

Also read: How BJP hopes to encash Najma Heptulla's resignation in UP polls

It is interesting that in the political scenario of Uttar Pradesh, where caste is the most important talking point, Raj Babbar's caste remains a little known fact. He comes from Sunar (goldsmith) caste, which is under OBC in Uttar Pradesh.

The top bosses of the Congress probably think that his stardom and glamour, clean image and aggressive stance will overshadow his identity crisis on the chessboard of caste politics.

Announcing his name in Delhi, Ghulam Nabi Azad, the in-charge of Uttar Pradesh in Congress, said that "Raj Babbar is above caste".

Born in Tundla of Uttar Pradesh, where his father was a railways employee, Raj Babbar spent much of his time in Agra from where he got his education and later on, represented it twice in Lok Sabha as Samajwadi Party MP.

It was because of his bitter clash with Amar Singh that in 2006 he had to hop off Mulayam's cycle and hold Congress's hand.

He went on to become the giant-killer by defeating Dimple Yadav in 2009 by-elections.

But in 2014, he also had to the bear the ignominy of being defeated with highest ever margin of  5,67,000 votes by General VK Singh in Ghaziabad.

Congress later sent him to Rajya Sabha from Uttarakhand.

Now as the captain of the UP Congress, Raj Babbar has the onus on him to re-cultivate the vast land of UP, which has  proved to be barren for the Congress party in  last 27 years.

But Raj Babbar has been given a tight rope to walk on. Generally, it is considered the prerogative of the party chief to form his own team in consultation with the party high command.

But Raj Babbar was deprived of even this little privilege. Four vice-presidents of UPCC were thrust upon him from day one.

Moreover, he has to share his powers with Nirmal Khatri as the head of screening committee whom he is replacing as party president.

Among his vice presidents, he also has the notorious Imran Masood, who once wanted to chop off Modi into pieces. By choosing Masood, Congress has made it clear that is going to be very aggressive in wooing the Muslim voters, especially in west UP where beef is already being roasted in slow fire by its opponents.

Also read: Uniform Civil Code is a ploy for BJP to flame UP ahead of polls

It is clear from the fact that while BJP was lamenting the inclusion of Imran Masood in the Congress team, Suresh Rana, accused of inciting riots in Muzaffarnagar, secured a place in BJP's new team for UP, announced only few hours later.

Evidently, while choosing his deputies, the Congress high command was mainly focusing on the caste equations. One Brahmin as Rajesh Mishra, an OBC as Rajaram Pal, Bhagwati Prasad Chaudhry as a Dalit and finally Imran Masood as a Muslim face.

But apart from Rajesh Mishra to some extent, none of these leaders can claim to have the ability to swing the votes of their own caste in the favour of Congress. It is more of a symbolism for inclusive and competitive caste politics.

For Raj Babbar and his team, as for everyone else in the Congress party, the biggest question has yet not been answered by the party high command.

Will Priyanka take a plunge this time?

UP has proved to be a tough nut to crack for her brother Rahul, who learnt it the hard way in 2012 that aggressive and exhaustive campaigning necessarily does not mean so many seats.

Two hundred plus rallies and 28 out of 403 seats is a nightmare Rahul would certainly like to forget. But for Priyanka and Sonia, it is a cold, hard fact, difficult to ignore.

Priyanka Gandhi remains the last potent weapon that the Congress party has. The big question that seems to be bothering the Gandhi family - is the UP election right time to use it or should it be saved for 2019 Lok Sabha elections?

Amidst the hype and noise over Priyanka in UP, it is easy to forget that in 2012 Assembly elections she campaigned extensively in Amethi and Rae Bareli along with her husband Rober Vadra.

And the result was - Congress lost eight out of total ten seats in the constituency of Rahul Gandhi and Sonia Gandhi.

Time and again, it has been proved in the last three decades that people of Uttar Pradesh may show generosity towards Congress in Lok Sabha elections. But they don't trust Congress to lead the state.

Can Raj Babbar change this perception?

He is bang into the limelight now. Light, Camera, Action  - and the reel has started rolling.

In the most famous scene of Insaf Ka Tarazu, Raj Babbar, sitting in his revolving chair in a closed room, throws his key ring at the hapless Padmini Kolhapure and it gets hooked exactly where intended. And then, he pulls it off.

Can he pull it off again? The problem is - this time he is in the ring and the key is with the voters of UP.

And Congress has nowhere to run.

#Congress, #UP Polls 2017, #Raj Babbar
The views and opinions expressed in this article are those of the authors and do not necessarily reflect the official policy or position of DailyO.in or the India Today Group. The writers are solely responsible for any claims arising out of the contents of this article.